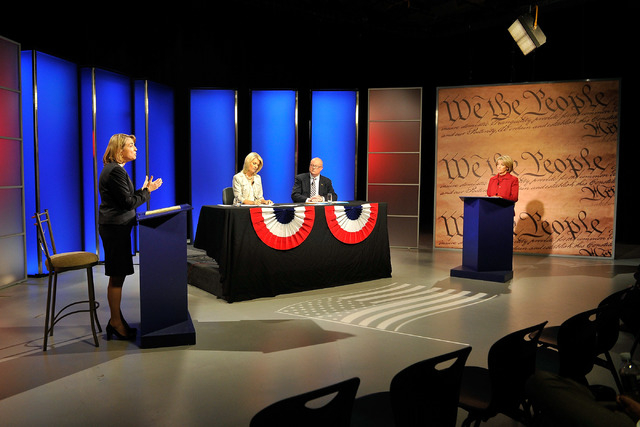 In their first debate in the secretary of state’s race, Nevada Treasurer Kate Marshall on Friday confronted state Sen. Barbara Cegavske about her record of not supporting campaign finance reform, saying voters want to “follow the money” to learn how candidates and officials spend contributions.

Cegavske, in turn, said she favors more transparency in reporting travel, gifts and campaign donations as frequently as once a month. But the Republican also noted that Democrats have controlled both houses of the Legislature for several sessions and didn’t press for such reform.

“I really think this is an area where I and my opponent are far apart,” Marshall said, noting Cegavske had voted against major campaign reform at least three times. “I think we can do a lot better.”

Marshall, a Democrat, noted that when the GOP ran the Senate, Cegavske was chair of the Legislative Operations and Election Committee, which was known as “the morgue of ethics reform.”

Cegavske, who ran the committee in 2005, said the panel reviewed more than 1,000 bills, including for campaign and ethics reforms. She suggested many of the bills didn’t get out of committee or were later killed because they had provisions either Republicans or Democrats couldn’t accept.

In the 2013 session, for example, a major campaign finance bill proposed by current Secretary of State Ross Miller died in conference committee. Cegavske had voted against it.

“Yes, I do think we need to have some reform,” Cegavske said, adding that lobbyists also need to report more often and be more forthcoming about how they’re spending money and on which lawmakers. “We need to make sure lobbyists are accountable as well.”

Specifically, Cegavske said she would favor candidates and officials having to report any cash on hand when they file their campaign reports. She also said “I have no problem with filing once a month and have everybody see what we take in.” She added that officials and candidates should report all trips, including “fact-finding” ones, which many critics characterize as junkets.

Still, Cegavske contended voters have never asked her for such financial information, saying reporters and her opponents were more interested in poring over the reports.

During the hour-long debate, Marshall brought up campaign finance several times, prompting Cegavske to remark that she “lavishly loves to talk about” the subject.

Early voting begins Oct. 18 and runs through Oct. 31. The general election is Nov. 4.

The candidates also were at odds over election issues with the secretary of state overseeing the process.

Cegavske, for example, said she favors instituting a voter ID law so registered voters must show some form of personal identification at the ballot box. Marshall is against voter ID, saying it’s unnecessary and it could disenfranchise some voters.

Neither candidate supported Miller’s proposal last year, however, to launch a photo ID book where registrars would have to check a voter’s photo against another source, such as the Department of Motor Vehicles. If there’s no photo, an election worker would take one. Marshall and Cegavske objected to the cost, which ranged from $800,000 to as much as $7 million.

On another issue, Cegavske said she would object to an open primary system, which allows voters to cross party lines at the ballot box or vote if they’re registered as non-partisan. She said the party system Nevada has now works. Marshall suggested Nevada closely watch how California’s open primary experiment goes and consider adopting it if the system is popular and works.

In an open primary, the top two vote-getters go on to the general election.

Although the race hasn’t received a lot of attention it’s nail-biter.

A new SurveyUSA poll commissioned by the Review-Journal, sister paper to the Pahrump Valley Times, showed Cegavske and Marshall in a statistical tie, 43-42, with the edge for Cegavske.

The telephone survey taken this past week has a margin of error of plus or minus 4.2 percentage points, making the race a toss-up.