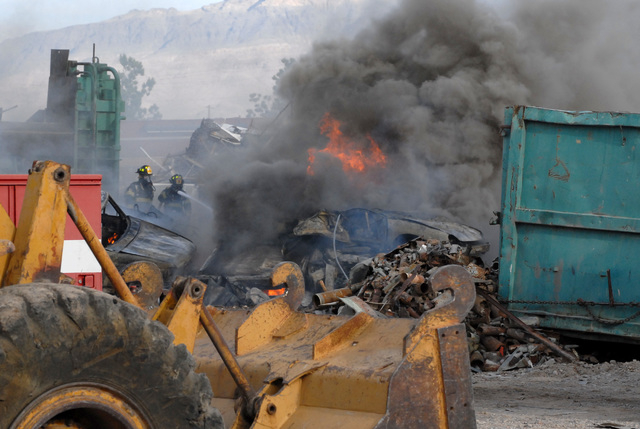 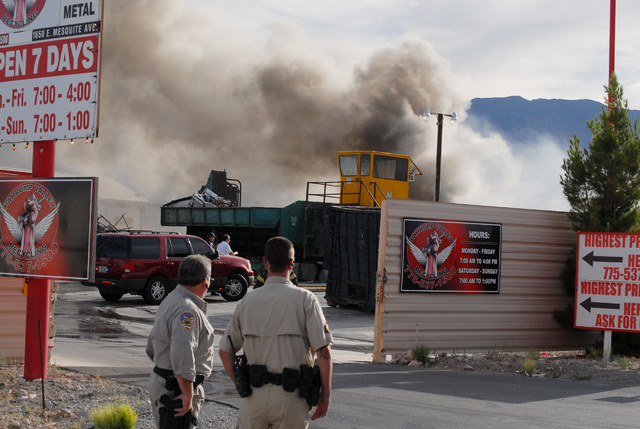 There were no injuries to report after Pahrump Valley Fire Rescue Services were called to extinguish a large fire at Pahrump Valley Recycling Wednesday morning.

Just after 7 a.m. Fire Chief Scott Lewis said PVFRS were called to the recycling business, located at 1650 E. Mesquite Ave., for a report of a fire.

When they arrived, he said crews found heavy fire conditions showing near the business’s equipment, buildings, and piles of scrap metal that were ready to be recycled.

The fire chief said PVFRS crew members quickly tapped into fire hydrants along Mesquite Avenue and began battling the blaze, managing to keep it away from the business’ mobile and stationary pieces of equipment as well as several of their buildings.

“One of the fortunate things in the case of this fire was there were hydrants all along Mesquite, so we hit those hydrants and had a sustained water supply,” Lewis said.

Firefighters were also able to keep the flames away from a large pile of shredded and intact tires at the location, which Lewis said could have made the situation much worse had they caught fire.

As of Wednesday afternoon it was unclear what started the blaze. Lewis said employees told firefighters they were moving some of the materials when they found the fire burning underneath an automobile that was sitting on the lot waiting to be recycled.

“They were operating the equipment, preparing this material to go into the scrapping machinery and when they moved an automobile there was a fire underneath of it, so they’re not sure at this point exactly what sparked it,” Lewis said.