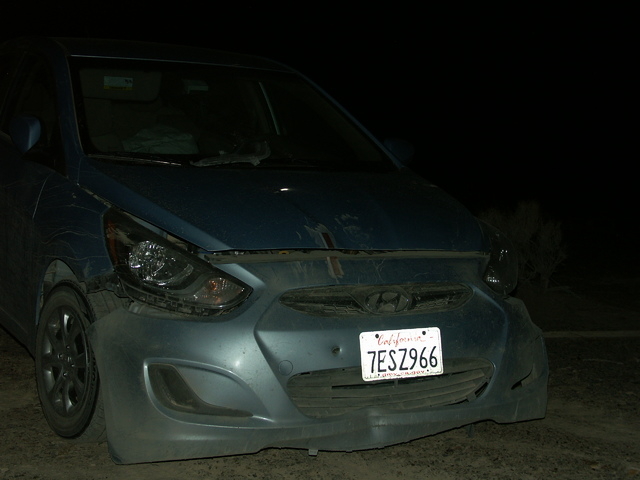 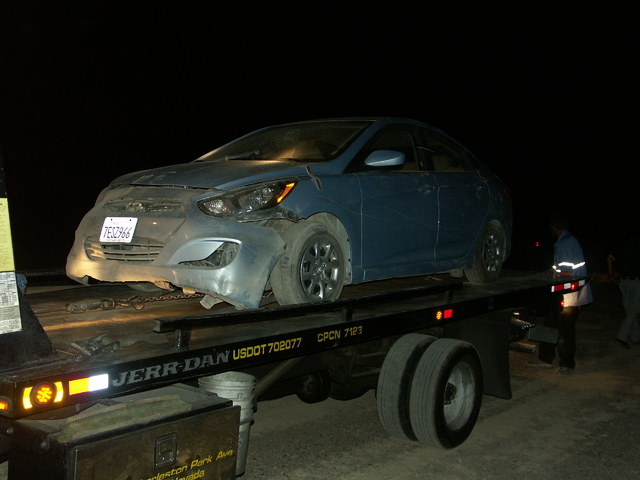 The rented vehicle a southern California woman was driving before her body was discovered last month in the desert along Hafen Ranch Road has been found.

Nye County Sheriff Tony DeMeo said a joint effort between Las Vegas Metropolitan Police Department air crew and local authorities led to the discovery of the vehicle in a dry ravine, just a few miles from where the body of Margay Edwards was found. Her cell phone was recovered inside the vehicle.

He noted that Nye County detectives had reason to believe the vehicle was still in the area, but did not elaborate further.

“Through our discussions with Las Vegas authorities, I put out an order for our units to start searching a two-mile radius around where the body was found,” DeMeo said. “We were sure with a high degree of certainty that the car was still in the Pahrump Valley. Based upon the search plan that we had, and the vastness of the area, we probably would have found the car in three to four weeks. It’s a very rugged area.”

Her body was found roughly a mile from where, according to Edward’s father, his 27-year-old daughter’s friends reside on the south end of town.

DeMeo and the department have declined to discuss details of the ongoing criminal investigation, including any possible persons of interest. Law enforcement is waiting for the cause of death to be determined after sending the badly decomposed body to Texas.

A Las Vegas police helicopter pilot spotted the car roughly three miles from the roadway in the ravine partially hidden by brush. Due to the vehicle’s remote location and rugged terrain, local authorities were forced to use ATV’s to get to the victim’s car, which sustained considerable front-end damage.

DeMeo said the discovery of the car provided detectives with valuable additional information surrounding the case. The car had sustained considerable front-end damage when detectives located it after a several-hour search.

“Las Vegas Metro Air provided a lot of support,” DeMeo said. “This find was very helpful with this case and we have a warrant to go through the vehicle. We’re treating the vehicle as if it was a criminal investigation. At this point, that’s where we are right now. Metro Air was able to cover areas that was difficult for our ground crews to traverse. It was amazing where this vehicle went and the damage it suffered when it went into the ravine.”

DeMeo also said the area where Edwards’ car was located, is not a common route of travel for locals.

“The car was on fresh ground,” DeMeo said. “From what we could see past a certain point, there was no other ATV or off-road vehicle activity. The only tracks out there were the tracks from Margay’s vehicle.”

The investigation into the death continues to make national news as DeMeo and father Jeff Edwards appeared on CNN news again Monday to discuss the case. He also appeared on CNN on Thursday.

The sheriff also said attention should not be lost on what the Edwards family is experiencing at present.

“The family lost their daughter and family member,” DeMeo said. “The family right now is more important to us.”

Though numerous media outlets around the country have said Edwards ‘death is a homicide, DeMeo insists that his department still considers the case a criminal investigation.

“As sheriff, I tell my people, every crime scene, especially where someone loses their life, has to be treated initially, as if it were a crime scene,” DeMeo said. “You only get one opportunity to preserve the evidence at the scene. If you look at something and make a presupposition, that it looks like death by natural causes, you’re going to miss critical evidence that turns out to be a crime.”

Jeff Edwards, meanwhile, said he believes the couple his daughter was visiting late last month know exactly what happened to her.