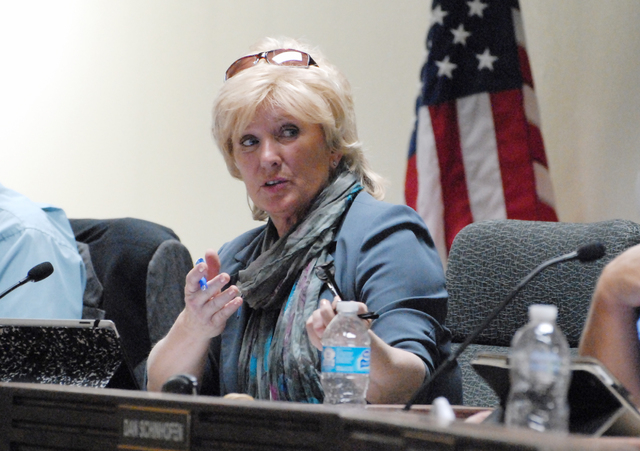 The application will be submitted to the Nevada Office of Criminal Justice Assistance as the motion, passed by a 3-2 vote. The county will have to contribute $151,660 as a local match and is requesting $140,582 in federal funds. The request from the sheriff’s office says the county has participated in this grant program for at least 15 years.

Carbone wanted to fit the employees into the regular budget instead of paying them with grants.

“We’re looking at a way to save taxpayers money. This is one way to offset the cost while maintaining a level of service within the sheriff’s office, particularly in enforcing narcotics laws within Nye County,” Marshall said.

“If in fact this goes away and we don’t accept for you guys, don’t go out for this grant again, what does that do to you?” Carbone asked.

“That would dissolve the narcotics team depending on what the commissioners approve for the level of funding. Employees could possibly be laid off,” Marshall replied.

Then Cox chimed in with questions.

“Could you tell me why we need to have more narcotics detectives? Has there been an increase in the drugs? Is this a warning? Is this something you’re expecting, more problems?” Cox asked.

Marshall said the grant doesn’t add officers but maintains their current staff. He didn’t have figures on whether there’s been an increase in drug activity.

“If we have all these narcotics officers and we need to keep them on, we need to kind of justify why we’re doing this. Are we making any progress on the war against drugs in this valley?” Cox asked.

“I’d like to know if we’re hiring all these detectives are we doing any good or not and I’d kind of like to know what the statistics are on this, are we going backwards of forwards?” Cox asked.

Upon further questioning, Marshall said the employees receiving that grant wouldn’t be on the bottom of the list of employees to be laid off if the grant wasn’t funded. Layoffs would be based on seniority according to the collective bargaining agreement.

District Attorney Brian Kunzi said the commission doesn’t have the authority to determine how many narcotics detectives are hired in the sheriff’s office. They only have authority to give resources to the sheriff, who has the discretion to use it as he sees fit.

“This can’t be a debate on if we will lose any narcotics officers if this grant goes away,” Kunzi said.

Wichman explained her support for the item.

“Any time that this commission has the opportunity to attract the taxes that the taxpayers in this county have sent to the federal government I will do it. Yes, you have to be aware of what strings are attached,” she said.