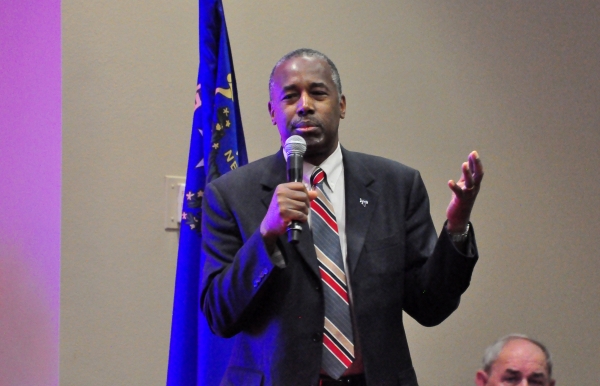 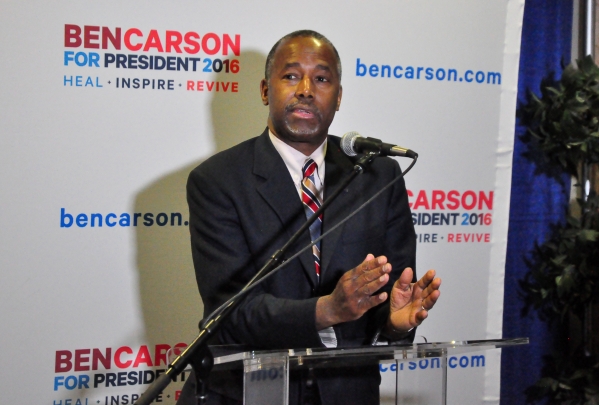 A Republican presidential candidate had a full house during his Pahrump visit on Monday morning with many would-be attendees being left outside, as several hundred people filled the allowed space to over-capacity.

Carson’s first visit to the most populous town in Nye County happened as he is trying to ramp up his campaign efforts in Nevada and regain the lead in the crowded GOP pool.

The Pahrump Nugget Hotel and Casino, where the Carson campaign hosted an early morning rally, was filled to over-capacity before 10 a.m., and security staff were turning around people and some of the media crews.

Margie Mathews, a snowbird from Washington who was turned around by one of security staff members, said she was frustrated about it.

“Everybody should be able to meet him, right? I didn’t know he was going to be here,” she said.

In an interview with the Pahrump Valley Times, the one-time Republican front-runner said his biggest challenge ahead of the next GOP presidential debate that will take place in Las Vegas on Dec.15 is going to be getting his message to people.

Carson is currently trailing real estate mogul Donald Trump, who surged to the top of the Republican polls after his remarks on national security in the light of terrorist attacks in Paris.

Meanwhile, Carson has faced a notable slippage in the polls following increased scrutiny from the media briefly after his foray to the top of the GOP field.

Some questioned whether the retired neurosurgeon had a good grasp on foreign policy after his comments on Syria and the Islamic State. Carson told the Pahrump Valley Times that the media is trying to portray him “as somebody who doesn’t know anything.”

“You know, we have taken a hit, I’m amazed that it’s a small hit with this incessant barrage. I’ve never seen anything like it by the media. You have something like a map that’s generated inappropriately by a computer, by some staff member,” he said.

“Obviously, they are very concerned about me, which is good,” he said about media. “We just keep pushing our message, calm, logical. And a message about solutions, not a message about attacking other people or acting like politicians,” he added.

In an interview, Carson called terrorism the biggest threat to the United States.

“Right now, terrorism is a huge threat. They have already declared their intention to hit us. And you know we need to be thinking about what can we do to stop this,” he said.

“The other part of national security for us is recognizing who our enemies are and engaging them elsewhere, so we don’t have to engage them here,” he added.

Addressing the issue of Syrian refugees, Carson said aiding those who flee war-torn Syria could be done multilaterally, as opposed to resettling them in the United States.

“We spent disproportionately more on the refugee crisis than any other European countries or anybody else,” he said. “And sometimes, nobody seems to recognize that and think that we have to do everything, but we should be getting everybody involved. This is an international crisis, this is not just a crisis for these Syrian refugees and the United States. So establishing the safe zones, being able to maintain them, providing them with humanitarian services, food, water, medicines and working hard to get them resettled in that part of the world, not here. And ultimately, working hard to try to establish peace in Syria, so that they can be resettled in their own country.”

“I’m seriously thinking about him as my candidate now,” she said.

Kathy Hawk and Karen Osborn, who came out of the event holding Carson campaign yard signs said they would vote for Ben Carson over Donald Trump, who currently leads the GOP pack.

“I think he is strong in his political views and his views in general. I don’t know if he can take it over the top, personally,” she said. “I really believe in what he is saying, but I don’t know if he is capable of beating Trump.”