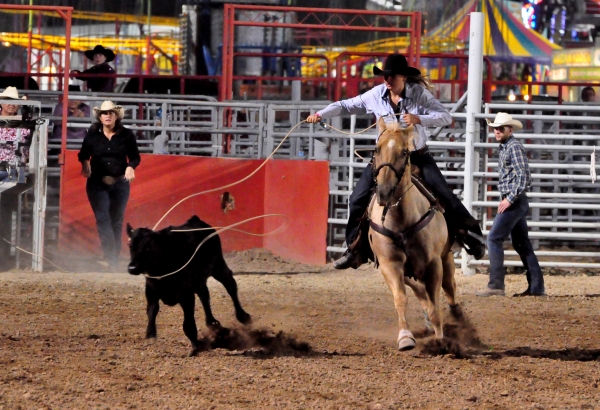 The latest edition of the Fall Festival came and went last weekend, and with it marked the first time in its rich history the Pahrump Valley Chamber of Commerce ran the event.

Chamber of Commerce Chief Executive Officer Salli Kerr couldn’t have been happier with how the four-day event unfolded.

“I would say the chamber is really pleased with how the first year went,” Kerr said. “We had great vendor response, we had a lot of public support, and I really want to thank anyone that was involved in any capacity.”

Three of the bigger events went off without a hitch, giving festival goers a lot to be happy about. The parade, the rodeo and arts and crafts all ran smoothly, while the carnival thrilled attendees.

Kerr was excited with how the parade unfolded and appreciated all the extensive work all the participants put in.

“The parade was just a wonderful event,” she said. “We had lots of new entries and we were really pleased that we had so many spaces and that we had people that made it very difficult to judge the best things, because a lot of people put a ton of effort to make some nice floats.”

A group of five judges voted on each float that entered into the judged category, in which they were vying for honors and prizes provided by sponsors of each award.

There were five categories the float teams could enter, in which were four awarded by the judges and one was voted on by the public on Facebook the week after the event. The float owners were competing for bragging rights and different gift baskets provided by the sponsor of each award.

The rodeo that ran Friday night and Saturday night saw a packed house each night, with families taking advantage of ticket deals.

“The rodeo was outstanding. We had a full Friday night, lots of people took advantage of being able to bring a child or a senior for free,” Kerr said. “Saturday night the stands were full and the rodeo halftime show was amazing.”

Despite a miscalculation that saw two more rides at the carnival this year than in years past, Kerr said even with that, ridership sufficed.

“The turnout for the carnival was great,” Kerr said. “They ended up bringing a few extra rides … but it seemed like they were busy and happy. It’s always amazing to see them build that mini city back there, so I think that overall that everybody was really happy with the crowds.”

Kerr said that with the success of the free fun, which included a pie-eating contest, a pumpkin carving contest and a cutest pet contest among other events, that the chamber is already planning to add new events to the free family fun lineup for next year.

“We’ll add some games, some three-legged races and such,” she said. “We want to continue to add games to ensure it grows bigger and bigger each year.”

After running the event for the first time, Kerr explained that she was more than happy with the results and said there were spots they can build off of in the future.

“Of course in an event this big, in every phase of it there was something that we could do better,” Kerr said. “We are recapping these things with all the committees while the ideas are fresh on things we can improve upon next year. You can say that we’re already planning for next year’s event, because we are literally right now writing down the things that we’d change to make next year’s event better.

“That being said, I don’t think there is a baseline to work from that could’ve been any better than the experience that we had.”

With how close-knit the valley is, Kerr said that overall the success of the Fall Festival is owed to the residents.

“Everybody came together as a community to make this event what it was and made Pahrump shine,” Kerr said.

Displaying how successful the festival was, Kerr said that those who sold goods at the event are already set to go for next year’s edition.

“We’ve already had 30 vendors sign up for next year’s event, they were literally doing their presale applications as they left the park,” she said. “So vendors are already planning to come back and that’s always a great sign.”