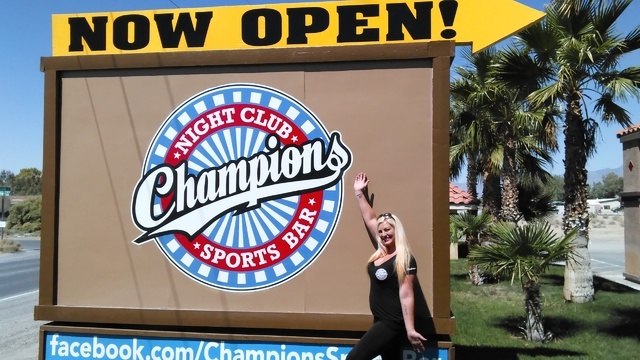 Champions Sports Bar owner Brandi Tassler said her new establishment will be the ‘place to be’ for locals looking to have a good time. The business is located at 631 Linda St. Selwyn Harris / Pahrump Valley Times

A longtime Pahrump tavern has reopened its doors after shutting down several years ago.

She said with multiple pool tables, dartboards, two stages, and a DJ booth, Champions will be a must-stop for all those who are looking to have a good time.

“This is definitely going to be the place to be,” she said. “We have 10 pool tables and three dartboards and we plan to start some leagues here. I heard that there are a few dartboard leagues in town and we will definitely be on one.”

Many local residents may not know Champions is part of a chain of sports bars based in the West.

The Pahrump location, Tassler said, began doing business at its current location roughly 15 years ago, after her father purchased and renamed the bar.

“We are the ones who bought it from the owners of Sam’s Place,” she said. “We did a lot of renovations and have owned it ever since. Before coming to Pahrump, I was in northern Idaho doing training and running our other Champions locations about an hour from Coeur d’Alene.”

Though several area sports bars are devoted to one particular NFL team, Tassler said Champions supports all 32 teams in the National Football League and has all of the big screen televisions to prove it.

“We love all of them here,” she said. “We have updated our television screens and refelted all of our pool tables. We just recently bought TouchTunes, which is like the karaoke machine, jukebox and photo booth all in one.”

Additionally, Tassler said Champions not only has the widest selection of liquor in town, the bar also offers drinks and shots of the month.

“There is nothing that you can ask for that we don’t have,” she said. “This month our drink is ‘Adios Mother Fu***r’ and they are on sale for $5 this month. Our shot of the month is a Fireball for $3, and all month our domestic beer tubs, which are 32 ounces, those are just $4, which is super cheap and we are the only place in town who does the tubs. We also have $1 pints of Rolling Rock and PBR. They are the best deals in town.”

Tassler also said she has plans to have live bands perform at Champions on weekends, as well as expanding the kitchen.

“We will eventually be expanding to a full-service kitchen but right now, we are just doing wings, poppers and mozzarella sticks,” she said. “We will also have live bands but we haven’t lined anything up because it’s still a bit too early. We just want people to come on out and have a good time. We look forward to being a big part of our community and we just want people to enjoy themselves and have a new place to party.”