Studio 401 Children's artwork on display at the Beatty Community Center on July 29, 2017 with paper mache rabbit "Thumper" in the center. Artwork was produced by children from that attended a free summer art camp by Studio 401 in Beatty. 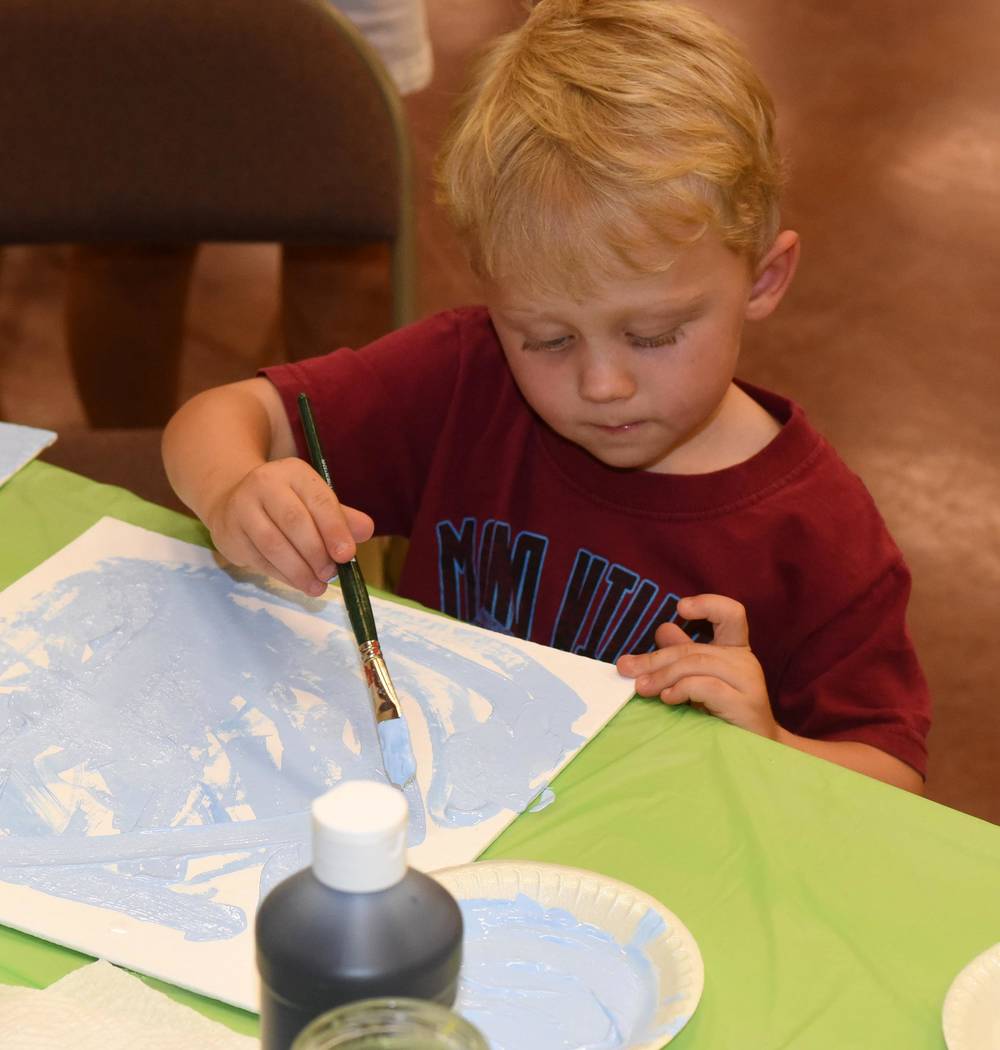 Studio 401 Parker Rogers, an artist from Beatty-based Studio 401 that offers a free summer art camp, paints a blue sky "donor square." Each square, one of 24, was available for a $10 donation to help fund the 2018 camp. Another set of 24 squares was also available at the show as well.

The works in the show were produced by children attending Studio 401’s free summer art camp, which started July 7 and ended July 27.

Studio 401 is an arts and crafts studio and shop at 401 Main Street in Beatty operated by Mary Seale and Anne Grace.

Seale said that they started out with 22 children in the program the first week, but they lost momentum when they had to skip a week to accommodate the D.A.R.E. program. They finished up with 12-14 participants.

The show displayed a variety of individual works by the children, including watercolors, painted rocks, thumbprint paintings, perpetual calendars, dream catchers, and yarn bowls, in addition to “naturescapes” and “nature mobiles” made from sticks, feathers, and other found natural materials.

Grace said that when she was young she saw a beautiful pastel painting and wanted to try her hand at doing one. She went to an art supply store and was overwhelmed by the variety of art materials that were totally unknown to her. So she said one objective of the camp was to show the children that they could make art with simple, inexpensive things.

Standing proudly in the center of the show was the children’s group project, a giant chickenwire and paper-mache rabbit the children christened “Thumper.”

The women thanked the Beatty Volunteer Ambulance Service, the Beatty Water and Sanitation District, and the Beatty VFW and Auxiliary for helping to fund the camp. To help fund next year’s camp, they were giving patrons an opportunity to contribute to two large paintings.

They divided two pictures into 24 squares apiece. Each square was to be reproduced in paint on a much larger square of paper, each of which was available for a $10 donation.

Once all the large squares are painted, they will be assembled into the large versions of the original and will be displayed in the Beatty Community Center along with the names of the donors.

In addition to the summer camp for children, Studio 401 holds art and craft classes and workshops throughout the year and sells work produced by local artists and crafters.