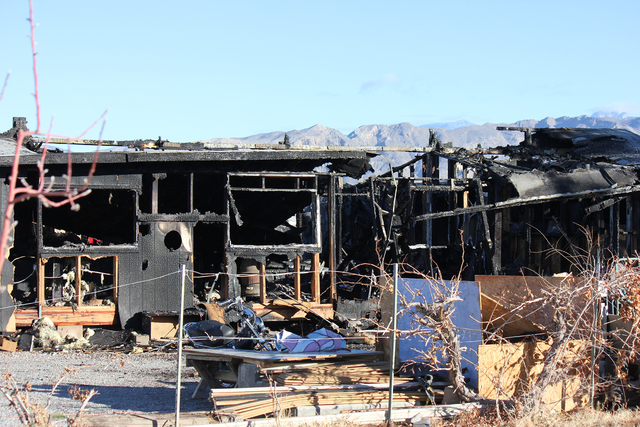 A local woman’s home was destroyed by a fire on Christmas day, leaving her and two roommates seeking a place to stay and losing nearly everything.

According to Pahrump Valley Fire and Rescue Chief Scott Lewis, the call came in at approximately 11 p.m. on Thursday night involving a home on Doubletree Road.

Lewis said that when the engine arrived the 2,500-square-foot modular home was, “approximately 75 percent involved.”

“There was a heavy fire that consumed the roof of the home. However, there were no injuries,” Lewis said.

Homeowner Candy Kirk and her two roommates were not home at the time the fire broke out. Kirk said she has lived in the home for the past three years.

The Red Cross is helping to assist the displaced residents.

“Thank God nobody was home,” Kirk said. “The Red Cross has already been here and they gave us a voucher for the next two or three days, I think.”

Michael Knight, one of Kirk’s roommates, said that they lost everything in the fire.

“We really need just about everything,” Knight said. “We lost everything, clothes, socks, shoes, you name it. We just had a brand new stove and refrigerator delivered and set up last week.”

Kirk explained that Knight had just finished putting brand new carpet throughout the back of the home.

There was a recreational vehicle parked in the back of the property, however, the fire never spread to the vehicle.

Lewis said that he is not sure what caused the fire but that it is currently under investigation.

The fire department was sent out again on Friday morning to put out additional hot spots to ensure that any glowing embers were extinguished properly.