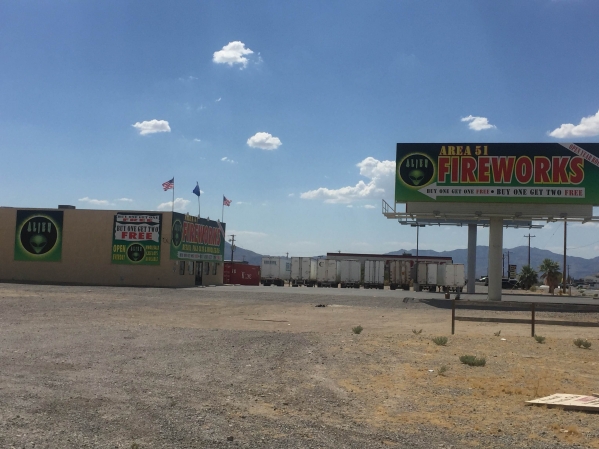 Clark County is fed up with Las Vegans firing off illegal fireworks on Independence Day and they have plans to curb the banned items, which includes possibly targeting Nye County.

At the Aug. 18 Clark County Board of Commissioners meeting in Las Vegas the subject was spoken on by various board members, fire officials, police and others.

“This past Fourth of July was pretty ridiculous,” Commissioner Lawrence Weekly said. “Don’t get me wrong here, I love a good fireworks show. But when it gets down to a point where the neighborhood firework shows become better than the Grucci shows at Cashman Field or over on the Las Vegas strip, there’s a problem.

“Especially when the fireworks shows continue at two and three in the morning.”

Commissioner Larry Brown explained that he believes targeting areas selling the illegal items is the way to curb usage in Las Vegas.

“I don’t see the purpose of allowing these in any county if they’re illegal here. I’d at least take a look at trying to identify where they’re coming from… I’d be interested in if we can start attacking the source point of sales.”

Taking a similar stance, Commissioner Steve Sisolak wondered why fireworks illegal elsewhere were available for purchase over the hump.

“If we could reach out to Pahrump and see why they allow this. Is this a revenue thing that they allow this for,” Steve Sisolak said. “They’ve gotta be having the same problems as us.”

Nye County Commissioner Frank Carbone said that no one from Clark County has reached out to him yet, but did mention that the monetary benefit of selling fireworks is key to allowing their sale.

Carbone went on to explain that the fireworks are also illegal to shoot in Nye County, except for designated firing zones that Pahrump has to shoot off fireworks during Fourth of July, which requires a permit and are supervised. Carbone mentioned that he would recommend something similar to Clark County officials if they call.

Clark County Fire Chief Greg Castle put together a presentation pointing out things that were related to firework codes and laws in Las Vegas and the issues their use present to the city.

Castle said that the board has jurisdiction to create ordinances to prohibit the use of fireworks, and that only the safe and sane fireworks that are sold from June 28 until July 4 are legal in Clark County.

“Our biggest issue is illegal fireworks that are illegal in this county, but sold outside of the county or sold at the Moapa Indian Reservation,” Castle said.

Castle went on to explain the issues those illegal fireworks pose, which included impact on public safety providers, late night sound pollution, risk of property damage and safety concerns including injury and death.

The problem has only gotten worse over the last decade Castle said, as it went from a few groups using the illegal fireworks, to a widespread issue with “no boundaries where this is taking place.”

Also pointed out was the limited staffing for both the fire department and the Las Vegas Metropolitan Police Department. That shortfall results in less enforcement, collection, and disposal of illegal fireworks, according to Castle.

“It’s very frustrating when folks are using illegal fireworks and causing safety hazards, which essentially impact their neighbors,” said Director of Intergovernmental Services for Metro Chuck Calloway. “The main problem for law enforcement is resources. We have on any given shift, 16 to 20 officers on a normal day working a particular area command.

“This last Fourth of July we had approximately 13,000 calls for service and of those 13,000, about 600 of them were directly related to fireworks.”

Of those 600 calls Calloway said that police responded to around 100 of those calls.

Even if officers show up to a residence where illegal fireworks are being used, since it’s a misdemeanor to use fireworks, police have to actually catch the suspect in the act of using the fireworks to cite the person. If a person is willing to do a citizen’s arrest or complaint an officer can also then issue a citation, according to Calloway.

It remains to be seen what can and will be done regarding the sale of illegal fireworks in Pahrump and Moapa, but the issue is set to be discussed again within the next 60 days. During that time Clark County officials are set to develop a plan of action and speak with Nye County board members and Moapa Reservation representatives as well.