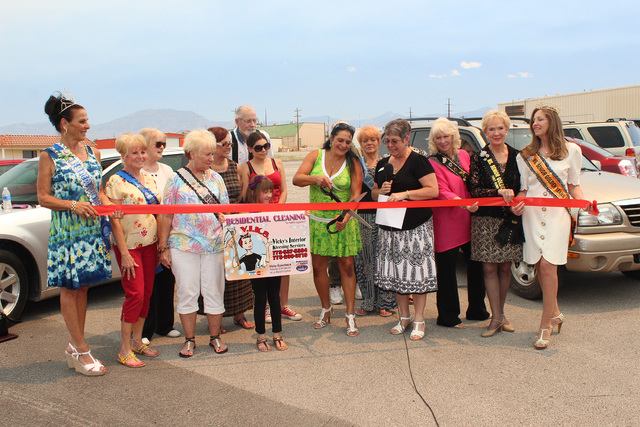 V.I.K.S Vicky’s Interior Kleening Service has been a member of the Pahrump Valley Chamber of Commerce for over a year now, but owner Vicky Eyserbeck wasn’t aware that she could have a ribbon cutting ceremony back when she first joined.

Eyserbeck was too caught up in the business side of things to think about the ribbon cutting, so a year went and passed without her official welcoming to the chamber.

After figuring out holding the ribbon-cutting would be a good way to help get the word out about her business, Eyserbeck thought now was as good of a time as any to hold the event and did so June 25.

“The ribbon cutting was nice,” she said. “It was a good thing for me. People saw it, and I have gotten feedback from it… It was a great thing to have happen, but I probably should have done it a year ago.”

Vicky’s Interior Kleening Service first started officially three years ago when the business obtained its license, after the company Eyserbeck was working for dissolved.

“When it took a hit I had to venture off and do other things instead closing the doors to the construction company, which we have, Silverbrook Homes, we just downsized and all went in different ways that we had,” she said. We had customers that we built homes for them and they retained me after they purchased their home and it just slowly started to build up that way.”

The business cleans everything from residential, commercial, industrial and new construction, as Eyserbeck didn’t want to pigeonhole the company as just a home cleaning service.

During her first year with the chamber Eyserbeck had some issues with her phone number, as she was in a dispute with a cellphone carrier over her phone number. The one listed on the business cards they were handing out was out of service for some time.

“I had some mishaps with my phone so I lost that number, so people would call and think that I was out of business, but I wasn’t,” Eyserbeck said. “I wasn’t going to get a new phone because I was fighting Verizon … to get my phone back because they wanted to do a breach of contract. I paid for a phone that I couldn’t even use.

“So I finally got that taken care of and my number that is actually on my business card is back the same, the way it should have been.”

With a few years under her belt with the cleaning service, Eyserbeck said her business has grown enough for her to work solely in town and not need to travel elsewhere for extra work.

“Before I got licensed I would work a week here and a week in California because I didn’t have enough work here,” she said. “It’s only been two years since I’ve had enough work to stay here.”

Eyserbeck finally got her business license after an issue came about after working with another local business on a cleanup.

“I had insurance companies and Nye County Flood Response who would use me and they get paid through insurance companies as well and I thought, ‘Oh shoot there’s going to be a glitch because I am not licensed,’” she said. “So I went ahead and got licensed which has been beneficial to me because I had to get licensed by the state and of course the town. It’s just better to be licensed.”

Although the business is cleaning, Eyserbeck explained that not everyone is just interested in her cleaning services.

“It’s just not about the cleaning, I have got customers that want to talk to you for an hour, or may want you to go in the backyard and pull a weed or do something instead of working. It’s just really about being there for them,” she said.

There is a four-hour minimum for Vicky’s Interior Kleening to come out to a site, but she said depending on travel she is willing to work with clients.

She also works with customers on her pricing, as she has a $25 per hour rate for residential, but offers 10 percent off to military, firefighters, law enforcement, disabled and senior citizens. In addition, she also gives customers who are frequent referrals an extra price cut as well.

The biggest challenge of running the business, which she is the only full-time employee and has four part-time workers, is handling multiple sites in a day.

“Just balancing everything,” she said. “Juggling to get things done, but sometimes I am pulling my hair out as far as which way to go and what to do. That’s challenging.”

In the future Eyserbeck hopes to grow her business to the point where she is not doing the physical work, but has more of a behind-the-scenes role.

“My goal is to be able to drive around and make sure all these customers are happy for whatever it is that they are having done,” she said. “That the people that are out there are working and doing the right things and that quality is being met.

If you are interested in the services that V.I.K.S Vicky’s Interior Kleening Service has to offer you can contact Vicky Eyserbeck at 775-209-0719.