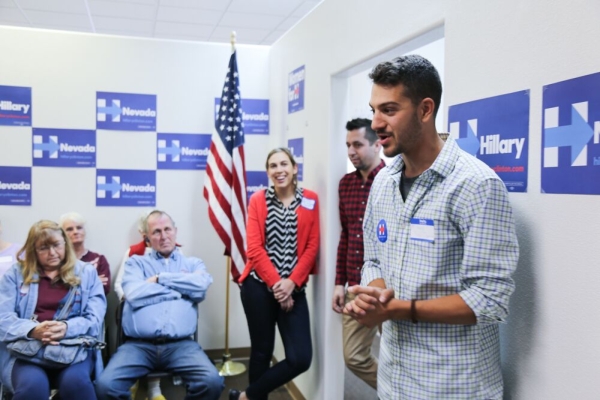 The presidential campaign for Hillary Clinton celebrated the opening of its fifth Nevada office in Pahrump on Saturday afternoon.

The space, located at 1231 East Basin Avenue in Pahrump, will serve as a center for volunteer training, launching canvasses and phone banking. The campaign also has offices in Las Vegas, Henderson, Carson City and Reno.

Alana Mounce, deputy organizing director for the Clinton campaign in Nevada, said one of the main objectives of the Pahrump headquarters is educating residents on the importance of the Nevada Democratic Presidential Caucus that will take place on Feb. 20, 2016.

“I think the most important thing that we are focused on is making sure Nevadans know about the importance of the caucus, and it’s a pretty new process here,” Mounce said. “Unlike Iowa, where people are very familiar with the caucus process, we have to do a lot of caucus education with our volunteers and supporters in making sure that it’s important to caucus on Feb. 20, and we believe that if she wins the caucus on Feb. 20 here in Nevada, that will be helpful in ensuring that she will be the presidential nominee for the (Democratic) Party.”

As the Clinton campaign tries to make inroads in a Republican-leaning Pahrump, Mounce said its statewide strategy aims to put organizers and precinct captains in “every single” community.

“We have found a lot of excited Democrat supporters who are thankful and happy we are here giving them an opportunity to get involved in the community to meet their neighbors, to build a connection and share values with Hillary Clinton,” she said. “I think we have a lot of excitement and enthusiasm here that will help push people to go to the Democratic Caucus.”

Between eating cookies and light snacks offered at the event, those in attendance talked about why they were interested in the Clinton campaign. Many of Clinton’s supporters said they had been involved in previous Democratic campaigns.

“I want Hillary as president,” Rupp said. “I support what she believes in when it comes to education, rights for veterans, the importance that she places on a family, and I believe that she is the best candidate. She has experience that does not end, I think she only complemented her previous experience by the four years that she was secretary of state and I think it’s time that, to be quite honest, that we get a woman in as president.”

Over the last summer, campaign representatives traveled over 1,200 miles across the state to hear concerns and propositions from Nevadans in numerous communities.

Henry Engelstein, field organizer for Pahrump, called the opening of the office a “direct testament” to the work that local Democratic supporters put in the organization that they have been building since April when Clinton started assembling her campaign staff in Nevada.

“Bringing new people in every day is something that I really feel strongly about and that’s how we are going to win and make sure that Hillary wins the caucus on Feb. 20 here in Nevada, so that she can be the Democrat in November to take on the Republicans and make sure that she is going to be the next president of the United States,” he said.

It’s not clear whether Clinton will visit Pahrump, as her campaign representative said they are still planning future trips.