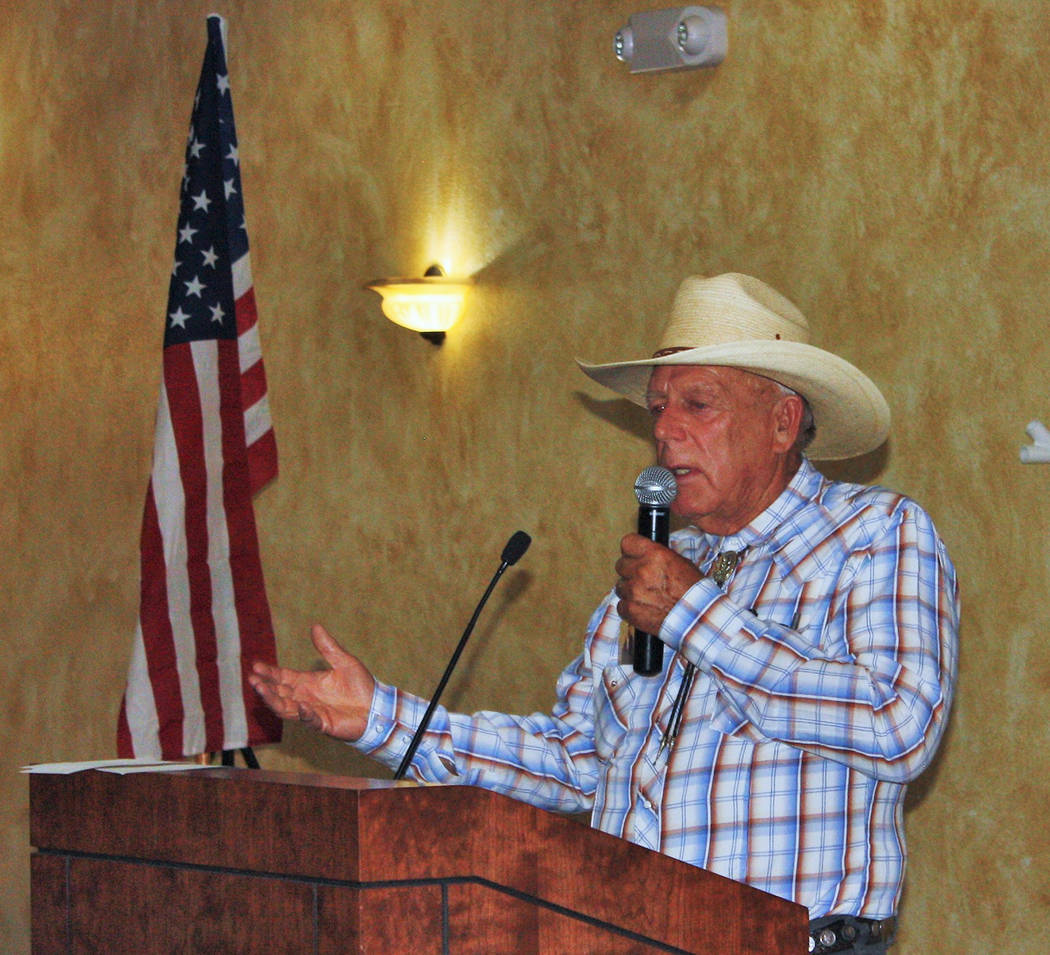 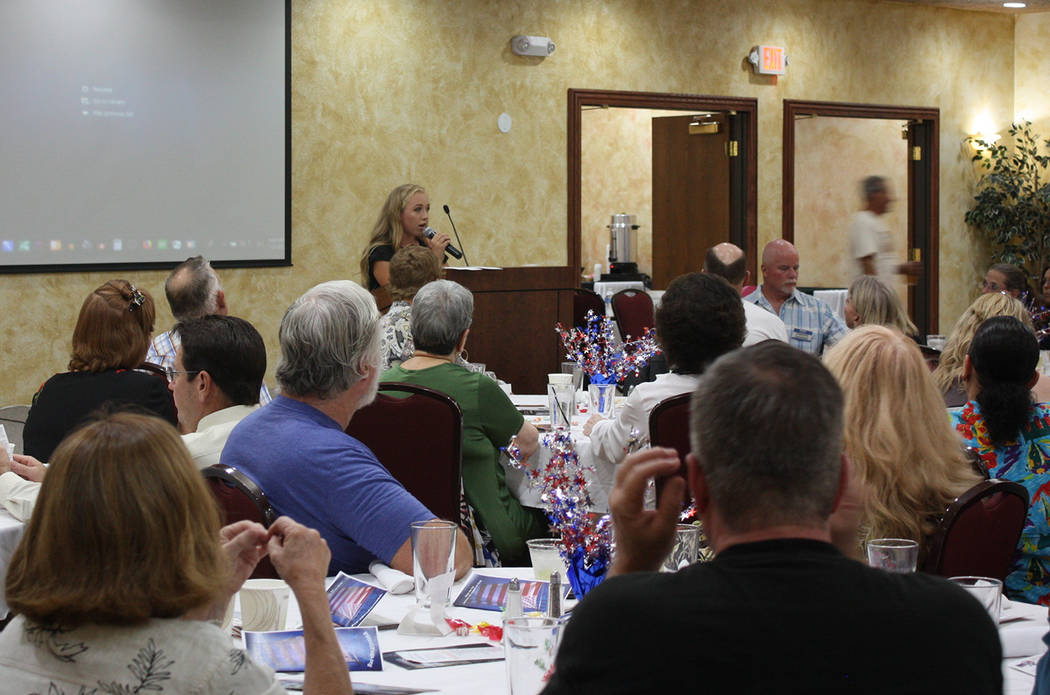 Robin Hebrock/Pahrump Valley Times Cliven Bundy's granddaughter Jamie accompanied him to the IAP-sponsored dinner and also spoke, partially focusing on entreating residents to vote for her father Ryan Bundy, who is making a bid for Nevada governor. 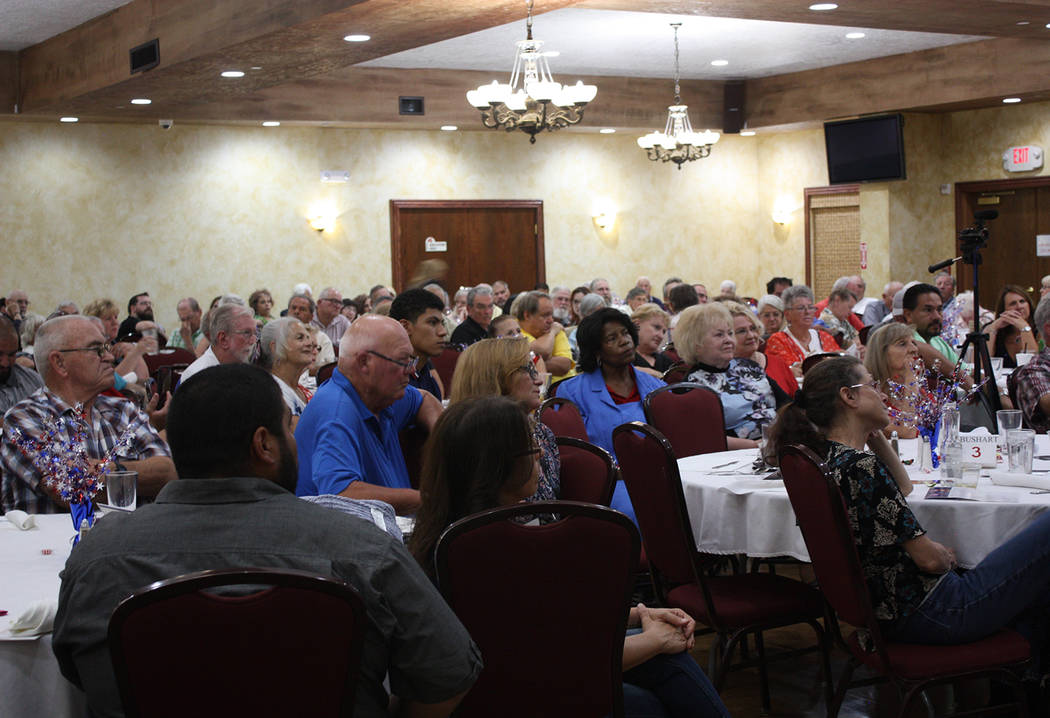 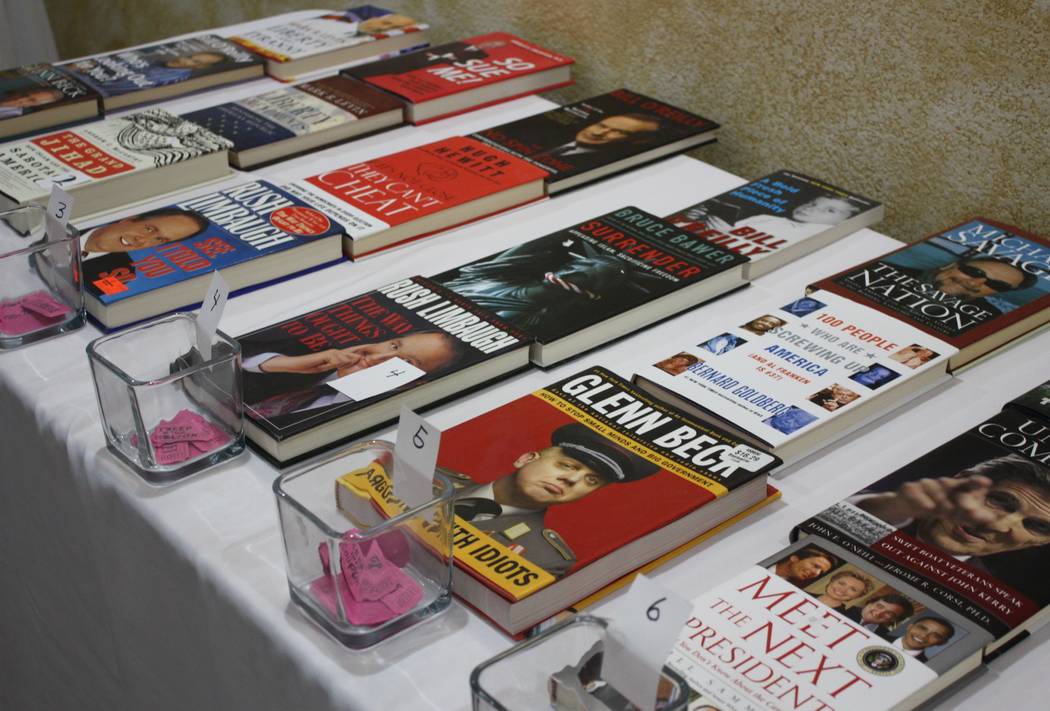 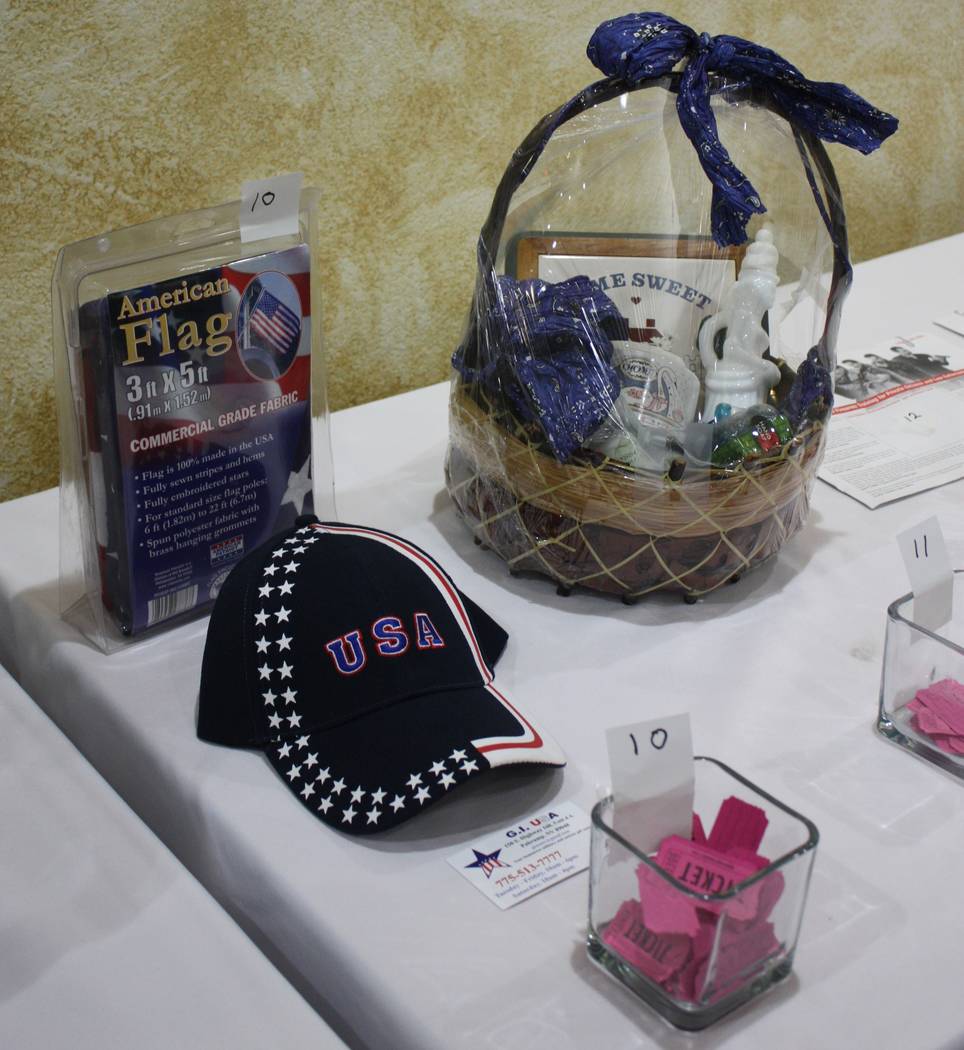 Robin Hebrock/Pahrump Valley Times American-themed items were a big draw for those hoping to snag a few of the many raffles prizes available.

Pahrump played host to an exciting evening for a large crowd of Nye County residents who had the opportunity to hear Nevada rancher and well-known conservative activist Cliven Bundy speak at the Independent American Party-sponsored “Constitution Dinner.”

Bundy’s story is familiar to many, with the 2014 Bunkerville standoff and all of the aftermath a topic of intense interest across the entire U.S.

“This was an event where citizens came to see a man, Cliven Bundy, who stood his ground for his rights against the overbearing and dishonest federal agency managing the peoples’ lands,” Nye County IAP Chairman Andy Alberti explained of the gathering July 20. “Cliven Bundy spoke about the U.S. Constitution and why reading it and understanding it is so important to our history and our perceived freedoms.

“The Cliven Bundy story is current history but the Sagebrush Rebellion in 1999, involving Nye County Commissioner Dick Carver, the Hages ranchers and even past sheriff Tony DeMeo, who responsibly acted in his position as a constitutional sheriff, was a prelude to current events.”

When Bundy took to the podium that evening, it was to a burst of rousing applause and obvious anticipation. Bundy spoke about the experience of the Bunkerville standoff and its many consequences, noting that though he and his family had been cleared of all charges, there were still others not so lucky. He touched on the situation of Todd Engel, who was sentenced to 14 years for his role in the Bundy standoff and Gregory Burleson, who received an even harsher sentence of 68 years for the same cause, describing the sentencing of the two as wickedness by the judicial system.

All was not negative, however, with Bundy noting, “But we did have a victory. The Hammonds came home!” The crowd responded with even louder cheering while Bundy continued, “That’s worth celebrating, isn’t that? It’s a great thing” He added that though the judicial system had failed in this case, President Donald Trump was to be thanked for stepping in and offering the pardon Bundy felt was required for the Hammonds.

Bundy fiercely declared that citizens must stay ever-vigilant to ensure their freedoms are protected and never hesitate to fight back when they feel their liberties are being oppressed or the federal government is overreaching itself. The U.S. Constitution, he asserted, was a document of extreme importance which should be treated much as the Bible is.

The purity of the Constitution, Bundy professed, was what the IAP was striving to represent and he said he was optimistic that the party would continue to gain ground and eventually make up a large pool of the voting population.

Jamie Bundy, daughter of Ryan and Angela Bundy, also spoke during the dinner, contributing her passion on the same issues. She too focused on the need to hold to the fundamentals and intent of the U.S. Constitution, as well as her belief that the country needs to move toward a more godly way of life. “Anyone or anything that attempts or forces another person to be deprived of their freedom and the right to choose is serving Satan,” Jamie proclaimed, continuing, “We need God in America again and we need to be able to find the courage to fight for freedom again because it is being taken away from us.”

After all was said and done, Alberti expressed his satisfaction with the event and his desire to see many more such activities in the future. “We were a bit overwhelmed getting everyone into the event, so many attended,” Alberti said following the successful dinner. “We were getting calls up to a few hours before starting time. The event was packed. We had many folks let us know how much they enjoyed the Constitutional Dinner. We need more of them.”

Alberti said one of his favorite moments of the night by far was the singing of the national anthem, which truly highlighted the purpose behind the evening’s event and the patriotism at the heart of all who were there. “The program opened as Lance Roy Schaus was to sing the national anthem acapella. When he faced the flag and began to sing I saw everyone stand and begin to sing with him, hands on hearts, ex-military saluting and not the typical mediocre singing,” Alberti enthused. “It was full-throated and wonderful to hear. It was an emotional moment. It was obvious that those who attended had a fervent love and belief in this country and what it stands for.”

Alberti offered thanks to all who attended or helped make the evening a success, remarking that there were several notable persons in attendance. These included several candidates in the upcoming election, current and former elected officials and well-known political activists from other prominent groups.