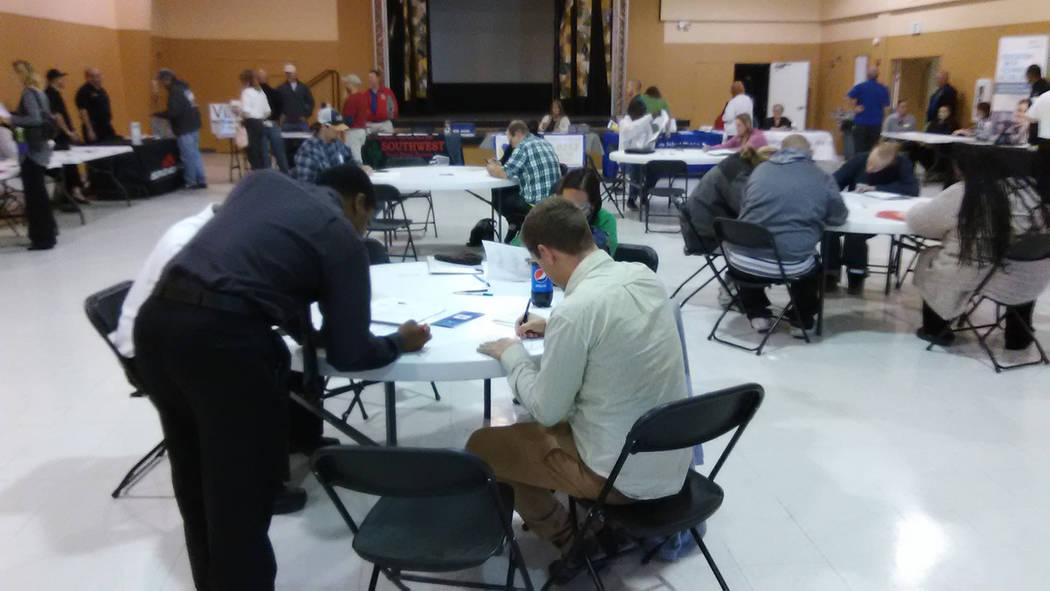 Selwyn Harris/Pahrump Valley Times More than 20-area agencies and businesses participated in NyE Community Coalition’s job fair on Friday Nov. 3. Officials said at least six individuals, seeking employment were hired on-the-spot during the event, while others awaited callbacks. The next coalition job fair is scheduled for February 9. from 9 a.m.-to-12 p.m. 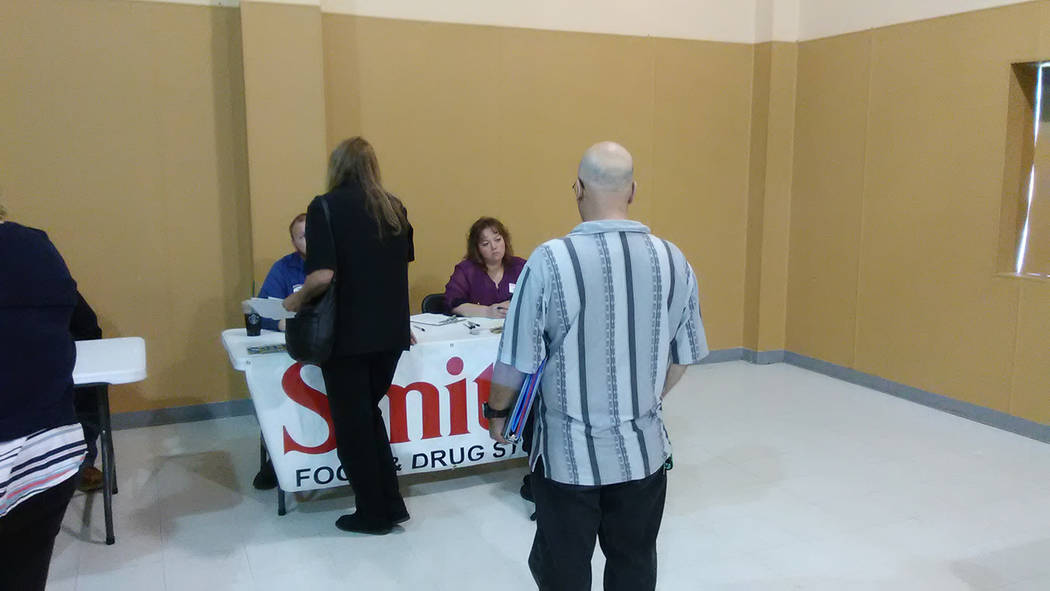 Selwyn Harris/Pahrump Valley Times Smith’s Food and Drug store was one of the many vendors on-hand for the quarterly coalition job fair earlier this month. NyE Communities Coalition officials said they received very positive responses from area businesses who participated in the popular coalition event.

With upward of 24 area agencies participating in the NyE Communities Coalition Job Fair, someone was bound to get hired on the spot Friday, Nov. 3.

In fact, coalition officials said the event surpassed their expectations as at least a half-dozen individuals who sought employment were actually hired on the spot, throughout the day.

The coalition hosted the event at its 1020 E. Wilson Road location from 9 a.m. until noon.

Tammi Odegard, workforce director for the coalition’s Career Connections branch, said the quarterly job fair turned out to be a very successful event this time around.

“We had about 65 job seekers who were there that day,” she said. “I do know of six people who were hired as a result of the job fair. In other words, roughly 10 percent of the applicants who showed up that day were able to secure employment, which I think is very good.

“Many other job applicants gained great experience by meeting potential employers, which is also a very valuable asset to take away from the job fair, because it’s not something that comes naturally to a lot of us, such as being able to make eye contact, and of course, dressing for the part.”

Odegard also said most, if not all, applicants arrived on time and were quite prepared to convey their respective experience and qualifications to the would-be employers on site.

She noted that many of the job seekers took advantage of some of the free services offered by the coalition long before the job fair arrived on campus.

“Every week we have an orientation to teach people about the coalition and about what our partners can provide for them.” she said. “We offer resume writing, and dressing for success classes every Wednesday at 10 a.m. On Fridays at 9 a.m., we offer the job readiness courses. Those classes are very popular and very well participated each week. I urge people who are seeking employment, and want to learn new skills, to take advantage of these services that we offer here at the coalition.”

Odegard also touted what’s known as the “Coalition’s Clothing Closet,” for those who feel their wardrobe may not be up to par for an actual job interview.

“Anyone can come by any time if they feel they may need clothing to wear for a job interview, or for a job itself,” she said. “We are open 8 a.m. to 5 p.m., Monday through Friday.”

Physical appearances aside, Odegard said the agency also provides the accoutrements to prepare for entering the workforce.

“We also have an area where people can use our computers for anything that is work-related, be it creating a resume, or anything else to meet their basic needs,” she said. “That comes with a printer, scanner, a fax machine, a copier and telephone. Again, that’s for anything that is work-related for area job seekers. If they need to get their birth certificate, obviously, that is related to employment and they can use our resources for that as well.”

Odegard is now encouraging those who are not familiar with the coalition’s Career Connections program and services, to visit the campus to learn more.

“Anyone can come to our orientations, which are at 9 a.m. each Wednesday,” she said. “We will share all the programs that we offer here as well as all of our partners’ programs. There may be something here that a job seeker needs in order to move forward. Also, when our partners gain new and additional programs, we can provide the most up-to-date information for job seekers. If someone attended the orientation a year ago, I would urge them to come back and try it again.”

Aside from those looking to get hired, Odegard said the employers who attended the job fair were equally enthusiastic about the event.

“I had a very positive response from all of the vendors on hand,” she recalled. “They made positive comments about the quality of applicants drastically improved over the years. I really think that is pretty much self-evident when you see at least six people getting hired right on the spot at the job fair. Overall, I thought the event was very successful and we are very thankful to all of the agencies and businesses who attended. For those job seekers who attended, but were unsuccessful in securing employment, my advice is to just keep trying and don’t give up.”

For additional information on the coalition’s employment services, call 775-537-2323.