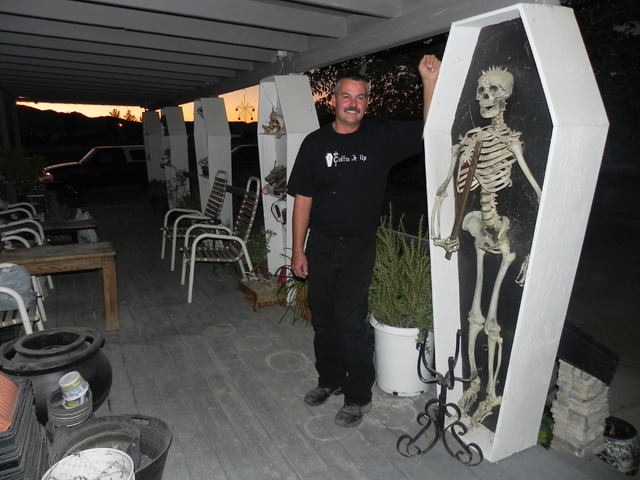 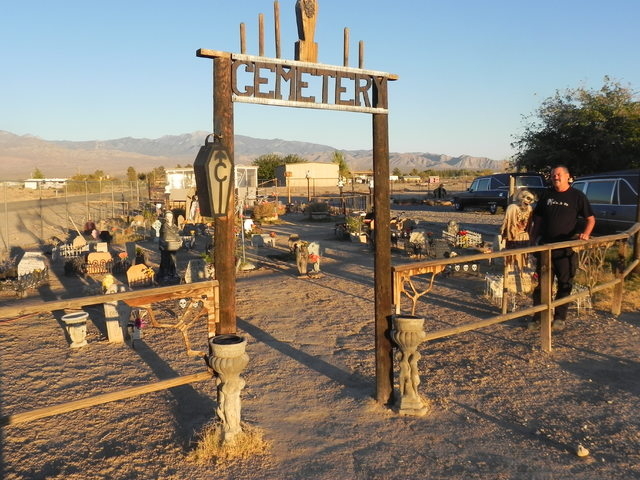 When drivers pass Bryan and Dusty Schoening’s home in northwest Pahrump this time of year, they may think the cemetery is only up for Halloween.

“Then they drive by in February and it’s still up,” Bryan Schoening said.

The cemetery includes a stand-up skeleton, a mannequin of a corpse in a coffin and numerous gravestones, including one for Pluto, a planet named after the god of the underworld.

“It’s not really a fascination with death, it’s more of a fascination of life and a celebration of life and everybody knows the best bird-watching always happens in the cemetery so why not have one in your front yard,” Bryan Schoening said. “And it’s kind of blossomed. There’s a lot of memorials, friends who passed away. So we put up headstones for them and then of course we’ve had quite a few pets that passed away, that’s why there’s an impromptu pet cemetery.

“People have donated actual headstones from where their loved ones are buried elsewhere,” Bryan Schoening said.

Those people can visit Schoening’s cemetery to pay respects to their lost, loved ones instead of traveling a long way to the actual cemetery.

The cemetery is an introduction to Schoening’s unusual business, Coffin It Up, which produces coffins for not just burials, but for furniture that function as bookcases, DVD cases, coffee tables, even jewelry. His home was featured on the Home and Garden Network’s show “Home, Strange Home.”

Coffin It Up has been a business since 2000. Bryan and Dusty Schoening moved to Pahrump from Oregon in 2002 and moved into their present home in 2005.

“People are dying for what I do,” he joked.

So how did he get into making coffins?

“It was actually our daughter, she had the idea for a Halloween party while she was in school that it would be cool to have a coffin to jump out of to scare people coming up to do the trick or treat. Being a long-time woodworker I figured out it can’t be that hard,” Schoening said. “I made her one and discovered it wasn’t that easy. There’s angles, they’re all different and it was a challenge and it was really that challenge that wrangled me into it. I started making more coffins, of course you can only have so many coffins laying around, then I started finding different ways to make them into.”

A casket is a full-sized box, a coffin is six-sided in the shape of a person, he said. In the Old West, cabiniet makers and wheelwrights typically make coffins.

“The other reason Coffin It up was started at Christmas time actually I lost my parents to an intoxicated driver and so I got a first-hand taste of how the funeral industry really can be and that’s when I became a minister. There was a lot of different things that happened because of that,” Schoening said.

He sells most of his coffins before people die so people can appreciate it before it’s put in the ground.

“I deal mainly with pre-need, I very rarely do something after the fact,” Schoening said. “They just want to be prepared. They don’t really want to have a pain for the problem for their family to take care of. They want their family to be able to go through the mourning process without having to go to deal with the car salesmanship of funeral homes.”

The prices are based on what type of wood is needed and the religion. Some religions won’t want any metal, he said.

Asked what was his most unusual burial coffin creation, Bryan Schoening said, “the ones that got mounted into the RV were pretty interesting. They were travelers and they wanted coffins built into their RV.”

For pine coffins, a regular lumber yard will work fine for material. But for some caskets he needs material like solid mahogany, zebra wood, blood wood, in one case he had to acquire wood shipped in from Africa for an eyeglass case, he said.

The orders come in from as far away as New York.

“The thing I tell people to do is you know go to Vegas, have a vacation, but only buy a one-way ticket. Come out here, rent a van, pick it up, drive it home and a lot of people do that,” Bryan Schoening said. “We’re doing a pre-need, they’re turning it into a vacation and a fun thing.”

His home is Pahrump’s only entry in the Weird Las Vegas and Nevada book. The publicity has led to some people who want tours of their home.

Dusty Schoening said Pahrump tourist officials don’t want to acknowledge they’re here. But she said, “if they knew how many people came to Pahrump just to come here, their minds would be blown.”

In his living room, behind the sofa, Bryan Schoening added latex to make teaching skeletons into artificial corpses with nicknames like Zen, Tinkerdead and Evo Screamo. Even his bathroom has tile in the shape of coffins.

Adding to the macabre atmosphere, the Schoenings accumulated 11 hearses, mostly broken-down ones in the back yard, a few are parked in the front driveway, one has the license plate “Doom.”

The Schoenings have also been featured on the Learning Channel for their newer venture, Church of the Coffin.

“We were on TLC for Wild Weddings for a wedding we did at the Lee Funeral Home, we actually did a wedding for a bunch of vampires,” Dusty Schoening said.

When they began the wedding business, they were told Bryan had to be affiliated with a church, Dusty Schoening said. After several months, they acquired a certificate in 2006 from the county clerk to conduct marriages. Since they don’t have a chapel they conduct the ceremonies at various locations, at Lakeside Casino, Pahrump Valley Winery, even two pizza parlors. Dusty Schoening said some couples choose to tie the knot in the cave constructed behind their house of polyurethane foam or the graveyard, even their living room.

Bryan Schoening said he didn’t like Christmas because of the memories of his parents’ death, but now he decorates the cemetery with LED lights that are timed to go off in time with music.

The Schoenings are not finished with their plans.

“The hope is, because we actually own the vacant lot next to us, also actually in time I want to build the coffin house, which is going to be fully coffin shaped,” Bryan Schoening said. “I hope to get in the ‘Guinness Book of World Records’ for having the largest coffin in the world.

The couple do not find it depressing waking up to the fake corpses, skulls, caskets and reminders of death every day.

“It’s always great,” her husband said. “I love waking up and seeing all the great stuff around that I built, painted, carved, done this, done that.”