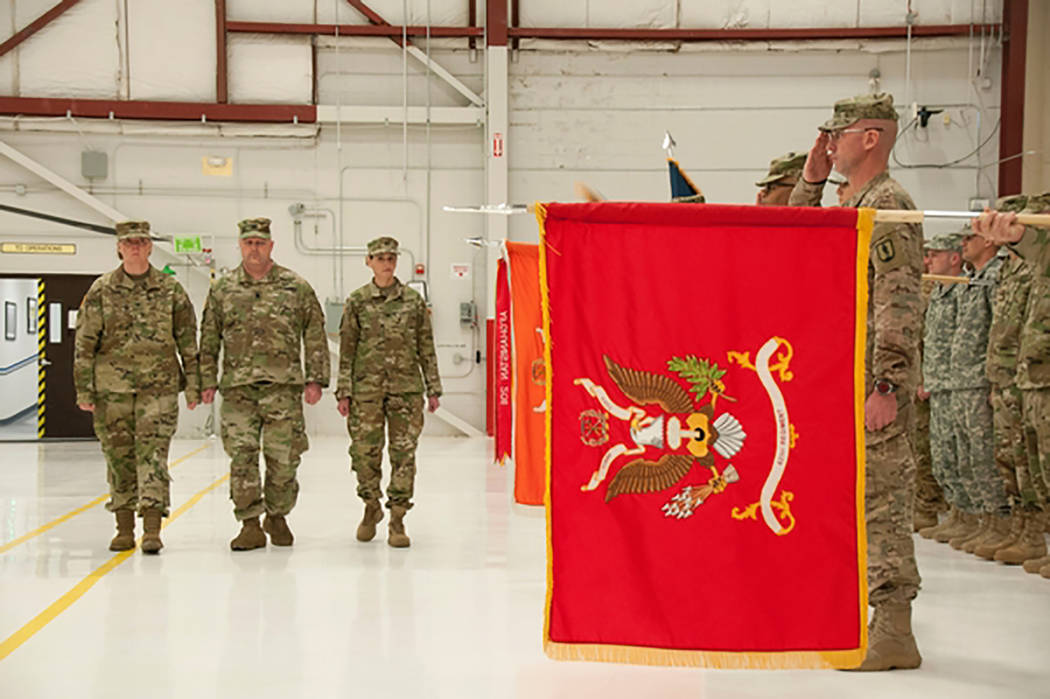 Occurring at the start of this year’s Women’s History Month, the significance of a recent Nevada Army Guard change-of-command ceremony didn’t go unnoticed.

Women’s History Month is annually celebrated in March in the United States; the celebration recognizes the contributions of women to history, culture and society.

“I did mention it during the ceremony to (Col.) Joanne (Farris),” said Col. Mary Devine, the new commander of the 991st. “When we enlisted at the beginning of our careers, women were less than 8 percent of the force, so you didn’t see a lot of female soldiers. We’ve just about doubled that percentage during our careers, so quite a few changes have occurred.”

Devine now commands one of the two brigades in the Nevada Army Guard.

The brigade oversees the state’s Army aviation assets, the Regional Training Institute, the 422nd Expeditionary Signal Battalion and — as a result of Army Guard reorganization this year — the 1st Squadron, 221st Cavalry.

“Being the first female brigade commander, I thought it was historical I would pass the command flag to another woman in the month of March — or, as we call it, ‘Women’s History Month,’” said Farris, who is now the deputy to the commander of the Nevada Army Guard. “There is significance to that.”

Devine, of Reno, never imagined a brigade command was in her future when she enlisted in the Montana National Guard in 1988 — but not necessarily because of her gender.

“I didn’t think I’d be here, primarily because my mom died a week before my 13th birthday,” she said. “I was pregnant by the time I was 18. I was divorced by the time I was 23. I put myself through college. There were a lot of hoops and hurdles along the way before I got on the path that I am on right now.

“Did I always know I’d do something? Yes, I always had a goal and a vision, but it wasn’t until I was a captain that I knew this is what I wanted to do, this is where I’m headed.”

Devine is married to Mark and she has four children ages 18-33. She works full time as the director of operations at the United States Property and Fiscal Office in Carson City.

Devine said she is eager to begin her new position with the 991st, an extremely mission-diverse brigade with a wide variety of assignments.

So far, Devine has emphasized the importance of “development, readiness and training” when she meets with the commanders of each of the brigade’s respective units.

Commenting on the recent addition of the 1-221st into the brigade, Devine said the brigade will prioritize assisting the squadron with its administrative workload as the squadron finalizes its transition into the 116th Cavalry Brigade Combat Team headquartered in Idaho.

Because of its new association with the 116th, the 1-221st is expanding from about 420 soldiers to more than 650 soldiers and the squadron is receiving more than $250 million worth of new armored vehicles, including 45 Bradley M2A3 Fighting Vehicles and 14 MIAI AIM-SA tanks, to equip itself for its new mission.

Devine will work with Adjutant General Brig. Gen. William Burks and Brig. Gen. Michael Hanifan, the commander of the Nevada Army Guard, to emphasize the fact combat-occupation opportunities are available in the Army Guard, including the cavalry squadron.

“We want to make sure they (female soldiers) understand that it is available to them (to be tankers),” Devine said. “It’s important to make sure our force knows this is an option and training seats are available.”

When asked what she would say to a young female private struggling in the male-dominated military, Devine said, “Always be yourself.”

“I would tell that private to be yourself and believe in yourself,” she said. “Be as professional and competent as you can and take it one day at a time. If you do that consistently and routinely, you’ll be just fine.

“Problems arise when you compare your weaknesses to someone else’s strengths. If you make sure to be yourself, everything can work out.”