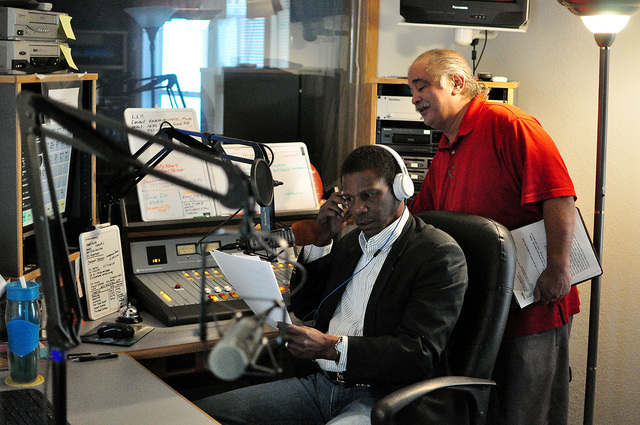 The Pahrump Valley Times has launched a partnership with KNYE Radio to produce a daily newscast for the radio station and raise the profile of the newspaper.

KNYE owner Karen Jackson approached the newspaper in October about the potential newscast, which runs Monday through Friday at 5 p.m.

“I used to broadcast an audio newsfeed but stopped several years ago,” Jackson said. “It wasn’t local news important to the community.”

The idea was brought to Jackson during the summer by Rodney Camacho, owner of the video and audio production company Valley Productions. The pair immediately thought of Times reporter Selwyn Harris, a newscaster for a local television station for nearly four years.

“After Karen and I decided the news was a go, we needed someone used to being recorded,” Camacho said. “Selwyn was the obvious choice. He has the voice we needed.”

Jackson and Camacho requested a meeting with Times publisher Marie Wujek and editor Arnold M. Knightly to pitch the idea. All agreed the collaboration would be good for the community, and raise the profile of both businesses.

“Marie and I thought it was an excellent idea to give listeners accurate news reports while enhancing the profile of the newspaper throughout the Pahrump area,” Knightly said.

“I’m excited. The PVT publishes Wednesday and Friday,” Jackson said. “The newscast gives the public their local news faster. It’s all about bringing something to the community.”

But the newscast is not a straight read of the newspaper, but synopsis of stories listeners can follow up on by reading the full story in the Times.

Camacho said most of the taping is done in his home studio. He spends time researching the news and scripting it for Harris to read.

“I start with local news and then move to the countywide items,” said Camacho, who develops the script. “State news is last on the agenda and we only use it if we need to fill time.”

Camacho said there was editing to be done after Harris reads the news and he has to have a final copy to KNYE early in the afternoon for the 5 p.m. broadcast.

But is is not just Harris carrying the full load of the copy reads. Linda Kass, founder of the High Deserts Shorts International Film Festival, may be taking Harris’ place on Thursday although as of Monday afternoon Kass said, “It hasn’t been confirmed.”

Kass said she would be doing a special segment every Friday, regardless of her part in reading the news called, “Going the Distance.”

“I’m thrilled to be granted airtime to cover events and organizations that are particularly community oriented and their efforts should be recognized,” Kass said.

She will highlight events in the community like the Nevada Silver Tappers Christmas Show on Dec. 13, and the Rotarian’s Christmas party and its part in the Angel Tree event, where members of the community can take a name and make it a good Christmas for less fortunate children.

“I’ll highlight any event that benefits the community.”

Harris, whose main focus is still on the Times, said he is excited about the new partnership.

“Myself, Rodney Camacho and Linda Kass are looking forward to this brand new endeavor,” Harris said. “Providing accurate and up-to-date local news is very important to our rural community, especially at this point in time of unprecedented change here in Nye County and Pahrump.”

Harris said the partnership will bring accurate information to listeners, not heresay and rumor.

“We believe, the combination of Valley Productions, KNYE radio and the Pahrump Valley Times, truly has the resources to give listeners the information they not only want, but need,” Harris said. “Accurate information is worth its weight in gold.”

Jackson said if any businesses are interested in advertising with the newscast to call her at the station.