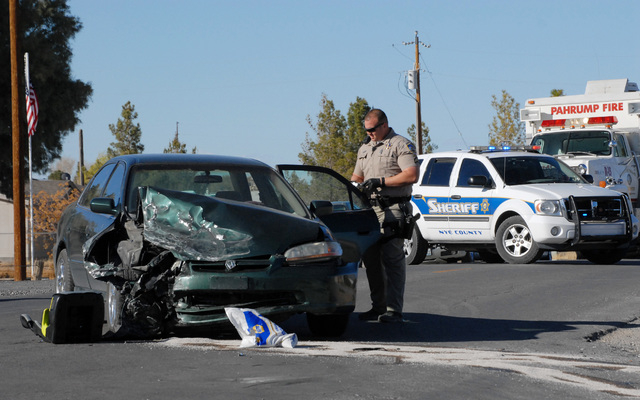 Four people were transported to the local hospital Thursday afternoon following a three-vehicle accident at the intersection of Vicki Ann Road and Bridger Street.

Pahrump Valley Fire Rescue Services and Nye County Sheriff’s deputies were dispatched to the scene of the accident just after 3 p.m. When they arrived, one of the vehicles, a green sedan, was in the middle of Vicki Ann Road, another, a white SUV, was pushed back into a ditch at the corner of the intersection and a yellow golf cart was parked just behind that.

An infant’s car seat was also sitting in the street in front of the green vehicle. A sheriff’s deputy on scene confirmed a baby traveling in the vehicle appeared to be fine following the incident.

A portion of Vicki Ann Road was blocked off by police patrol and auxiliary vehicles as medics assessed the injured parties and deputies conducted an investigation.

Following their assessment, four people were placed on gurneys and placed into two waiting PVFRS ambulances to be transported to Desert View Hospital for further medical care.

The intersection remained closed for more than an hour following the incident.