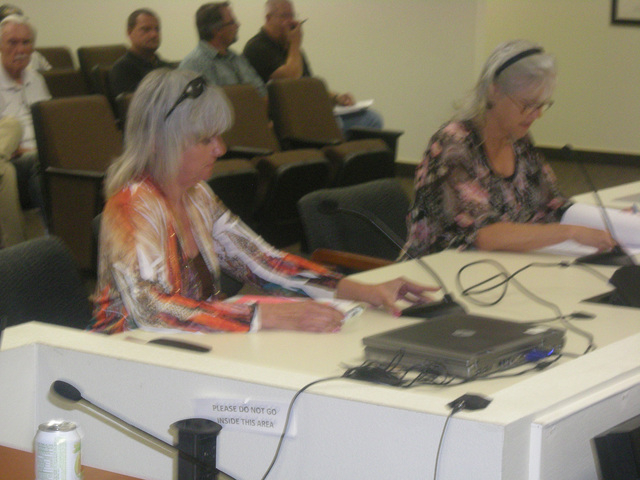 County commissioners Tuesday approved a bill reducing the fee for initial applications for a medical marijuana dispensary from $30,000 to $15,000, after a last-ditch attempt by Commissioner Frank Carbone to lower the fees even farther to $4,000.

Fellow commissioners were unaware of Carbone’s plan, which also reduced the renewal fee for a dispensary from $7,500 to $1,000. His motion failed to get a second.

“My point is just that the end users are going to feel the pain,” Carbone said.

The license fees will be kept by the county treasurer for the sole use and benefit of the county to be paid out under the direction of the Board of County Commissioners in the same manner as other general fund disbursements.

Commissioner Dan Schinhofen stepped down from his chairman position to make the motion to amend the bill to keep the license fees in the latest bill intact but only require a 2-percent tax on marijuana produced or sold instead of a 10-percent tax. Medical marijuana establishments must present a report to commissioners on the 25th of each month on the quantity produced and sold. At the first board meeting each fiscal year, the planning director will present a list of applicants up for renewal to county commissioners.

“We’re well below what everybody else charges in this state. This is really a fair amount in that respect and taking that 10 percent down to 2 percent is really a good move because the state doesn’t charge more than that,” Schinhofen said.

His motion passed 4-1. Commissioner Butch Borasky, who is opposed to medical marijuana, cast the sole vote against.

Nye County Planning Director Darrell Lacy said the county manager preferred to have the planning department responsible for the applications rather than the sheriff’s department.

“This county licensing will not be done until after the SUP (special use permits) are granted by the county of Nye and the state has done their provisional medical marijuana certificates,” Lacy said. He said there was a desire to get the county licensing provisions in place in parallel with the state to speed up the process.

Laura Oslund, executive director of the NyE Communities Coalition, a foe of medical marijuana, continued unsuccessfully to press for money to be allocated for treatment.

“There are going to be consequences for bringing marijuana into our community,” Oslund said. “I want you to consider that the traffic fatalities have increased and not with recreational, just with the medical marijuana, just by opening a dispensary by 114 percent, by those testing positive for marijuana in Colorado.”

Commissioner Donna Cox didn’t want to reduce licensing fees any lower, to have money to deal with any potential problems down the road like those Oslund mentioned.

“I don’t want the end user to pay a fortune to get something they really and sincerely think is going to help them, although I have some doubts about that. That’s my own personal opinion. The bottom line, if we lower, is that really going to help the patient or is that going to put more money in the pockets of the people with the dispensary?” Cox asked.

Under the bill, applicants must file with the planning department the names and addresses of everyone having a business interest; specify the location of the premises and the property owner; include a copy of the special use permit granted by the county commission and a copy of the provisional certificate from the Nevada Division of Public Health and attest each owner, officer and board member has not been convicted of felony offenses specified under state law.

People who have been convicted of crimes involving moral turpitude, unlawful possession or sale of a controlled substance, sexual abuse or assault, or crimes of violence are prohibited from receiving a license. A special meeting has been scheduled for July 16, a day after the regular county commission meeting, to hear applicants for medical marijuana licenses.

The board may deny an existing medical marijuana license when in their judgment granting it would create or constitute a public nuisance; if it would result in maintaining a disorderly house; if it would seriously affect adjoining property values; the applicant isn’t a fit and proper person to operate the business and if there are ample and sufficient licenses and establishments in that area.

People who violate the chapter are guilty of a misdemeanor and a fine of $500 to $1,000 or up to six months in jail or both along with revocation of the license.

County Commissioner Lorinda Wichman remarked about conditions for denial of a license, which include persons who do not possess or do not have a reputation for possessing a good moral character.

“I just want to know who gets to decide on good moral character. I don’t believe you can legislate morality,” she said.