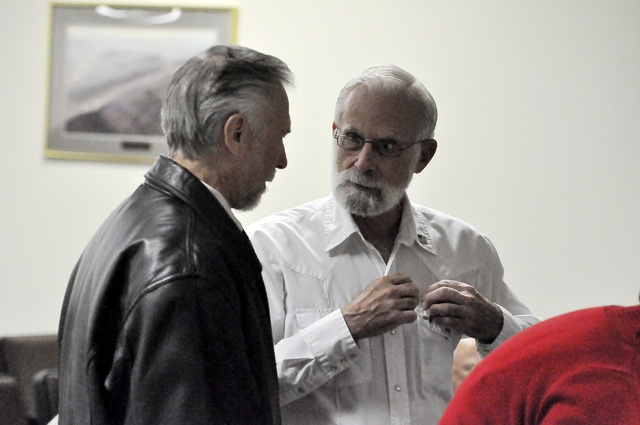 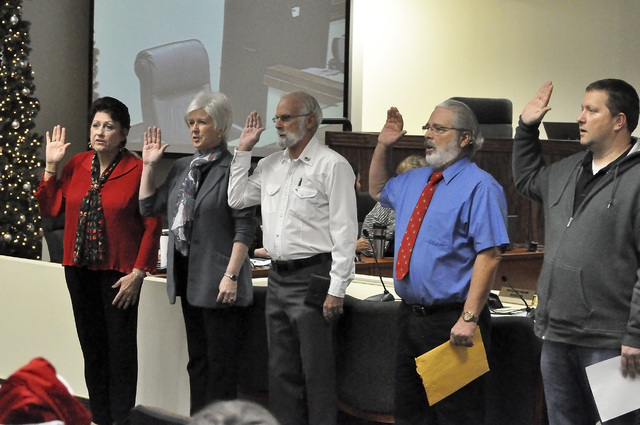 Nye County Commission Chairman Frank Carbone is leaving his seat after one term but still plans to be active in the county.

After four years on the commission, Carbone opted not to seek re-election.

At the Nye County Commission meeting on Tuesday, Carbone received several accolades, among them the Act of Kindness award from his fellow commissioners.

He said commissioners need to look at the need of the people “that elected them to office first and then the county.”

John Koenig, the former Pahrump Regional Planning Commission chairman, emerged as a winner in the race for the county’s second district in the General Election in November.

During his term, Carbone worked with veterans on helping to get benefits and bringing new businesses to Nye County.

“You can make a list of things you would like to pursue, that’s a good starting point, but along comes something else that you have to work on, and that cycle repeats itself time and time again,” Carbone said.

Carbone said it is important to keep an open mind and be willing to work with others.

“Plus, you need to work with staff,” he said. “That could be planning, public works, the DA’s office, the sheriff’s office and other commissioners as a board to accomplish your goal. This is a team effort. One person can not do it without the team; that also includes the people in and outside the county.”

“We need to look for private money to buy government-held land and open it up to oil exploration. We need to hunt down big companies and offer them a plan to help bring them good labor at reasonable wages,” he said.

He attended South Bay College of Business as well as El Camino College. During his 30-year tenure with Northrop Grumman, an aerospace and defense technology company, he worked on program management for the B-2 Stealth Bomber.

“I worked and managed program scheduling and program planning as well as managed industrial engineering. My last duty station was to help set up the Special Project Office for the Total Systems Support Program in Oklahoma at Tinker AFB as the integrated program manager, which earned us the David Packard Excellence in Acquisition award in 2004.”

Carbone said he plans to be on an ad-hoc committee for planning and for solid waste after the end of his term.

“Will I miss working in the county? That’s a big yes but, I have older family that I need to attend to,” Carbone said about his departure.

Koenig will take office on Jan. 3. He was sworn in Dec. 20, along with election winners commissioners Lorinda Wichman, Donna Cox and Nye County School Board trustees Lawrence Small and Mark Hansen.

Carbone thanked Nye County for its support during his four years on the county commission.

“I have met lots of good folks during my time as a commissioner. I wish good luck to John Koenig and to all the commissioners, as well as all the new appointees.”

Carbone’s last meeting will be on Dec. 28, a teleconference to discuss the annual audit of the county and Pahrump town budgets.