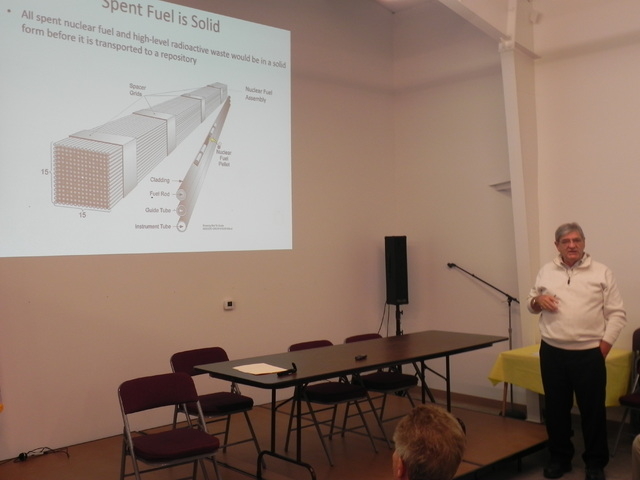 “It is our expectation that the Department of Energy will now comply with existing law and court rulings and restart the Yucca Mountain licensing review,” Schinhofen wrote in an Oct. 17 letter to U.S. Energy Secretary Ernest Moniz. “We believe Yucca Mountain is the most reasonable and prudent means to address the permanent disposal of the nation’s used nuclear fuel and defense high-level waste.”

He charged the previous decision to withdraw the license application was politically motivated and counter to the provisions of the amended Nuclear Waste Policy Act of 1987, which designated Yucca Mountain as the geologic repository for 77,000 tons of high-level nuclear waste.

Schinhofen’s letter states Nye County has specific oversight responsibilities as part of the Nuclear Waste Policy Act, including participation as one of the affected units of local government surrounding the repository site and as the recipient of Payment Equal to Taxes for being the host county. Nye County signed a series of five-year settlement agreements with the Department of Energy that generated at its peak $11.25 million in 2007 for the property value of the project. The county also received up to $2.7 million annually in oversight money to hire consultants to conduct independent reviews of the Yucca Mountain project.

“Nye County requests that the Department of Energy provide additional funding to comply with the aforementioned provisions of the Nuclear Waste Policy Act, as amended, and utilize existing carryover funding to restart the Yucca Mountain licensing process until such time as Congress appropriates additional funds,” Schinhofen wrote.

The Nuclear Regulatory Commission released a staff analysis of a plan that the Department of Energy submitted for a license in 2008 but later disavowed. The 781-page document concluded the site 100 miles northwest of Las Vegas “with reasonable expectation” could satisfy licensing rules.

The report immediately was seized by supportive lawmakers on Capitol Hill and executives in the nuclear industry as evidence the Yucca Mountain program all but dismantled by the Obama administration should be reassembled.

U.S. Sen. Lisa Murkowski, R-Alaska, said the NRC study shows the Nevada site is “a safe, worthwhile investment” that should be allowed to move forward. If Republicans capture control of the U.S. Senate in the mid-term elections next month, Murkowski would likely become chairman of the Senate Energy and Natural Resources Committee. Other Republicans have said that fresh votes on Yucca would be among the priorities in a GOP-controlled Congress.

Schinhofen made no secret he hopes U.S. Sen. Harry Reid, D-Nev., would be unseated as Senate Majority Leader after the November election. Schinhofen believes Reid has held up a vote on Yucca Mountain. He said 385 legislators voted for funding Yucca Mountain in the past, which shows it’s not just a Republican issue.

“Senator Reid still vows to kill it and all the jobs and he’s done a good job of that, 2,500 jobs were lost when funding was cut off,” Schinhofen said at a Tuesday county commission meeting. “NRC is supposed to be paying us in lieu of taxes. They’ve been ordered by the federal court to resume the licensing process since it was stopped illegally, so they basically conspired to break federal law.”

But Schinhofen said the full Nuclear Regulatory Commission is stacked 3-2 in favor of Reid.

“This was the real meat and potatoes because it was the post-closure analysis. It’s safe for 1 million years,” Nye County Nuclear Waste Repository Office Director Darrell Lacy said. He said the next step, finishing the licensing process, will take two to three years.

Nye County will be allowed to participate in that process, Lacy said, adding “the only way we can participate is if the feds provide funding.”

Voegele said the latest report, volume III, the post-closure report, said, “staff found hey, you did what you were supposed to do, you built an engineered barrier system that works with the natural barriers, satisfies the requirement for multiple barriers so that complies with the rule.”

The report concluded that this system of multiple barriers was not wholly contingent upon a single barrier. One barrier can fail and the system can still work at preventing the spread of radionucleids, Voegele said, during a presentation for National Nuclear Science Week at the Pahrump Valley Museum Wednesday night. Eight highly-respected, national laboratories worked on the project, he said.

In quoting from the report, Voegele said, “The engineered barrier system and the natural barrier work together so that the annual dose to the reasonably maximally exposed individual is below the post-closure individual protection standard during the first 10,000 years after performance closure and the period after the initial 10,000 years up to the period of geological stability. That’s the tricky part here is the rule doesn’t say it has to be 1 million years, it has to be up to the time of peak dose.”

“I wrote more Department of Energy positions about how stupid it was to go to a million years standard, not because you can’t do the calculation it’s because it defies comprehension,” he said.

The 77,000 tons that can legally be stored at Yucca Mountain was a projection of how much waste would be created in the 1970s, Voegele said, the total amount of nuclear waste from this generation of nuclear reactors and defense waste is now 130,000 tons, of which all would fit in Yucca Mountain, Voegele said. Nuclear power plants are storing 54,696 metric tons of high level nuclear waste in cooling ponds and 17,166 tons in dry cask storage after cooling the radioactive waste, he said.

Voegele said the mantra that Yucca Mountain was bad science stems back to President Obama’s 2007 presidential campaign, who tried to get Senator Reid’s political support. There was no money in the 2011 federal budget for the license review.

Voegele said when the license application was submitted to the NRC in September 2008, the review was supposed to be completed in three years. When the DOE said they would withdraw the license application, Aiken County, S.C., Washington state, and later Nye County, successfully filed a petition with the Atomic Safety and Licensing Board for a writ of mandamus in a Washington D.C. Court of Appeals which ruled the licensing process must continue.

“They told the NRC they had to go forward with the licensing process. You cannot stop it. You have to do it. They acknowledged it was Obama’s doing,” Voegele said. “The president cannot decline to follow a statutory mandate or prohibit it simply because of policy objections.”

Officials from the state of Nevada, which has fought against Yucca Mountain, challenged the safety evaluation report.

Robert Halstead, director of Nevada Agency for Nuclear Projects, said the NRC staff did not fully consider all the probabilities that could affect safety.

“It’s a pretty meek endorsement,” Halstead said. A review of the license application by state scientists and lawyers came up with 229 technical challenges, or contentions, that Nevada is prepared to pursue if the Yucca program moves forward.

Other aspects are still being dissected by the NRC staff, such as blueprints for an industrial operation that would be built on the mountain to receive and repackage waste for burial, and the quality assurance systems that were put in place to validate research. Those issues and others are expected to be discussed in other evaluation reports scheduled to be released before the end of the year.

The release of only a partial report “creates a false impression that the safety review has been completed,” Halstead said, and he suggested politics may be at play.

“It’s difficult to see what reason there could be for such a release except to provide political support and encouragement for Yucca Mountain supporters in Congress and elsewhere,” Halstead said.

Marvin Fertel, chief executive officer of the Nuclear Energy Institute, said release of the NRC staff study was a “key milestone.” NEI is the government affairs arm of the nuclear industry.

“This technical evaluation provides strong support for our belief that the Yucca Mountain site is appropriate for an underground repository for used nuclear fuel from commercial nuclear energy facilities and high-level radioactive waste from our nation’s defense program,” Fertel said in a statement.

Debate over the NRC report could be academic. The agency is running out of money in its nuclear waste fund since Obama withdrew support for the Nevada site after forming an alliance with Reid, its chief opponent.

“It is utterly useless to have wasted millions of dollars on this report,” Reid said Thursday.

Reid said taking the NRC staff conclusions at face value “is like reading one side of a lawsuit without hearing the opposing party’s evidence. The Energy Department will not pursue licensing Yucca and Nevada has persistently opposed the dump.”