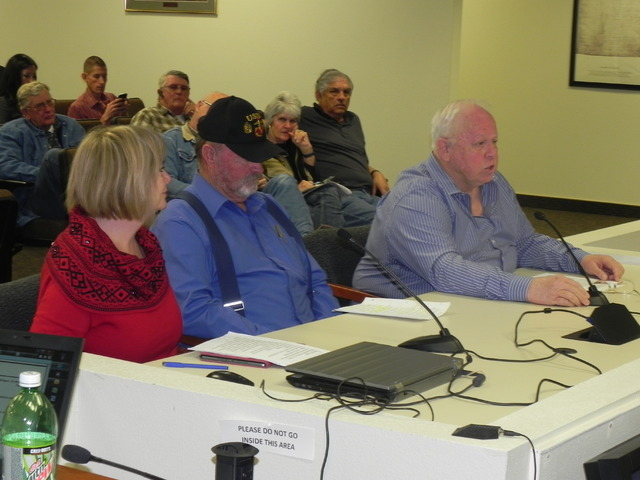 The commission voted 4-1 to overturn the Regional Planning Commission decision of Dec. 10 that denied the application of Desert Badger. The application failed at the planning commission with a vote of 5 – 2, though the county planning department recommended the amendment indicating that the proposed change conformed to the town’s adopted master plan.

Dan Scott, manager of applicant Desert Badger LLC, told commissioners that rezoning the two lots located at 7251 and 7370 East Thousandaire Blvd., would remove approximately 1,000 homes from the master plan inventory, which would in turn help address water conservation and shortage issues in the Pahrump Valley.

Scott said he intended to market the property for sale as a suitable location for development of a solar photovoltaic facility.

Planning Commissioner Chairman John Koenig told the county commissioners that the planning commission did not think the site was “the proper place for a solar facility.”

Nye County Commission Chairman Dan Schinhofen responded to Koenig that the public hearing was solely to change zoning districts, not to permit a specific type of industry.

The proposal elicited strong opposition from residents of Rogers Estates which neighbors the site.

Many residents, including Lloyd Hohl, Olga Martin, Penny Compton and Gary Thomas complained of threats to aesthetics and health risks associated with the construction of a solar facility. Hohl claimed that property values of homes surrounding a solar facility have proven to decline.

Thomas noted the proximity of the property to Rogers Estates, a mere 1,200 feet. “It will poison the entire area up there for future development,” he claimed.

Nye County Planning Director Darrell Lacy told commissioners that a solar photovoltaic facility is a preferred use and if it were constructed would have minimal visual impacts because the solar units are “low to the ground.”

Area realtor Marla Quercia urged the commission to deny the zoning change request stating that the solar panels would cause a detrimental reflective mirroring of the sun.

Schinhofen said that if a developer wanted to construct and operate a solar photovoltaic facility, a site development plan must be approved by the Regional Planning Commission and a conditional use permit obtained.

The measure passed with a vote of 4 – 1, with Commissioner Donna Cox voting against the proposal.

Schinhofen said that the development agreement between Nye County and PV Land Investments, LLC that encumbers the property, is set to expire in 2016.

That agreement proposes a 6,200-home housing development with Focus Property Group, approved by Nye County in 2006.

The commission also permitted the withdrawal of the acreage from the approved development agreement.

Scott said that 450 acres of the original 900-acre parcel in the original development site have new owners due to bankruptcy or foreclosure.