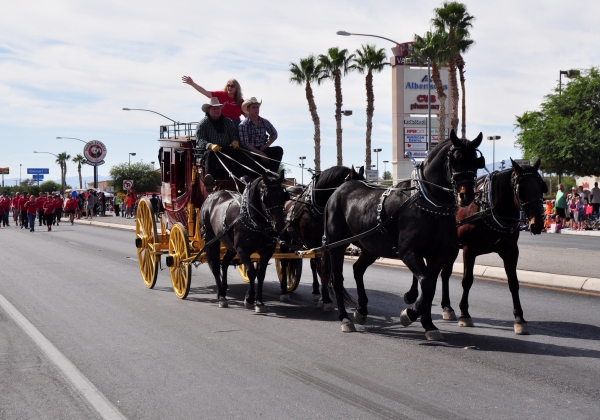 The Pahrump Tourism Committee is looking at ways to draw more visitors to town and utilizing data is at the top of their list of ideas.

In a study that is the first of its kind for the area, the tourism committee conducted a town-wide occupancy report for the first quarter of fiscal year 2016.

The study utilized key performance indicators and developed a trend report to be used for future tourism goals, as Arlette Ledbetter, tourism director for Pahrump, laid out the importance of visitors to the valley.

“Tourism equals economic development,” Ledbetter said at the county commission meeting Tuesday. “Improving the economic well-being of our community through the efforts that entail job creation, job retention, tax base enhancement and quality of life.”

To conduct this study, Ledbetter and the tourism committee collected data from hospitality stakeholders, which includes occupancy, average daily rate, number of visitors and visitor attraction attendance. More than a dozen stakeholders took part in the data collection process.

“This data is a tool to assess our baseline and to measure outreach,” Ledbetter said. “Measuring economic impact is common for tourism agencies and today we are introducing three new reports: town-wide occupancy, key performance indicators and trend reporting.”

The destination visitation report for the months of July, August and September showed that visitors in town generated tens of millions of dollars over that time.

Together those visitors generated an economic impact of $13.41 million over the three-month period from an estimated 84,056 visitors.

“Tourism is a powerful industry and the model works, as you will see today it infuses millions into our economy,” Ledbetter said.

There has been a push to increase visitors to Pahrump and since that initiative began, Ledbetter said she already sees improvement.

“I can definitively tell you in 2010 there was not as much tourism interest or activity in this town,” she said. “We have done a lot of work to build a stronger economy.”

The study showed that there were 314 hotel and motel rooms, 1,090 RV park spaces and 56 cabins available in town at any given time.

Aside from getting a grasp of the visitor and spending factors in town, the study will also allow for improvement in areas that need improvement in town.

“The goal of the project is to identify soft periods and develop strategic marketing campaigns to increase visitation,” Ledbetter said.

During July, August and September, town attractions brought in 40,379 visits. That time frame included the annual Fall Festival, which ran Sept. 24-27. The new Holiday Inn Express also opened at the end of September.

In addition to the destination visitation report, other data was collected as well, including advertising and website visits and how that brought media attention to town.

During the three months, the town of Pahrump’s website garnered 22,466 visits and the town’s Facebook page drew a total reach of 143,321. All those online factors resulted in 75 earned media stories, with an earned media public relations value of $270,856.

These ongoing findings will be presented to the county commission on a quarterly basis, which will allow the town to better track its tourism industry.