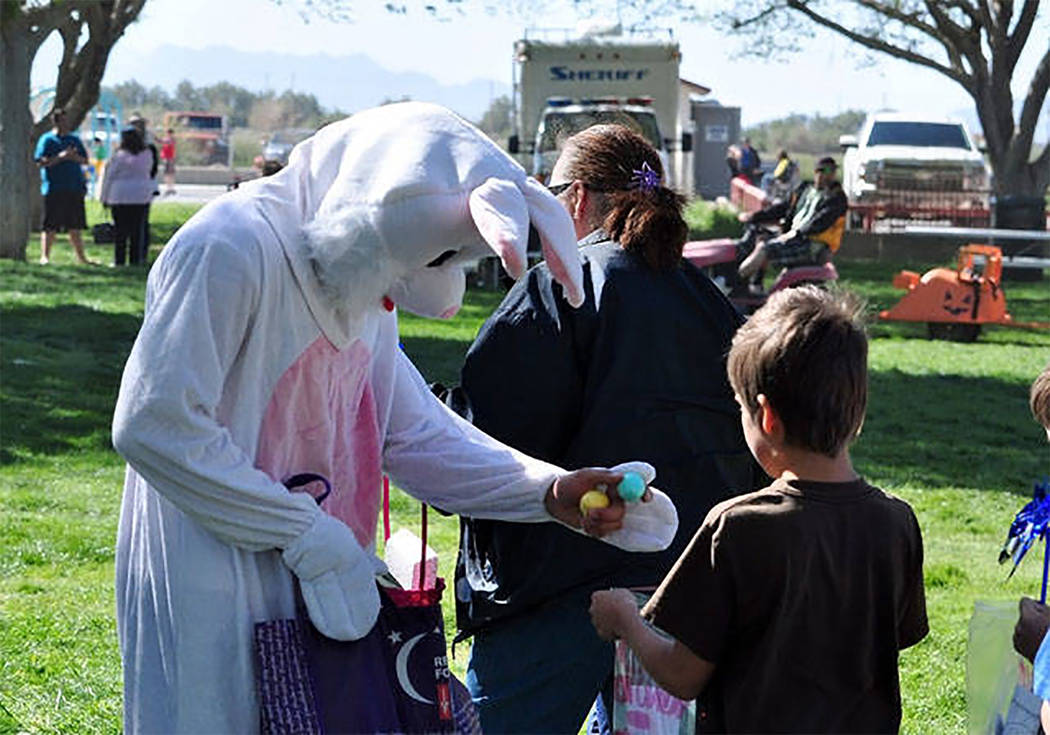 Selwyn Harris/Pahrump Valley Times The Easter Bunny will obviously play a big role during Saturday's free Community Easter Picnic at Petrack Park, as the happy hare will be on hand to visit with kids throughout the day from 10 a.m. to 2 p.m. The park is located at the intersection of Highway 160 and Basin Avenue.

“We have been doing this for more than 10 years, and we have a few things different this year,” Wright said. “We are going to have a ‘fun zone’ with games and all kinds of activities for the kids. The fun zone is our biggest change this year. We had bouncy houses prior to this year, but now we are going to go with the fun zone. They will be organized games this year, including sack races and other fun, picnic-style family-type games.”

As far as food is concerned, Wright noted that the event will provide something for everyone, including ice cream and kettle corn.

There will also be solar cooking demonstrations throughout the day.

“Everything including the hamburgers, hot dogs, chips, ice cream and cotton candy is free,” she said. “We’re also having a canned food drive, where if you bring canned food items, it goes to our local food pantries.”

Wright also said additional activities will include the popular “Egg Scramble” with the disclaimer, “A little different than an Easter egg hunt.”

“When the children drop by each booth, they will get an egg,” she said. “Instead of the traditional Easter egg hunt, it’s a little more organized where the eggs get passed out instead of being hunted for. We’ve got at least 25 vendors coming out and setting up. The Pahrump Disability Outreach (PDOP), which is also a sponsor, will run the children’s train. We will also have face painting for the kids and pictures with the Easter Bunny.”

One perennial favorite attraction scheduled to return this year Wright said, is the beloved petting zoo.

“RNG Farms will be out there with their cute cuddly creatures out there for the kids to check out, so it should be a very fun day,” she said. “Last year we had upward of 1,000 to 1,200 people come out and we’re anticipating roughly the same amount this year. We are funded mainly through donations from the community as well as businesses and organizations. That’s how we are able to host this event for the community. I really want to point out that donations and all of the volunteers make this whole event possible.”

Being a family-friendly event, Wright also noted that there will be no alcohol, tobacco or drugs allowed at the park on Saturday.