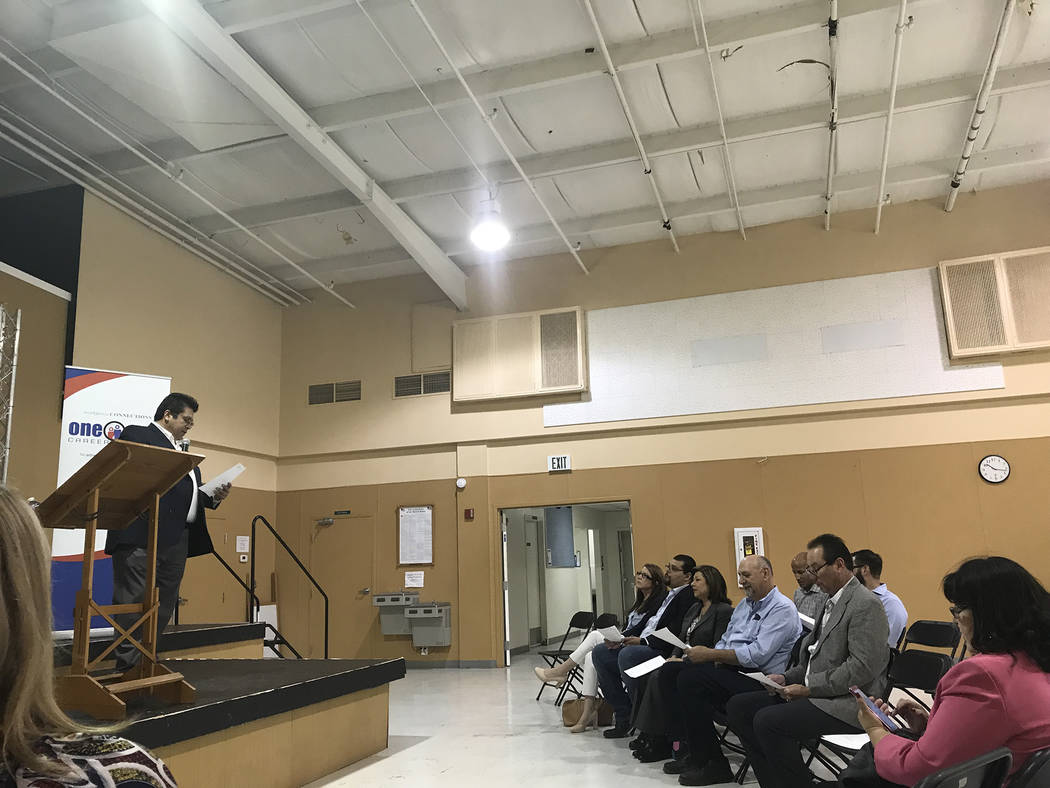 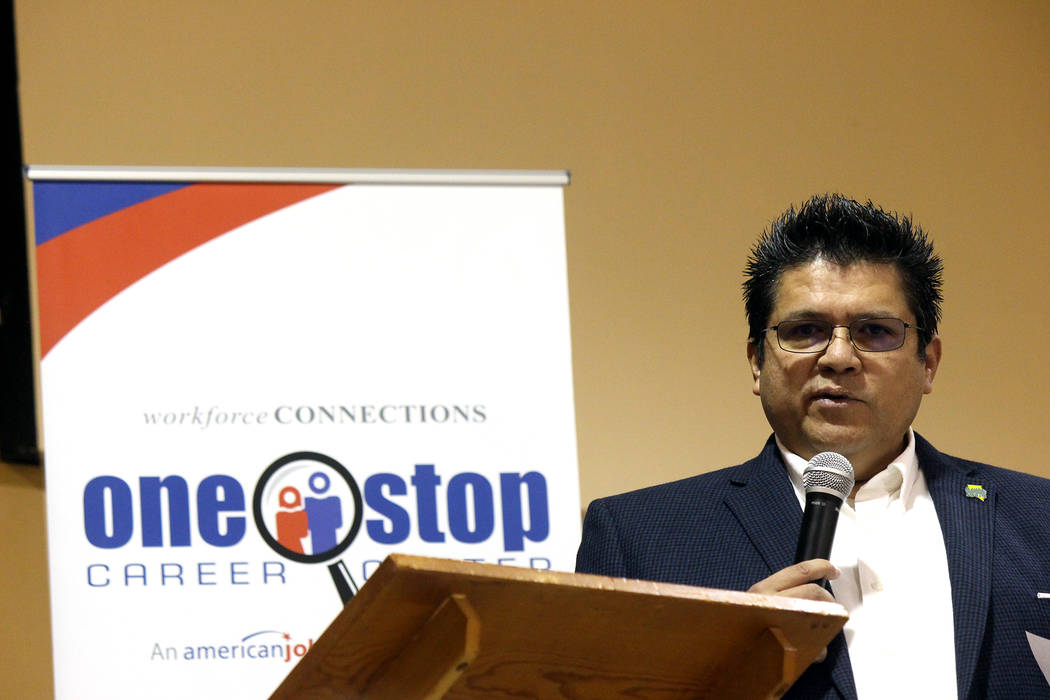 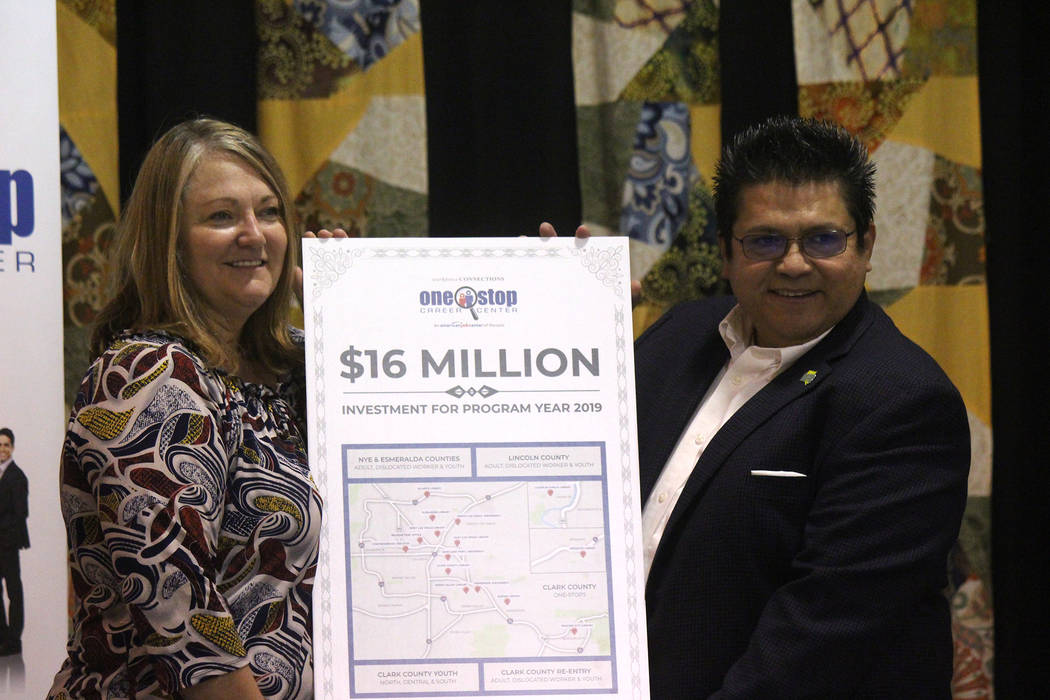 A presentation was made by the Workforce Connections (WC), Southern Nevada’s local workforce development board, and others, at the NyE Communities Coalition building to highlight millions in federal funding being put into Nye County and other parts of Southern Nevada employment and training programs.

Workforce Connections recently stopped in Pahrump to talk about the nearly $16 million investment of federal funds for a network of One-Stop Career Centers in Southern Nevada in the second half of July at the coalition building at 1020 E. Wilson Road during a community investment tour. The centers “offer vital no-cost education, training and employment opportunities to the public,” according to information in a news release from Workforce Connections.

Jaime Cruz, executive director at Workforce Connections, explained how the system works and the board’s connection to the coalition during a roughly 45-minute-long presentation, which included several speakers.

Cruz explained that Workforce is one of 550 boards across the nation.

“We’re called by the U.S. Department of Labor to convene this local one-stop system,” he said to a crowd that included local employers, elected officials and others.

The coalition has an office part of the one-stop delivery system at its Wilson Road campus and one in Tonopah.

“… Because of their (NyE Communities Coalition’s) understanding of this community and they’re so good at bringing different resources and different funding streams to this location, it is a true one-stop, and so our investment of Title 1 dollars help to fortify that collaboration,” Cruz said. “So this community investment means that people can come here to NyE Communities Coalition and either enter into a new career to take advantage of these employment and training resources offered, so they can advance their existing career or they can enter into a new career.”

Four counties, Nye, Esmeralda, Clark and Lincoln, are included in the $16 million investment. Nye County saw roughly over $1 million of that funding source, according to Cruz.

“I can’t stress how excellent and wonderful this program is,” Nye County Commissioner Leo Blundo said while speaking at the event. “It’s about workforce development and partnering with businesses, so it’s a public-private partnership.”

Blundo said during his presentation that, “These dollars are tremendously important here in Nye County for one specific reason here in Pahrump. It’s about that public-private partnership, and it allows the businesses to have access to federal monies and to be able to use the … programs to get people working, back to work and getting good jobs for these individuals.”

Blundo said, “I think it’s tremendously important to stress the fact that we have a lot of businesses in this community that are not yet aware of what the coalition does, and I think we need to stress and work on that outreach.”

An area employer also spoke about his success with the program during the presentation.

David Mayne, senior vice president of business and digital strategy at PIMedia, gave accolades to the program during his speech at the event. Pahrump-based PIMedia, a full digital agency, has been in Pahrump for over a year and moved here from Las Vegas.

The company had obtained three people from the program and retained one, according to Mayne, who spoke at the July event.

“Having the opportunity to take advantage of those programs and find the richness in the community that we needed, the coalition was just a huge help,” he said.

In all, “100 adults and 60 youths are enrolled in the program, but the number of people who come in here every day for assistance is about 60 people a day,” said Tammi Odegard, chief operating officer for NyE Communities Coalition, in a July interview.

The coalition doesn’t do job placement, but it does let people know about the opportunities.

“…Then we’ll help them apply—help them do their resumes, help prepare them for interviews, help them do job applications,” she said.

They help people 16 years of age and up.

The coalition has several offerings for job seekers.

“We have career coaches, so they really help them with helping them make decisions, get them on a time line, removing barriers,” Odegard said. “So if they can’t go to training because they don’t have fuel money to put in their car, we can help them with that.”

The coalition can also help with things like clothing.

“We do a lot of barrier removal,” Odegard said.

“Even though we only enroll 100 adults and 60 youths, you almost can’t count the number of people who just walk in and don’t get formally enrolled, but they receive all kinds of assistance,” she said.

Workforce is one of 30 funding streams the coalition receives, according to Odegard.

The Workforce funding stems from the Workforce Innovation and Opportunity Act, which was signed into law by former President Barack Obama in 2014. The legislation was “designed to strengthen and improve our nation’s public workforce system and help get Americans, including youth and those with significant barriers to employment, into high-quality jobs and careers and help employers hire and retain skilled workers,” according to the release from Workforce Connections.

Cruz said the official appropriation of funds should happen every five years, “But last time, it went 18 years without an official re-appropriation. The funds were officially appropriated in 2014, according to Cruz.

But appropriation isn’t necessary for the funding to come through.

“These are not what they call discretionary grants,” Cruz said in an interview. “They’re part of a formula funding, so it’s a part of what’s budgeted every year through the U.S. Department of Labor to keep America’s workforce competitive, so it’s not something that we have to wonder if it’s coming or not.”

More can be found about the Workforce Innovation and Opportunity Act at www.doleta.gov/wioa

The federal dollars under the Workforce Innovation and Opportunity Act “represent Title I Adult, dislocated worker and youth funding for the 2019 program year that began on July 1, 2019,” according to information from Workforce Connection’s release.

The recent funding was approved by Workforce Connection’s board and Local Elected Official Consortium in May at a joint meeting.

The NyE Communities Coalition’s Career Connections Center on 1020 E. Wilson Road is the access point for the program in Nye County.