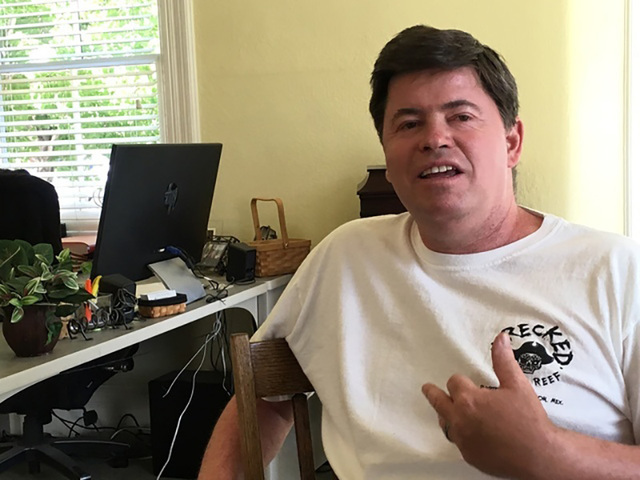 Registered agent Jed Block says that the state Department of Taxation wants him to spend $5,000 to mail out commerce tax information to his clients. The department is trying to sound optimistic in its information letter: "Welcome to Nevada Commerce Tax." Sean Whaley/Special to the Pahrump Valley Times

CARSON CITY — As the first installment of Nevada’s new and controversial commerce tax comes due Aug. 15, there are concerns and confusion about the effects of the new levy.

One of those with concerns is resident agent Jed Block, who operates his capital city business out of a historic home on Curry Street.

Block said the Department of Taxation had 3,000 informational notices about the new tax delivered to his office, apparently with the expectation that he would take the time and expense to mail them to his clients. There was no communication from the agency before the FedEx ground package arrived at his door.

Block estimated that it would cost him about $5,000 to do the tax agency’s work and that he cannot afford to do so at this time.

“It is just frustrating when taxation expects me to do its work,” he said. “I just don’t have the manpower or capability of doing it.”

He does not plan to forward the information letters to his clients and will tell the agency that in a letter.

Block himself will not have to pay the new tax, nor will more than 90 percent of Nevada’s other businesses. The tax is being imposed on businesses with more than $4 million in annual gross revenue and is projected to generate $60 million a year. The payment is for fiscal year 2016, which ended June 30.

But Block said the Tax Department wants him to pay for the effort to notify his clients. Other registered agents have received boxes of letters to be mailed out as well.

“I have a staff of two,” he said. “Postage alone is $1,395. But I have to go through the expense and effort for their supplemental information.”

The Nevada Taxpayers Association has sent a letter to its members citing a number of concerns as well.

“We have been working diligently with the Nevada Department of Taxation and other interested parties to help ensure that the process for filing is as transparent and easy to understand as possible,” said Anna Thornley, president of the group, in a Wednesday letter to its members.

“Despite our efforts, considerable confusion regarding the “Additional Information Form” that is required to be filed with the Commerce Tax Return remains unresolved,” she said.

Among the concerns are that it requires Social Security numbers, which the association says is unlawful because the agency does not have explicit authority to collect the information.

The agency disagrees with the association’s position on the issue.

Block said he is concerned that the collection of the Social Security numbers is a precursor to an information sharing deal with the IRS.

The Taxation Department was not immediately available to respond to the concerns raised Wednesday. But it has taken issue with whether Social Security numbers can be collected as part of the implementation of the new tax.

The letter also says the form also does not comply completely with changes that were approved by the Nevada Tax Commission at its June 27 meeting.

“As we work to ensure the greatest level of transparency for the taxpayer, we wanted to make you aware of our concerns and ensure you that we will continue to work with the department to get these issues resolved as quickly as possible,” Thornley said. “In the meantime, we urge you to use caution when completing and filing the Additional Information Form.”

The commerce tax was part of a $1.5 billion revenue package pushed by Gov. Brian Sandoval and approved by the 2015 Legislature to fund the state budget and the governor’s education agenda.

An effort to get the measure to voters in the November 8 general election for possible repeal ended in failure.

“I believe this is another unfair burden which is a ripple effect of Gov. Sandoval’s legacy,” Block said.