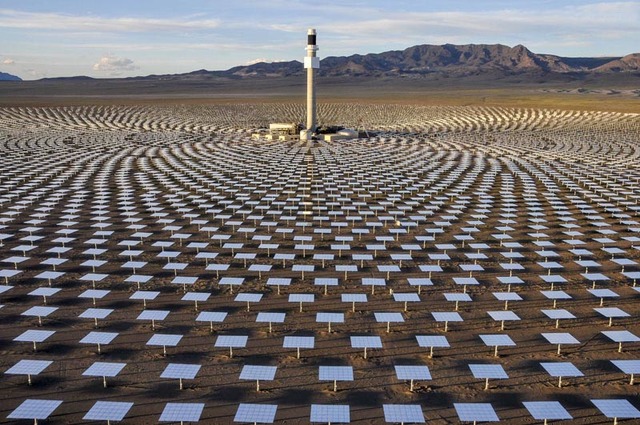 Special to the Pahrump Valley Times Crescent Dunes Solar Energy Project 15 miles northwest of Tonopah has an avian and bat protection plan in place which reduces the potential for bird deaths, and requires the company to report and isolate mortality events. The information supplied by a wildlife biologist contracted by Crescent Dunes who performs the monitoring of the project site indicated that there were 64 avian mortalities near the plant from January through August of 2007, Hendrix said.

With eight to 10 new solar towers coming to the Tonopah area as part of the Sandstone project, some are voicing concerns about potential environmental risks, but SolarReserve, who plans to build the project, is assuring that the location is “ideal” for the project.

Grikas said that the location near the Crescent Dunes Solar Energy Project is “ideal” for SolarReserve’s technology. As an example, she said the elevation of the site makes the land “unfavorable” for protected species such as the desert tortoise.

Grikas called the Crescent Dunes facility one of the “safest forms of electricity generation,” especially for avian safety.

“This has been confirmed by several different teams of on-site independent environmental consultants, who report their findings directly to the U.S. Bureau of Land Management, U.S. Fish and Wildlife Service, and Nevada Department of Wildlife,” Grikas said.

A look at concerns

Meanwhile, Basin and Range Watch, a Beatty-based nonprofit that advocates for conservation of the deserts of Nevada and California, has a pending Freedom of Information Act request for more details about the Sandstone project.

Kevin Emmerich, a co-founder of the nonprofit, said its main concern is a ten-fold increase of solar energy in the area.

“They have developed a way to prevent bird kills in stand-by (status), but not in the operational phase of the project,” Emmerich said. “Their biologists have told us that scavengers probably get in and find the dead or injured birds before they do.”

Bradford Hardenbrook, the supervisory habitat biologist at the southern region of the Nevada Department of Wildlife, said environmental challenges typically arise with new applied technologies such as thermal energy generation.

“Should all eight towers and all 20,000 surface acres become disturbed by the solar project, then the existing land base has been reduced by 20,000 surface acres, reducing the availability of existing habitats to resident and migratory wildlife, but also reducing available space for existing land uses like livestock grazing, recreation, and potentially direct access to other areas,” Hardenbrook said.

The exact estimates of Sandstone’s impact on the environment are not yet clear as details of the project are still unavailable, Hardenbrook said.

“Local environmental effects would be taken into account, especially for special status species or those of conservation priority,” Hardenbrook said.

“Concerning birds, impact context to species and populations involved could be weighed along with their additive nature with considerations like the impacts to migratory birds killed annually by domestic cats, numbers of bird collisions with roadway and aviation activities, transmission lines, buildings, and other infrastructure.”

Since the Crescent Dunes Solar Energy Project went into operation, the land base on which it sits was converted to a renewable energy generation facility, impacting available habitats for wildlife, Hardenbrook said.

The information supplied by a wildlife biologist contracted by Crescent Dunes, who performs the monitoring of the project site, indicated that there were 64 avian mortalities near the plant from January through August 2017, Hardenbrook said.

Hardenbrook said while there were less avian mortalities when Crescent Dunes was offline for eight months, the degree of difference is “incredibly small.”

“We did see a small drop in the avian mortality rate while the facility was off-line. With that said, the decrease cannot be considered significant because it was so minor and could be attributed to a number of different factors,” he said.

“Overall environmental impacts are unknown as the facility has not been in full operation since completion. Monitoring will continue into the future,” Hardenbrook said.