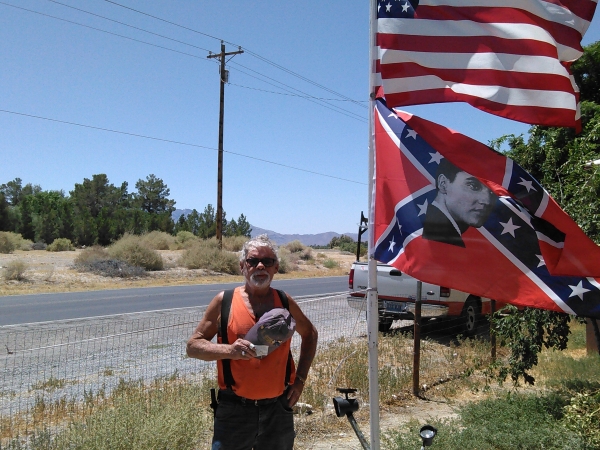 While driving last week along Wilson Road, just a stone’s throw from the Nye County School District office I spotted a residence displaying an American flag.

But beneath Old Glory was the Confederate battle flag waving in the wind.

It was then that I felt compelled to talk to the resident. Not in a confrontational manner, but more from a curiosity point of view, like any reporter.

As a 50 year-old black man who has never visited the South, the Confederate battle flag is not an inviting symbol to me.

Growing up in Tulsa, Oklahoma, there were a lot of places, including some businesses, where the flag was prominently displayed. I did not enter them because I knew what the flag represented.

Though many supporters of the flag contend it’s not a symbol of hate and intolerance, I disagree, mainly from what I learned about the Civil War and the reasons it was fought.

I agree with many prominent historians that the primary catalyst for the war was the issue of continuing slavery in this country, as evidenced by the secession of 11 Confederate states in 1861 when President Abraham Lincoln opposed the expansion of slavery.

While walking up to the front porch, I was apprehensive about how the resident would respond not only to my inquiries, but the fact that I was on his property.

Following the shooting deaths of nine black worshipers in a historic South Carolina church, the controversy over the Confederate battle flag continues.

Though lawmakers in that state voted to remove the symbol from the grounds of the statehouse, the debate is still reverberating in bordering southern states, whether they should follow suit.

There are several different issues surrounding the symbolism of the flag.

For many southerners, the flag represents their pride and Southern heritage.

Those who disagree say the flag represents a dark time in American history.

The gunman who fired the shots inside the church was depicted holding the flag in photographs posted to his social media website along with hate-filled diatribes about segregation and race wars in the country.

Photos of the gunman burning the American flag were also posted to the site.

The resident, Dave Rabun, a Vietnam veteran, has lived in the Pahrump Valley since 1988.

The 60-something native of Louisiana still has a distinct Southern drawl which was quite apparent as he invited me inside his home to talk about race relations in America and what the Confederate flag means to him personally, as a southerner.

As he took a long drag from a cigarette and paused, he noted that many other people have stopped by his property to take a photograph of his Confederate flag.

Though he did not say it was wrong to remove South Carolinaâs Confederate battle flag from the grounds of the statehouse, he did believe the action was an imposition on the state’s constitutional rights.

“The flag itself is part of this nation’s history,” he said. “I do believe it has something to do with race, and think it’s a god damn disgrace and a shame. The American flag stands for peace, freedom and liberty and I love it dearly. It’s flying above the Confederate flag right where it’s supposed to be.”

Consequently, Rabun shared his thoughts on how the country would look, had the Confederacy won the Civil War.

“I think it would have been a disaster,” he said. “The Confederacy would have started chopping until every damn state was a sovereignty all to themselves. Texas tried to do that and secede from the union. I believe in united we stand and divided we fall.”

The nation’s first black president was another issue on Rabun’s mind.

“I like his economic policies and the fact that he’s of mixed race heritage,” he said. “I like what he’s done with Obamacare because it’s about time somebody took care of our starving masses and people sleeping under bridges and starving.”

On the issue of race relations in the country, Rabun believes many Americans can learn a lot about racial cooperation by visiting the South.

“It’s better in the South,” he said. “Racial harmony was born and raised in New Orleans, Louisiana and I’ve seen it with my own eyes. God made gays, blacks, Mexicans and whites. We are all creatures of God. Jesus said he’s the son of God and I like to say that too. People should have something more important to worry about. There are a lot of other things more important than this silly bullâ¦t.”

During our conversation an elderly couple drove up to his flag paused briefly and drove away.

Our mid-afternoon discussion also delved into American pop culture, sports and other topics aside from race relations.

Though everyone has their own opinions about the flag, I must say I wasn’t quite expecting the responses to the questions I posed to Rabun after our hour-long conversation, nor did I expect the man to be as hospitable as he was.

I do admit I had a preconceived notion about the man before we met, due mainly to the display of the Confederate flag on his property.

I even had the thought that he may subscribe to the “Stand Your Ground” state of mind.

Instead, Rabun struck me as a kind, generous and compassionate American who loves his country and maintains a deep respect for all people, regardless of race.

I walked out of his home with a gifting of three ripe tomatoes from his garden and an offer to come back and visit.

While walking to my car I also came away with the distinct impression that things are not always what they appear to be in life.

No doubt, I’ll be visiting with Mr. Rabun real soon just to chew the fat again.