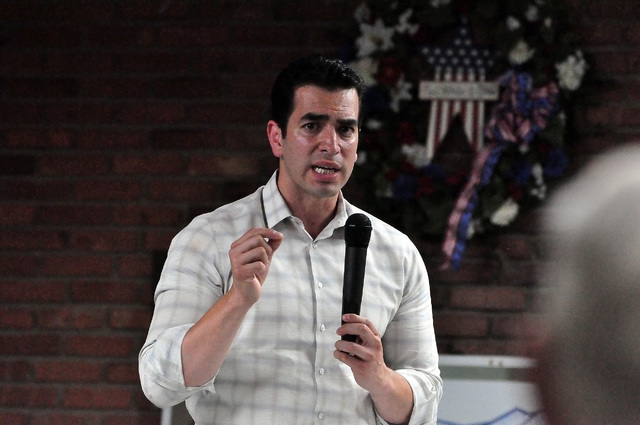 Congressional candidates have yet to agree on debate 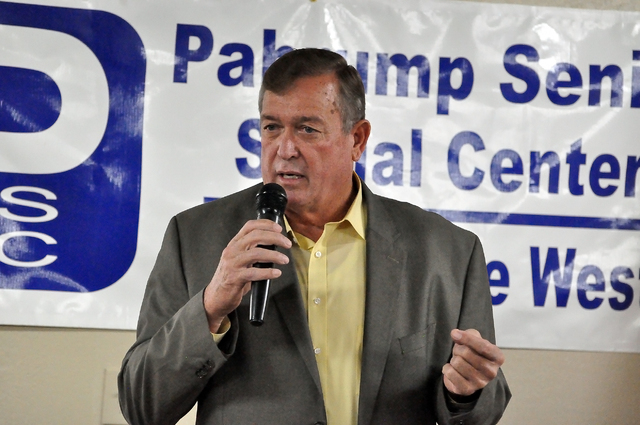 Republican incumbent Cresent Hardy, in jacket, and his Democratic challenger, Ruben Kihuen, have yet to agree on a future debate that could involve questions relating to Nye County. The two campaigns were not able to agree on a debate after a series of negotiations earlier this month. Special to the Pahrump Valley Times

Republican incumbent Cresent Hardy and his Democratic challenger, Ruben Kihuen, have yet to agree on a future debate that could involve questions relating to Nye County.

The two campaigns for Nevadas Fourth Congressional District were not able to agree on a debate after a series of negotiations earlier this month.

The ball is in Hardys court for the moment, Kihuens campaign Manager Dave Chase said. If he doesnt come back with something other than dismissing Spanish language debates, we will certainly push again. He cant hide from voters forever.

Chase said that Nye County issues could be discussed, if a debate is scheduled.

We obviously hadnt gotten that granular before Congressman Hardy threw his hands up, but our hope is a series of three debates would cover the issues facing every part of the district and we proposed doing the debates on TV so everyone could see them, not just those able to attend, Chase said in a statement.

Hardy, of Mesquite, is seeking his second term. He beat his in-party challenger Mike Monroe in the June 14 primary election and is now gearing up for the general election where he will square off against Kihuen, a Nevada state senator.

Hardys campaign manager showed up to a Democratic forum during the primary season welcoming the candidates to Mesquite. The Kihuen campaign later proposed a debate on whether Gold Butte in northeastern Clark County should be designated as a national monument. Following the proposal, Hardy told the Desert Valley Times in Mesquite that if Kihuen won the primary, they could have that debate.

When Hardy called Kihuen to congratulate him on winning the June 14 Democratic primary, Kihuen asked him for a debate date leading up to the Nov. 8 general election.

Hardys campaign followed up with a July 1 letter to Chase with a couple of options: Aug. 27 or Aug. 29. Under Hardys proposal, the debate would be in Ely and focused on rural Nevada issues such as health, transportation, public lands and mining.

Our first offer of a rural debate was a good-faith attempt to engage in a dialogue so that voters could hear from both candidates, Larry Farnsworth, Hardys spokesman said in an email.

On July 15, the Kihuen campaign issued a counter-challenge to the Hardy campaign. In a letter to Hardy campaign manager Ross Hemminger, Chase outlined several debates that would be focused on the Nevada Congressional District IV issues.

A proposed series of debates included a debate focused on Gold Butte. A second debate must be hosted by Univision or Telemundo, the Spanish-language TV stations in Las Vegas, according to the letter; a third debate would be hosted by KLAS in Las Vegas.

Because nearly 30 percent of the districts population is Latino, Ruben believes this community deserves to hear directly from the candidates and that a Spanish-language TV station must be included in our debate schedule, Chase said in a letter.

This point is not up for debate, and we will not schedule any debates unless this component is included, he added.

In a July 19 statement, Hemminger said: We have made a good-faith effort to work with you to create a series of debates but at every turn you inject ridiculous demands topped only by ludicrous statements that undermine any legitimate effort of Mr. Kihuen to serve the public.

While were certainly not afraid to debate that or any other issue, it seems silly that we wouldnt debate other issues, Farnsworth told the Pahrump Valley Times. Thats why we actually suggested a couple of weeks ago that we have a debate focused on that particular land issue along with other important issues affecting all rural communities in the Fourth District – including Nye County.

Chase in the meantime said that the Kihuen campaign believes voters deserve to hear from both Hardy and Kihuen on key issues.