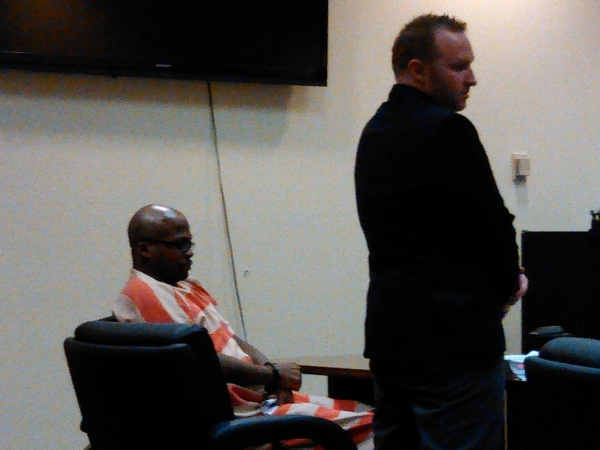 The man facing first degree murder charges in the death of an infant was sentenced to life in prison without parole as a habitual criminal after failing to register as a sex offender.

Cooper will be arraigned in a few weeks on the first degree murder charge related to the October 2014 death of a 13-month-old boy in his care.

Lane’s verdict was based on Prosecutor Michael Vieta-Kabell’s presentation the prior convictions of Cooper, who was convicted in July for failing to register as a sex offender.

Before rendering his decision, Lane said he contemplated the verdict for quite some time, while noting Cooper has racked up five felonies, 12 misdemeanors, multiple prison sentences and the repeated revocation of his probation or parole.

“Most of society tends to be sheep like me, who goes to church and goes to their kid’s sporting activities and lives a life of peace, but you are the wolf that goes out once a year and causes terror in somebody’s family and it just goes on and on,” Lane said. “It gets to the point where I look at this criminal history and I just say that I have to protect society from you. The district attorney, the cops, the courts are the shepherds trying to protect the sheep and you are one of the wolves who causes terror in people’s lives. So I am going to sentence you to life without the possibility of parole, good luck to you sir.”

Lane’s verdict elicited an emotional response from a member of the audience, who slammed open the courtroom doors as they were exiting the hearing, stunning many in the proceedings.

Cooper’s girlfriend also in the courtroom, in tears, was overheard questioning why Cooper, the alleged killer of her child, was given the maximum sentence for his prior felonies, as she was hoping for a more lenient sentence for her boyfriend.

Just prior to the verdict, public defender Nathan Gent pleaded for lenience from Lane due to his client’s physical condition.

“My client has been diagnosed with bone cancer which is an extremely serious condition and he says it’s in stage 3,” Gent told Lane. “He started chemotherapy and he’s got failure of the kidneys so now he’s on dialysis. There are some people who deserve to be punished and need to have the hammer laid down on them but this is not one of those situations.”

Cooper, according to authorities, was driving back and forth to Las Vegas from Pahrump while his girlfriend was in jail

Gent addressed Cooper’s legal issues in Colorado, where his client once lived, by noting the statutes related to registering as a sexual offender are far different than those in Nevada.

Gent also said his client made some bad choices when he allegedly got into an altercation while at another individual’s home in Las Vegas.

“Going into a house and getting in a fight with a guy was stupid, but is a misdemeanor battery case,” he said. “It was trumped up to burglary for entering a house and getting into a fight with a guy and when they arrested him on that, they said wait a minute, by the way you have lived here for six days and you have not registered as a sex offender.”

Cooper himself got the opportunity and spoke about his criminal actions over the past 24 years.

“I would first like to apologize to Nye County and yourself as well as my family,” he said. “I admit I have a rocky past and I don’t deny it but I’m asking for lenience here due to the condition that I have right now. Hopefully there will be a chance that I would maybe see my family again one day and that’s about all I have to say.”

Vieta-Kabell countered the defense’s argument and deplored Lane not to show any leniency toward Cooper.

“There’s an old saying, ‘fool me once shame on you, fool me twice shame on me,'” he said. “I don’t think we should give Mr. Cooper another chance to fool the system for a ninth time. Mr. Cooper has one of the worst criminal histories that I have ever seen. I don’t think Mr. Cooper deserves another shot to break the law and victimize another person.”

Regarding the second case, the Nye County District Attorney filed a criminal complaint against Cooper on July 17, charging him with multiple felonies including first degree murder as a result of child abuse, second degree murder, battery causing substantial bodily harm, and child abuse and neglect.