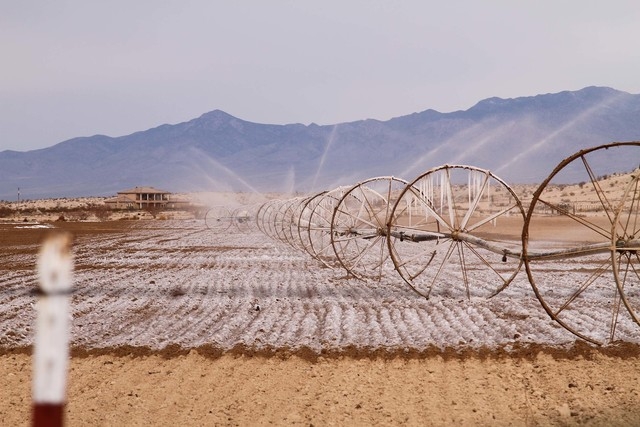 Relinquishment of water rights may help to contribute to the preservation of the resource that a desert community can not live without.

That was one item that Nye County officials incorporated into a proposed groundwater management plan for further study at a committee meeting on Monday.

A non-prioritized list of 11 recommendations, whittled down from hundreds, was identified to become part of the Basin 162 Groundwater Management Plan, which provides water to Pahrump residents.

Making the non-inclusive list was the adoption of a water conservation plan; implementation of an aggressive water education program; a metering system for new domestic wells; aquifer storage and recovery; the construction of water detention basins; expansion of water and sewer infrastructure by private utility companies; water banking and relinquishment of water rights program, a growth control program and restriction of future development agreements.

The list was compiled after hours of discussion from committee members, county officials and residents.

Among those commenting were John Bosta, an Amargosa Valley town board member and vice-president of the private well owners co-op. In furtherance of the mission statement of the co-op, Bosta advocated to ensure the right of private domestic well owners to draw up to two-acre feet of water per year. He balked at the presented recommendation of “banking” water while simultaneously relinquishing water rights, according to a formula, claiming it violated anti-speculation law.

Resident Kenny Bent said that the over-allocation of water rights are not a contributing factor to future potential threats to the area’s water supply. Many of those rights, he said, are not being actively used, instead he said they are “just on paper.”

Those allocated water rights allow for Pahrump’s population to theoretically expand to 500,000. That is a number, consultant Oz Wichman said, that threatens the longevity of the basin.

Bent said that many of the proposed issues and solutions were speculative because supporting data is not available. He urged residents to volunteer for static well-level testing to form a data-driven analysis to direct future basin protection endeavours.

Forty-four test wells are being monitored throughout the Pahrump Valley to provide data concerning aquifer diminishment. That data suggests that the level of the underground aquifer, in certain areas, has decreased by two-feet over the past 10 years. If that rate of diminishment continues, it is possible that there will be no water, in certain areas, within the next 30 or 40 years, officials said. In contrast to those figures, Wichman said that aquifer levels at other locations are increasing.

Bent said that there is not enough data available to make those assertions, citing a lack of broad grid-based sampling of static well levels throughout the valley. The current sampling, he said, is from a “clustered” area that does not provide a true assessment of the overall aquifer level.

One way to address the overall diminishing water table, committee members agreed, is to stunt population growth, which in turn would theoretically reduce water usage. A means by which this could be accomplished is to modify development agreements. That measure was adopted by a vote of 4 – 2.

The retirement of water rights through purchase was passionately discussed. Though four committee members favored the measure prior to public comment, a split vote of 3 – 3 left the proposal on the table. Ten residents spoke against including possible purchases as a viable solution to preservation of the water supply. Committee member Walter Kuver said there were 50,000 water rights in the valley “that have no water to back them up.” He told the committee he was not comfortable with the county purchasing those water rights because they have no water. Instead he suggested growth control to prevent the water rights from being used.

Resident Shane Navara said that limiting development is akin to stealing water from established domestic wells. “Water should be used to sustain life, not to gain profit. It is not a right to make a profit on something that we all use for sustenance,” he said.

Championing expanded development was farmer Champ Roach, who recently gained necessary initial approvals to include a marijuana growing facility to his established agricultural greenhouse operation. He suggested a 10-year moratorium on beneficial use proofing as well as the selling reclaimed water. He also said that Nye County has the opportunity to benefit financially from the growth and sale of the crop within the state. However, water is needed to realize those potential benefits.

Wichman said, following the meeting, that relinquishment would both preserve water for future use and allow residents to “do their civic duty.”

Bosta disagreed with the rationale saying, “The water below my land belongs to me.” Nevada is a common law state, he said. Under common law, and according to two state supreme court decisions, he contends, underground water is not governed by the same laws governing surface streams and waterways.

Basin residents share in the underground aquifer to meet their water needs. The Environmental Protection Agency, a federally funded and regulated agency, has been diligently working to “provide clarification” for the definition of “waters of the United States,” under the Clean Water Act. The proposal includes expanding the definition to include waters that have “significant nexus” to wetlands, tributaries and water subject to the ebb and flow of tides. The public comment period on the federal proposal closed on Nov. 14, 2014. An amendment to the act has not yet been passed.

Desert Hills resident Paul Cichocki spoke at the meeting and claimed that neighboring landowners have engaged in “water wasting” activities in order to preserve their water rights under the state’s “use it or lose it” policy. Cichocki and neighbors have engaged the assistance of Nevada Division of Water Resources engineer Jason King to address that problem.

King alerted the residents via email that they “do not have a claim of conflict” from the neighbor pumping, because the irrigation “right” was issued prior to the water rights that govern the domestic wells in Desert Hills. However, the email continues, “The waste of water from any user in the state is prohibited.” An investigation by the Nevada Division of Water Resources is ongoing, as the agency acts as the “water police.”

Though Wichman states that Nevada water “belongs to the people,” if it is not regulated in some way, it is likely it will not be there in the future. The residents and elected officials of Nye County have a long history of opposing over sight and regulation by hierarcal government, so why should they ask for further regulation?

“It’s a no-brainer,” Wichman said. “If you are sitting here in the knowledge that this (diminishment of the aquifer) is taking place, why would you sit back and do nothing?”

Federal law supersedes state law in all matters, including that of who owns the water. “The worst thing in the world that could happen in the state of Nevada is to let the federal government get ahold of the water,” Wichman said. Water, he said, is at the heart of the environmental movement, which is “driving the bus” of federal regulation.

The committee has been working for over a year to identify priority groundwater basin issues, according to Nye County Director of Planning Darrell Lacy.

Lacy said the recommendations are non-binding and must be “fine-tuned.” The public will have more opportunities for comment as “multiple layers of discussion and approval” are still needed, according to Lacy. The state has asked for recommendations from the local level, Lacy said, so Nye County would not be stuck with regulations in which they had no say.

Once the recommendations are finalized by the committee, they will be presented to the Nye County Water District governing board.