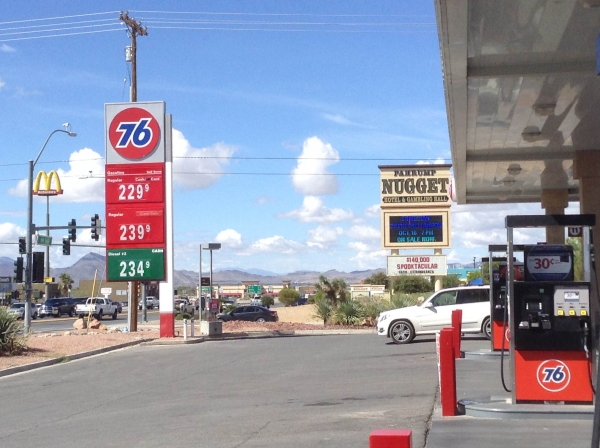 Motorists traveling in Nye County will soon be paying more at the pump.

The County Commission unanimously voted to raise the motor fuel tax by 5 cents a gallon at Tuesday’s commission meeting.

The 5-0 vote will see the tax raised from its current 4-cent per gallon rate to 9 cents. The new rate will go into effect Oct. 26.

The motor fuel tax in Nye County hasn’t changed in 30 years, so it will be used to catch up with the increased cost of road maintenance. The fuel tax dollars must be spent on roads, which is authorized by Nevada Revised Statute 373.

All net proceeds are deposited in the county treasurer’s fund and disbursed in accordance with the provisions of state law for construction and/or repair of public roads.

“It doesn’t go to any state highways, it goes strictly to county roads that our county staff has to maintain,” Commissioner Lorinda Wichman said. “There is no distinction between any of the communities, it goes where it’s needed. The RTC makes a determination based on condition and complaints and driving those roads themselves.”

The suggested 5-cent gas tax increase, the highest that can be implemented without a vote of the residents, was proposed by Commissioner Dan Schinhofen on Aug. 4.

The current 4 cents is projected to generate $838,000 in revenue to maintain the county’s 2,747 miles of roads, including bridges. That includes maintaining signage, traffic signals, plowing roads in winter and repairing flood damage every summer. The full 5-cent increase will put an additional $1.1 million in the road fund coffers, projecting revenue at $1.9 million annually.

Public support of the tax hike has been split, but most agree that something needs to be done to ensure the roads they all drive on each day remain safe and operable.

“To those who say that they cannot afford 5 cents… broken axles and busted tires cost way more than the extra buck for a typical fill-up,” Pahrump resident Bill Stremmel said during public comment.

John Koenig explained that with more advanced vehicles on the road today, pumps aren’t seeing the usage they once did when the fuel tax was last heightened and that this might not be the last time you see this issue brought up.

“Cars are getting more efficient compared to what they were in 1982 and 1985, when you look at what’s going on today getting 25, 26, 30 and in some cases 50 miles per gallon, that means we’re not getting as much fuels being bought,” Koenig said. “We also have a very big load of electric cars out there and I know that VEA is in the process of putting in a substation to start filling up electric cars.

“So hang on guys, there’s probably more to come.”