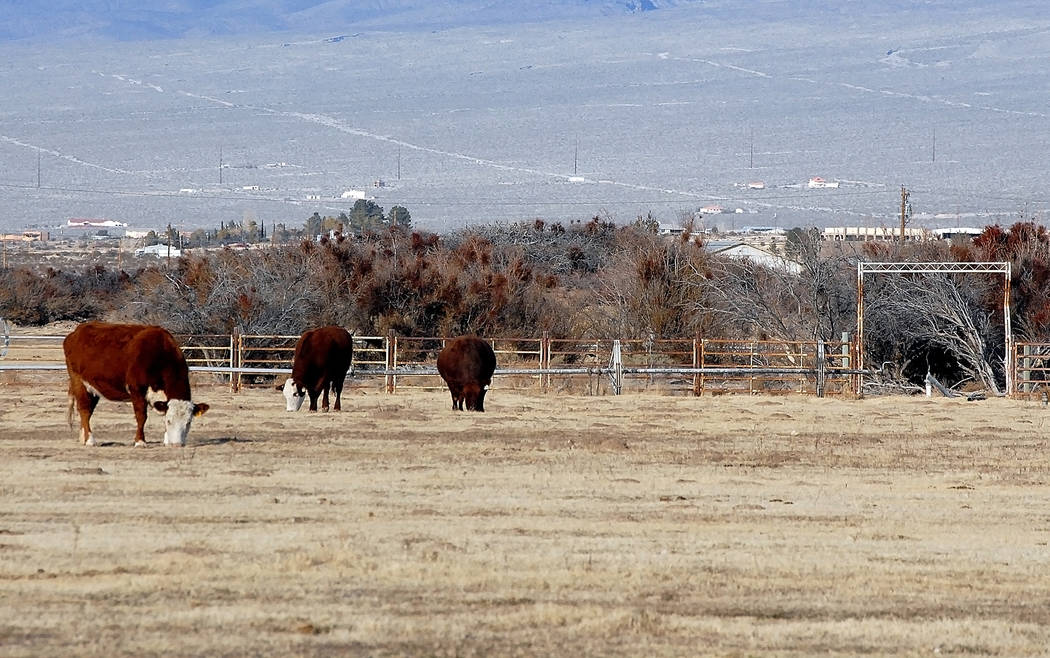 Horace Langford Jr./Pahrump Valley Times Nye County commissioners approved rezoning of 26 parcels from rural to suburban estates, a change that was prompted by the request from neighborhood's residents. Suburban estates zoning district is intended for low-density single-family residential living and does not allow livestock.

Nye County commissioners rezoned 26 parcels from rural to suburban estates in a Pahrump neighborhood, a change that was prompted by a request from the neighborhood’s residents.

The parcels are located in the vicinity of River Plate Drive and Red Rock Drive, south of Amarillo Avenue and north of Hickory Street.

Residents of 25 of the 26 parcels were in support of the change, officials said. Twenty-six lots are already grandfathered.

A group of homeowners had previously submitted a petition asking the Pahrump Regional Planning Commission for rezoning.

The zone change request to suburban estates zoning was prompted after residents of the neighborhood filed a code compliance complaint against Sandquist relating to the livestock that she kept on her property.

Some argued against the change at the Nye County Commission meeting, others said they supported it.

Linda Hatley, who spoke on behalf of some people who live around the 26 parcels, called the proposal “infringing on personal choice.”

“If all 26 of those (parcel owners) agree that they don’t want livestock, why do we need a law to state they can’t have livestock?” Hatley asked commissioners.

“The people on the other side of the street have livestock, they do not want this. They are afraid that once this little kettle of beans gets cooking, the others are going to try,” Hatley said.

Tom Duryea, one of the property owners, said he was in favor of rezoning.

“We are not telling anyone how to run their lives, especially the people outside of the 26 (parcels),” he said.

“We want to make sure that we have the choice of the lifestyle we have. And this proceeding will help us to keep the lifestyle that we’ve had for many, many years,” Duryea said.

Donna Cox, the only commissioner who voted against the change, questioned what rezoning could accomplish and said Pahrump needs to decide whether it wants to be urban or rural.

“Right now, they have the best of both worlds. They can have animals or not have animals without restricting the zoning of their neighbors,” she said.

“I support this because they are the property owners and they want to zone themselves that way, they have every right to do it. And they’ve gone through the process, which was long and arduous. There’s a lot of history in this area,” Schinhofen said.

“Already in our land use category, rural estates one-acre lots are allowed, but one-acre suburban estates are not allowed in our current master plan, and this master plan amendment would correct that,” Lacy said.

The difference between one-acre suburban estates and one-acre rural residential is the allowance of livestock on a parcel, Lacy said.

The commissioners approved the rezoning with the condition that the Pahrump Regional Planning Commission passes a waiver on the 40-acre minimum.