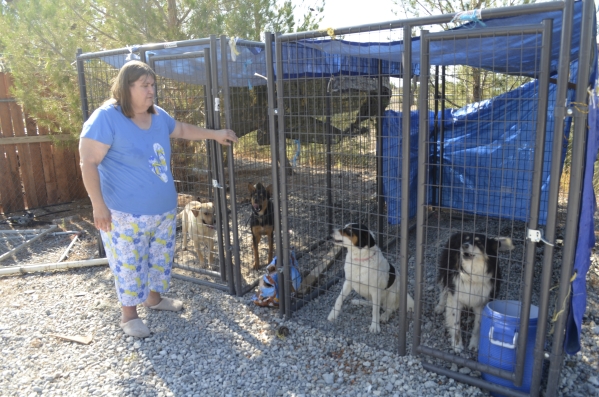 Lynette Sandquist wants to keep her 12 dogs, six cats and several goats on the property, but county officials and some of the residents aren’t amused by the idea.

Pahrump Regional Planning Commission on Aug. 12 denied a multi-pet permit, tier II for Sandquist, who lives at 2650 S. River Plate Drive in Pahrump based on the records, the testimony given by Animal Control and general public and the location of the property.

Over the course of her career in animal services, Sandquist had amassed a collection of 12 goats, 12 dogs, six cats, three turkeys, two chickens and two ducks, as she routinely would pick up animals after people left them behind, she said.

“They gave me life, because I have my boys and everything else and (they) help out too, but two of them aren’t here right now,” Sandquist said. “But I got the animals because I want my boys to learn responsibility. … But I never went overboard with anything.”

Under a multi-pet permit tier II, a resident is allowed to have over 10 cats or dogs or a combination thereof which is determined by the Pahrump Regional Planning Commission through the hearing process of the conditional use permit.

Officials said they had received numerous complaints from nearby residents and Nye County Animal Control. Records also indicate there were 29 calls over the four years for separate addresses where Sandquist had previously lived. While some were founded, others were unfounded, officials said.

In addition, officials said there is a pending amendment to title 6 which is proposing to limit the number of permits issued by Animal Control. If the title 6 changes are adopted as proposed, the number of existing permits already exceeds the number allowed and that number doesn’t include pending applications such as Sandquist’s.

Since Sandquist moved into the property three months ago, the strife drew law enforcement and Nye County Animal Control to the property.

Animal Control Officer Susan Ryhal said Sandquist had never been cited because the agency tried to “extensively” work with her.

Sandquist dismissed numerous objections from several of the nearby neighbors who complained about noise, odor and flies swarming around the neighborhood.

“My dogs are no different than any other dogs, they bark only when the coyotes howl and they bark when there’s a siren and if somebody comes on to the property and that’s what I have them for,” she said.

John Fesnock said one of the dogs had once jumped into his backyard and noted that Sandquist needs to do a better job at maintaining her animals.

“I think the number of animals that they have is out of order for the neighborhood,” he said. “When you have tens of goats, tens of dogs, turkey and an assortment of cats, I think that’s a little over the top.”

Michael Drawhorn, a retired Chicago police officer who had moved to Pahrump 16 years ago said the issue caused him to stop using his backyard for outdoor cooking.

“The flies are unbearable, I can not barbeque … I went out to barbeque on July 4 and the smell was just unbelievable,” he said.

After board members denied the request for permit, Sandquist said she plans to appeal the decision.

“You could come over right now and my place is clean,” Sandquist told the commission. “The dogs are clean, the animals are clean and they are all in one corner of the room, and they are very well mannered and very well taken care of.”