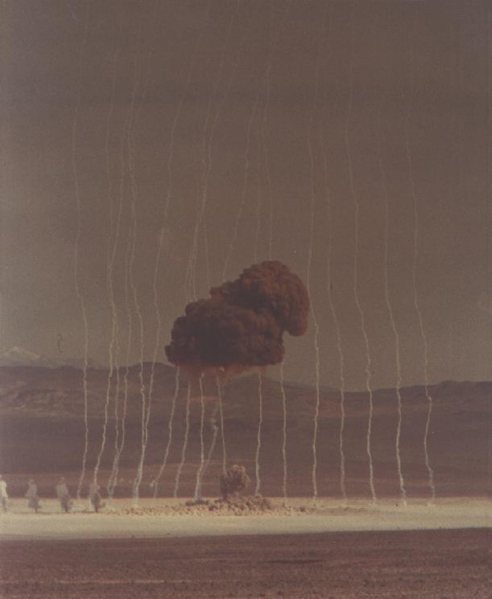 Jan. 27 the 65th anniversary of the first detonation of a nuclear device at the Nevada Test Site. To commemorate it, on Feb. 2, Nye County Commission Chairman Frank Carbone proclaimed the importance of that event to the history of Nye County, the state of Nevada, and our country in an official proclamation.

It is a modest way to recognize one of a very few locations on earth where human beings first learned to release the energy of the atom.

Birth of the Bomb

In the early morning on July 16, 1945, the first atomic bomb was detonated on a bombing range near White Sands, New Mexico. It had the equivalent yield of 19,000 tons of TNT. Three weeks later, on Aug. 6, a bomb known as “Little Boy” was dropped from a B-29 named the Enola Gay on Hiroshima, Japan. On August 9, a second bomb was dropped on Nagasaki. Two days later, Japan surrendered.

Following World War II, the United States continued its development of nuclear weapons, testing them in the South Pacific. American authorities declared it would take a national emergency for testing to occur within the United States. The outbreak of the Korean War in the summer of 1950 presented such an emergency. U.S. officials stepped up production of the materials necessary to make atomic bombs and assigned higher priority to development of an H-bomb. But where were the bombs going to be tested?

A site in southern Nevada was soon chosen. On Dec. 18, 1950, President Harry S. Truman designated a portion of the Las Vegas–Tonopah Bombing and Gunnery Range for nuclear weapons testing. Located 65 miles north of Las Vegas in Nye County, the site initially consisted of about 640 square miles. Eventually it was expanded to about 1,350 square miles, about 40 miles long and 28 miles wide. The area’s sparse population was a major factor in its selection.

On Jan. 27, 1951, the first atomic test, named Able, was set off at the site. It was a 1-kiloton bomb dropped from a bomber over Frenchman Flat. Over the next 10-plus years, 99 more atomic tests were conducted in the atmosphere above the Test Site. In 1962, following the signing of the Limited Test Ban Treaty, testing moved underground. The treaty prohibited testing in the air, in outer space, or underwater. In all, 828 nuclear devices were tested underground at the Test Site.

In the mid-1980s, when activity at the Test Site was still going strong, 9 percent of the workforce in southern Nevada is said to have been either directly or indirectly dependent on Test Site activities. Total employment was more than 18,000 and it contributed $1 billion a year to the southern Nevada economy.

During the mid-1950s, my father, brother, and I operated a mine in Reveille Range, located north of the Test Site. Our camp was located on the west side of Reveille Valley, where we could look down the valley onto the Test Site. From our ringside seat, we witnessed any number of nuclear detonations, most in the early morning hours.

I remember one time, after eating lunch in the shack we called home, emerging into the daylight and being startled to see a big mushroom cloud down the valley, silhouetted against the gorgeous blue Nevada sky.

My father and I went to work on the Test Site in 1958. He worked in tunnels there for 20 years until he retired. I worked there and at the test range out of Tonopah during the summers to earn money for college.

I doubt I would have been able to complete college without that employment.

The Nevada Test Site represents a powerful presence in human history. Its meaning is deep and profound. It was there that human beings began to learn to control the enormous energy present in the atom – first with uranium and plutonium, then with hydrogen. The development of weapons of war based on release of these energies by the United States and the Soviet Union prevented, I believe, the outbreak of a third world war, and does so today. I believe that without the threat of use of nuclear weapons, there would have been a high probability of a terrible ground war in Europe between the United States and the Soviet Union. Nations tend to practice restraint if they think they might be obliterated by an opponent’s nuclear weapons.

It was at the Nevada Test Site that people went a long way toward harnessing the enormous power of the atom. In that energy source lies the future of humanity.

Native Americans and numerous cultures around the world have what are called sacred sites. A sacred site is a locality or environmental feature that is believed to be profoundly special and deeply meaningful. Examples include sites where human beings are thought to have first appeared on earth, where the gods may make themselves known, or where great events occurred, such as the discovery of fire.

Sacred sites include Jerusalem and the place in Mexico where the Virgin Mary appeared to Juan Diego.

I believe the Nevada Test Site might well qualify as a sacred site.