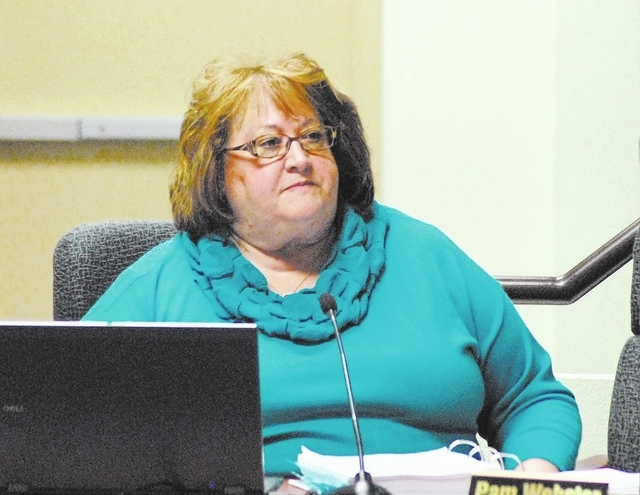 The county manager is an at-will employee serving at the pleasure of county commissioners. The agreement may be terminated at any time by either party without cause, to take effect 90 days later. Webster will be provided a county owned vehicle as often as possible under the agreement, as she is required to travel to Tonopah and outlying areas.

“This is my first 5-0,” Webster proclaimed with joy. She was referring to the unanimous vote. Former county commissioner Gary Hollis used to cast the sole vote against her contract.

Webster enjoyed accolades from county commissioners at the meeting.

“I’m real happy to see this on the agenda,” Commissioner Lorinda Wichman said. She made the motion to approve the contract extension “wholeheartedly” and said Webster deserved to have a unanimous 5-0 vote all along.

When asked for her opinion, Commissioner Donna Cox said, “I’m fine with it if Pam is.”

There is a clause providing the county will pay Webster’s medical, dental, vision and health insurance for life upon termination of the contract for any reason, though the benefits may be provided by the county through payment of Medicare and supplemental coverage premiums.

When asked to explain, Webster said, “I’m Medicare eligible, so it would just be a supplement to the regular Medicare offered by the county to other retirees as well.”

Actually, District Attorney Brian Kunzi said the vote was irrelevant. “She could leave at any time as soon as she could figure out a way to get me off her ankle.”

“Taking the rest of the county with her,” Wichman added.

That enabled Osborne to have five years of service to qualify for the state Public Employee Retirement System (PERS) benefits. Commissioners then made Webster county manager in March 2012 but at the time she had plans to retire at the end of this year.

Webster was hired as a county finance director in July 2006 and promoted to assistant county manager, a new position, after a 3-1 vote of the commission in July 2007.