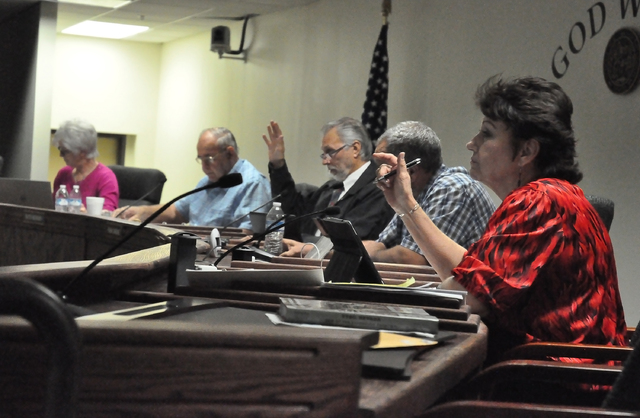 Horace Langford Jr. / Pahrump Valley Times - Nye County Commissioners on Tuesday approved several federal grants amid grant fund's negative balance. The practice has been standard in the county for years, and the county officials said the grant fund operates as a reimbursement.

Nye County Commissioners approved several grants amid the grant fund’s negative balance. However the practice has been common in the county, as the fund operates as a reimbursement, officials said.

“We are working on doing an interfund loan to be able to operate that fund as a positive cash balance but until then that’s how it functions,” she said.

An interfund loan would be made to the grants fund from another fund, and the general fund would bring the balance to a positive status and allow for regular grant business to transpire without operating at a negative cash balance, Rucker added.

When grant reimbursements are requested by the county, the grantor also requests a status update of the grant, to ensure the grant is following the schedule and budget, officials said.

“For these reasons the grants fund is negative, because the county must pay for services, labor, materials on grant projects, before the county is able to request reimbursement from the grantor. The grants fund has operated in this manner since inception, and our hope is to create this interfund loan to correct the negative cash issue,” Rucker said.

“You have to spend the money to get it reimbursed, but most of them are very quick about reimbursing, they don’t drag it out and so, once you spend it and request the reimbursement, it’s usually a 30-day turnaround,” Nye County Manager Pam Webster said.

One of the grants, the three-year Federal Grant Community Oriented Policing Services, would allow the Nye County Sheriff’s Office to fill three officer positions. The amount of the grant is $618,577, with a county match of $150,000.

“We are losing approximately three to five people every year, so we won’t have a problem with bringing those people in under a regular basis, they’ll be just already working with us,” Nye County Sheriff Sharon Wehrly said.

Thanks to the grant, the sheriff’s office would be able to add more people to Beatty, Tonopah and Round Mountain, Wehrly said.

The Nye County Sheriff’s Office hasn’t added any officers, Wehrly said. Instead, it has replaced employees at a lower scale, and they are being paid much less than people who have retired or moved on to other jobs.

Commissioner Donna Cox was the only commissioner who voted against approving the grants.

“I would like to hire a lot of people to do a lot of things in this county, but the money is not there, I’m just not comfortable with this,” Cox said.

The revenues from the funds will be requested as soon as expenses are incurred and in accordance with the grantors’ schedule for draw-downs, Rucker said.