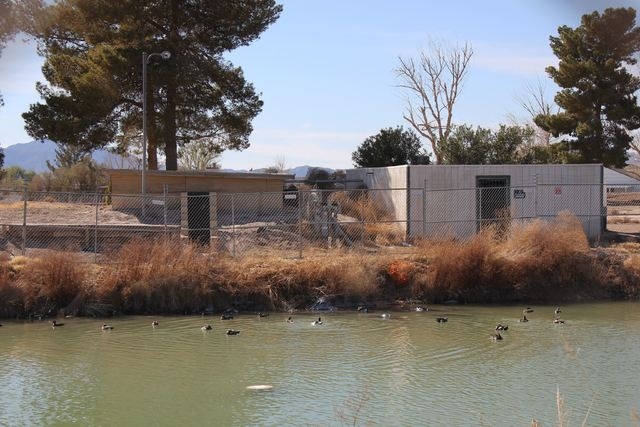 An agreement has been reached between the county and Utilities Inc. of Central Nevada regarding remediation of ponds on the former Willow Creek Golf Course.

A last-minute, non-disclosed settlement agreement between Nye County and the utility resulted in a zoning board appeal discussion being removed from the Pahrump Regional Planning Commission agenda Wednesday.

Planning Director Darrell Lacy reported that District Attorney Angela Bello was instrumental helping to resolve the dispute, which has brought the company before various county boards over the course of the past several months.

Utilities Inc. was appealing the county’s decision which required the company obtain a conditional use permit to improve the ponds at the former golf course. Utilities Inc. contended that the Nov. 21 Notice of Final Decision by the zoning board that directed the company to obtain a conditional use permit for proposed improvements at the golf course, recently re-named “Discovery Park,” was not a decision, but rather an opinion.

The utility company further contended that they were not initially advised that a conditional use permit was required for the pond cleanup plan, and instead claimed “grandfathered status” for the project.

The utility maintained that the county unnecessarily delayed the project by demanding a conditional use permit when none was needed.

Utilities Inc. advised Nye County in writing on Dec. 1, 2014 that they are “ready to remediate the environmental hazards at the ponds, and return the lands to an improved safe status as open space.”

The utility proposed building a new five-acre treatment pond, while the contaminated pond was remediated, with treated effluent, or recycled water. As part of a master plan for the property, the company also planned to rehabilitate pump stations, remove dead trees and replace pipelines.

Also pulled from the items to be discussed at Wednesday’s meeting was the company’s request for a conditional use permit to construct a new and expanded effluent handling facility at the location.

As part of the master plan for the former golf course, the company included plans to rehabilitate pump stations, remove dead trees and replace pipelines.

Utilities Inc., acquired the former golf course in bankruptcy court in the summer of 2013. Problems with the ponds predate Utilities Inc.’s ownership. The golf course closed in November 2008 and seven months later the county issued a letter recognizing the ponds as a health hazard and demanded the situation be addressed.

NDEP also issued a finding of alleged violation against the prior owners and the Fifth Judicial District Court issued a permanent injunction mandating the former owner immediately remediate the ponds to bring them into compliance. On Sept. 19, 2012, the Fifth Judicial District Court declared the ponds were “a clear and present danger to the community.”

Utilities Inc. of Central Nevada President Wendy Barnett, who was not at Wednesday’s meeting, declined comment on any pending settlement.