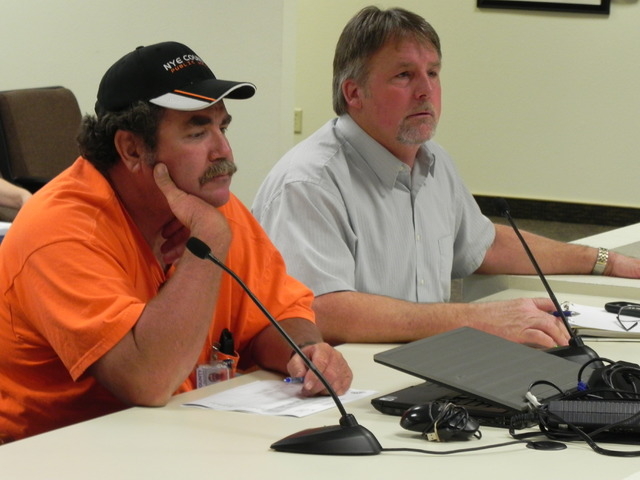 TONOPAH — A split county commission voted 3-2 Tuesday to approve two agreements with the Nevada Department of Transportation to construct roundabouts on Highway 372 at intersections with Pahrump Valley Boulevard and Blagg Road.

Commissioners Frank Carbone and Donna Cox voted against. Nye County would have to contribute $450,000 toward the cost of each roundabout, within 90 days of the execution of the agreement; they will use money paid by developers for impact fees. NDOT would provide $1.8 million out of Highway Safety Improvement Program funds from the Federal Highway Administration.

Nye County Public Works Director Dave Fanning said the impact fee money has to be spent by Dec. 31, 2015, a fact NDOT is aware of. He said there are still right-of-way concerns by private landowners NDOT has to address, which would take the longest because of the legal process involved.

County Commissioner Butch Borasky voted in favor, though he still has questions, like the number of lanes in the roundabout, the profile and his request to schedule public workshops where people could be told how to drive through roundabouts.

“I have a lot of people in my district that are frustrated about it,” Borasky said.

Planning Director Darrell Lacy said this agreement is merely a first step so NDOT can move forward answering those questions. Lacy said commissioners will have a chance later to look at the plans. But the agreement calls for the county to complete a review of each preliminary plan within five working days, or NDOT will consider the plans acceptable and proceed with the project.

“It hasn’t been finally designed yet, you have to sign these agreements, not move forward. The board already approved this,” Lacy said.

“I have not been happy with the approval of these roundabouts on Highway 372 to start with. I just don’t believe you should put these on a major highway. I would’ve rather seen the $900,000 go on a (traffic) light on the corner of Blagg and 372,” Cox said.

Carbone said he isn’t a fan of roundabouts, a position he stated at a meeting of the capital improvements plan advisory committee when the idea was first discussed.

Schinhofen said he doesn’t like roundabouts either, but a traffic light at Highway 372 and Blagg Road would cost $2 million alone. Nye County has $900,000 to spend, which should be used to follow the capital improvement board recommendation and address both intersections by building roundabouts, he said.

The county will be given copies of the preliminary plans and invited to the meeting reviewing specifications. The NDOT agreement is effective through Dec. 31, 2017 or whenever the construction is completed and accepted.