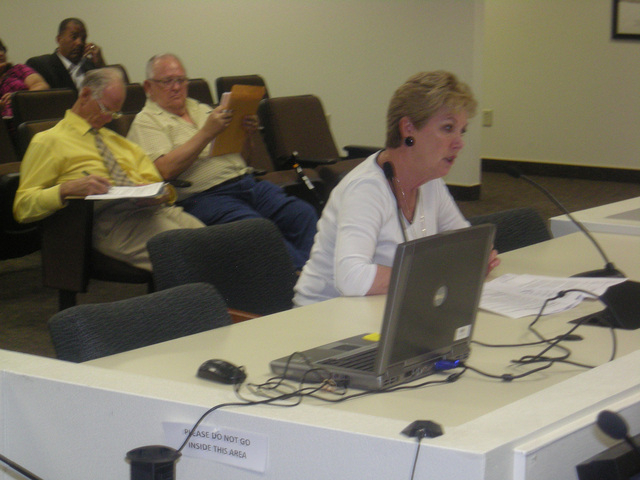 Nye County Commissioners Tuesday agreed to co-sponsor a $750,000 grant application by the town of Pahrump for an environmental impact statement at the Pahrump Airport.

Commissioners previously passed a resolution to support the town’s grant application, but Nye County District Attorney Brian Kunzi said the Federal Aviation Administration wanted more clarification the county will be a co-sponsor, which will take over as the governing board of the town of Pahrump Jan. 5, 2015.

Nye County, as a co-sponsor, would be legally and financially obligated to carry out the requirements of the grant, the DA explained. Without co-sponsorship from Nye County he said it was unlikely the FAA would approve the grant for the EIS.

Commissioner Frank Carbone voted against the request, Commissioner Donna Cox didn’t attend the afternoon session of the commissioner’s meeting and was absent for the vote.

Kunzi said he has been dealing with the FAA for several months over the town takeover issue.

“That’s caused a lot of consternation with the FAA. They’re very uncertain of the legal status of the town with everything that’s going on, so in discussing it with them, I finally asked them, look we need to stop this little dance. It appears your little issue is whether or not the county will formally become a co-sponsor, which means the county could be jointly and severably liable for the obligations under the grant. Their argument is the county has co-sponsored every other FAA grant they’ve done,” Kunzi told commissioners. “They think the county brings a lot of expertise to the table, as a co-sponsor they could assist in the grant.”

The DA said Nye County would be responsible for the grant anyway in January. He said the FAA felt the county may not stand up to its obligation to pursue the project, in which case the grant would go away.

Pahrump Town Manager Susan Holecheck said the FAA wants to know if the town will have standing in the future to receive other airport improvement program grants. The co-sponsorship will give the district attorney more comfort reaffirming the resolution of support taken last year, she said.

Holecheck said she hoped the town and the county could continue to move forward on the Pahrump Airport project which she admitted takes years and years. She said they’re now getting ready to do the airport design.

Commissioner Dan Schinhofen said the county is taking a step further than the resolution of support, which isn’t really legally binding, as being a co-sponsor makes the county liable for the grant. But Commissioner Butch Borasky made the motion to approve.

“We do this with Beatty, Gabbs and Tonopah all the time, there’s no reason we can’t have an airport here,” Borasky said.

Carbone said the county assigned the public works director to act as a go-between with the town on the airport project.

“I’m not comfortable yet, I need to understand a lot more than just what the little bit that we’ve been getting. I know I sat down with a couple of folks from the town in the past,” Carbone said. “In my mind I don’t think I have enough information for me to make a decision.”

Schinhofen joked, “As far as the airport is concerned my wife doesn’t want me to do anything with it because she says the flight path is going to be right over our house. But I see the benefits with having it here.”

The existing county-run airports in Tonopah, Beatty and Gabbs receive millions in FAA grants, which pay for 95 percent of the project costs. At the Tuesday meeting, commissioners awarded a $1.07 million contract to Pearson Brothers Construction to grade a runway safety and object free area at the Beatty Airport, and a $144,000 contract with Atkins North America for engineering and management work. The county is applying for a $1.15 million FAA grant application for this project.