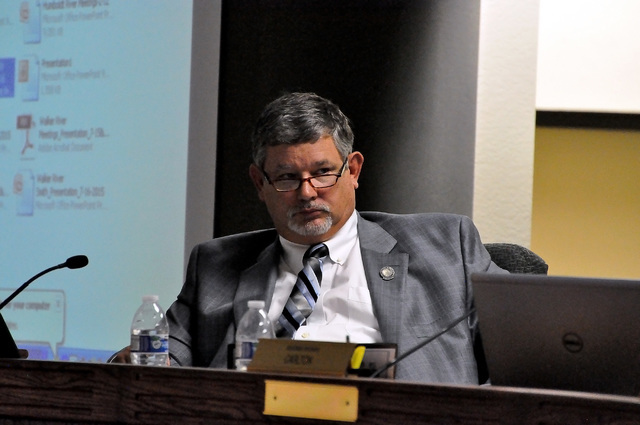 A court petition challenging Assemblyman James Oscarsons victory in the GOP primary in June has been dismissed.

Clark County District Court Judge Elissa Cadish admitted an error but said theres no evidence to demonstrate that those errors are sufficient to change results.

Assemblyman James Oscarson eked out a 113-vote primary victory which was swung in Clark County, where Trenner questions the results.

Trenner received 1,586 votes in Nye County, compared to Oscarsons 1,348. In Lincoln County, the election swung in Oscarsons favor, where he defeated Trenner 67 votes to 30. Trenners contention however hinged on Clark Countys results, where she lost to Oscarson 573 votes to 239.

Cadish added that the court doesnt have authority to call for the revote that Trenner wanted. Nevada law allows county commissioners to call for a revote, but only in catastrophic situations that prevent people from casting their ballots, such as a fire that destroys a polling place, according to Oscarsons attorney, Daniel Stewart.

We are pleased with the ruling, Stewart said. Judge Cadish understood the law and ruled correctly. Now, on the to general election.

Oscarson will face brothel owner Dennis Hof in November. Hof is running as a Libertarian.

Stewart said that Trenner did a pretty admirable job representing herself in court.

She argued her position honestly and with real passion. I was quite impressed with her efforts, he said.

Clark County election officials said they had printed the wrong Assembly district number on 1,858 cards that were sent out this winter. The error emerged while officials were retooling their system to conform with a new law that calls for town board members to be elected, according to a Associated Press report.

The database errors were fixed in January and sample ballots had the correct districts listed, officials said. Trenner said she heard from some people in the area that the registration card matter caused confusion and she said she wasnt confident in the accuracy of a database of potential voters that she was using.

But Trenner was unable to provide specific examples of voters who declined to cast their ballots in the race because of the registration card mix-up, the Associated Press reported.

During the hearing on July 12, Trenner said she hadnt been allowed to call two of her witnesses.

I think she was massively incorrect, Trenner said about Cadishs decision following the hearing.

Trenner said she isnt sure whether she is going to appeal the ruling.

Lisa Mayo-DeRiso, a member of the Citizens Task Force for Voter Rights, a non-partisan group that aims to protect voter rights, said that the group will not file an appeal to Cadishs ruling in Trenners case.

The other five GOP candidates who lost in the primary, Diana Orrock, Steve Sanson, Connie Foust, Mary Rooney and Blain Jones, will have their court hearing on Monday, according to Mayo-DeRiso.

Associated Press contributed to this report.