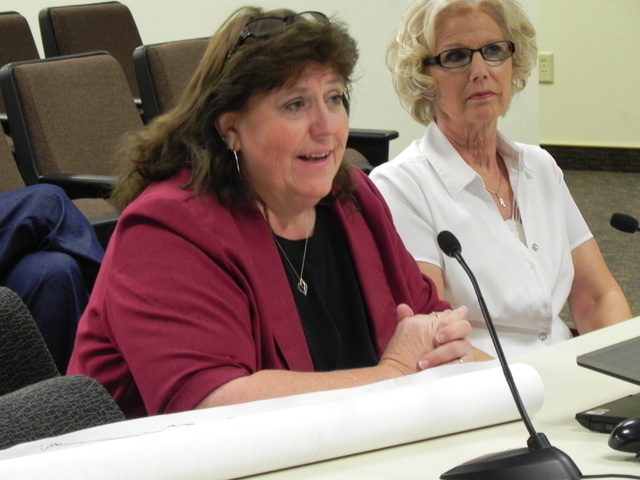 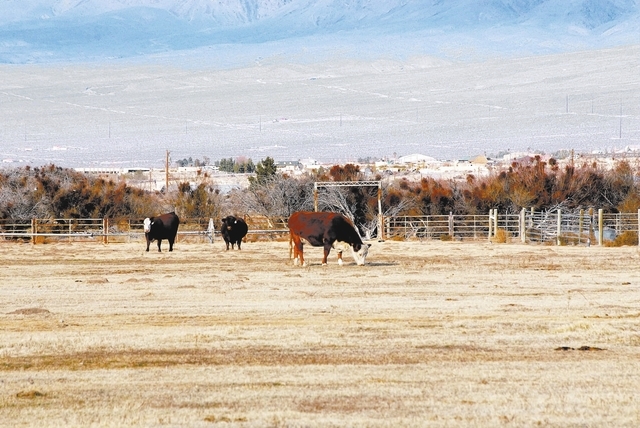 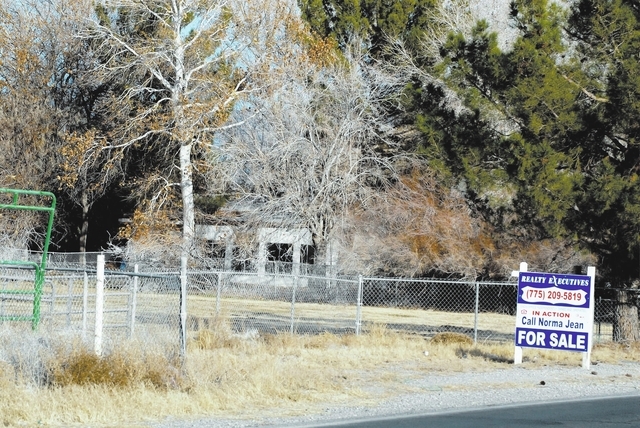 Nye County Commissioner Donna Cox thinks the county should buy the Binion Ranch up for sale on Wilson Road for $2.2 million and use it for things like a Nye County Fairgrounds, hay rides, deep pit barbecues, running trails and other purposes.

“The ranch is located on 138 acres at a prime location and has historical value along with 139 acre feet of water rights,” Cox told fellow commissioners at a Tuesday meeting.

The property is owned by the family of the late Ted Binion, who owned the Horseshoe Casino in Las Vegas before his death. The trial of his accused murderers, Sandra Murphy and Rick Tabish, aroused nationwide publicity and Tabish’s caper digging up Binion’s silver buried where the Pahrump Nugget casino is now.

Cox said there could be an old west town and Indian village on the property. That raised the ire of County Commissioner Butch Borasky, an avowed opponent.

“I don’t understand why this is even on the agenda, spending $2.2 million of taxpayers money for what, is this Harley World II?” Borasky asked.

Harley World is a derisive reference to a defunct plan by the town board to build a water park and western themed village at the 427-acre fairgrounds property on Highway 160 deeded to the town by an act of Congress in the 1990s. The Pahrump Town Board spent $700,000 on studies with Contour Entertainment that were eventually shelved.

“When we’ve had four straight years of budget problems we’re going to pop out $2.2 million? We already have land everywhere?” Borasky said.

County Commissioner Frank Carbone, who is a frequent ally of Cox on many issues, persuaded the board to have county staff study the idea and report back within 90 days. He wanted to find out what the county’s return could be on its investment. Carbone suggested it could be a business park or a drainage basin.

But he asked, “if we could turn this into a fairgrounds, what do we do with the fairgrounds property we already have established out on Highway 160?”

Commissioner Lorinda Wichman said a deed restriction limits the Highway 160 property to fairgrounds or it reverts back to the federal government.

Cox said she received information second hand it could cost $5 million to level out gullies at the Pahrump Fairgrounds property. Her husband, Don Cox, said under public comment the fairgrounds is also a ways out of town for local businesses to benefit.

County Commissioner Dan Schinhofen had concerns over easements on Wilson Road and Basin Avenue that would have to be widened.

Nye County Planner Darrell Lacy said Wilson Road at Highway 160 is already a problem intersection, acquiring the property would give the county a traffic alternative to make a connection to Basin Avenue. He added it could be a flood retention basin, giving relief for surrounding lots in the area.

“If it’s something you might want to move forward with, the water district had been putting money aside to purchase water rights in large blocks if they become available,” Lacy said. The county could buy just the water rights, reducing the price for the property, he said.

Former Nye County Water Board member John Bosta said those could be old water rights, which are valuable.

It could be a moot point in 90 days. Norma Jean Opatik, a Realtor with Realty Executives, said there have been quite a few offers for the property but potential buyers had issues obtaining the funds. It was first advertised in January.

“We do have an offer, it’s still going forward, but has not been put in escrow,” she said.

Cox said a historical building is on the property that could bring in money, Opatik said there is a four bedroom home probably 1,700 to 1,800 square feet, built in 1959. There’s also a barn with 17 stalls constructed so hay bailers could unload inside. The ranch manager still has some livestock on the property, Opatik said.

“I just need to caution this board, remember with ownership comes responsibility and when you get into a situation where you purchased something that we are not going to be occupying, habitating, then there’s no one there to watch it. You could possibly be creating a situation that threatens the public health, safety and welfare,” Wichman said.

“I agree it’s a nice property and if it was really priced to sell it would’ve been sold by now,” Schinhofen said. He added, “We’re coming up to the first of the year where we’re finally going to have a say on what could be done with the fairgrounds.”

He was still upset the county didn’t take up an offer by the owners of Spring Mountain Motor Sports to donate a $4.5 million water and sewer system to the county.

Former Pahrump Town Board member Paula Glidden, who also works in real estate, recalled when they fought to get $3 million for a skate park. The former town manager wouldn’t allow a presentation on another project, park improvements at Kellogg Road, she said.

“When we looked at the original fairgrounds out on the highway, the costs were so expensive we didn’t feel the town or county would have the possibility to make it a fairgrounds out there,” Glidden said. By contrast, referring to the Binion Ranch, she said, “there’s huge possibilities there in that we have a lot of the infrastructure there and the historical aspect is huge.”

Schinhofen said the county spent a year and a half studying whether to acquire Pahrump Utilities Company. He said the water rights at the Binion Ranch could be valuable but was against buying it without exercising due diligence.

Cox replied to the arguments against a purchase.

“There’s money in the endowment fund and there’s other properties that can be sold and that money put into this particular piece of property. There’s a multitude of traffic that goes to parks already. Basin (Avenue) is already an inlet and outlet, we don’t have to spend money, Basin already has a stop light at (Highway) 160, that would drastically reduce problems with traffic there.”

It would also free up Petrack Park for other events, she said.

“The Calvada Eye here has 32 acres. The county spent $3.2 million for that, it was the best investment the county made,” Cox said.

Assistant County Manager Joni Eastley said the county would have to look into the financial aspects. She said they still have to make payments on the jail bonds and other obligations.