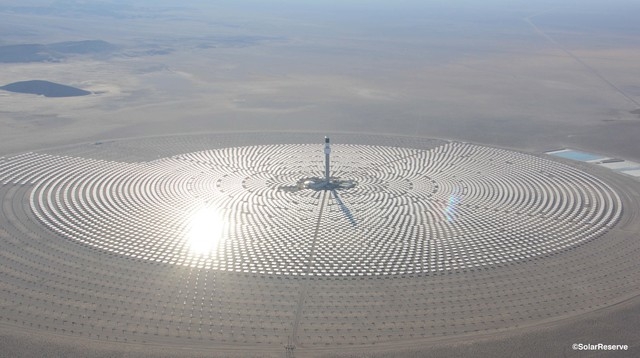 If ever there was a project making history in Nevada, it would have to be SolarReserve’s massive Crescent Dunes Solar Plant which is nearing completion outside of Tonopah.

SolarReserve CEO Kevin Smith said the one-of-a-kind technology has attracted the interest of other countries wanting to leave a lesser carbon footprint on the Earth.

“We’ve had groups come through the site from about 25 other countries. Once the commissioning phase is completed and the plant is in full operation, I expect those numbers of visitors to increase.”

He said Crescent Dunes will give tours to a group from Spain and another from Canada over the next few weeks.

The project has been under construction since the Department of Energy finalized a $750 million loan guarantee in mid-2011 for the 110-megawatt solar energy plant. The project is in the final stages of commissioning.

The commissioning, which began in mid-February of this year, is being done in stages according to Smith who said, “We have broken the plant into 40 or 50 systems. Of those systems, about 50 to 60 percent are complete.”

He said one of the most important systems checks involved the 10,347 heliostats which will eventually be directed to capture the sun’s rays and direct that energy to the receiver located at the top of the 540-foot tower in the center.

“I went up in the tower when the technicians were working with maybe 200 of those heliostats. Watching them move in unison was like watching a space-age ballet. The testing has been completed on all 10,347 of them and they can be controlled through a main operations center in the control room. That was a big step.”

He said most of the issues have been with things like air systems and blowers and getting pumps fired up. “We haven’t had anything significant. It’s just crossed wires and piping systems.”

In June, the solar plant used propane to liquefy salt and fill one of the storage tanks. “We have 60 million pounds of molten salt in storage so we can test other systems related to the actual production of electricity,” Smith said.

There are still around 400 to 500 employees on the site at present. “Those people are mostly craftsman checking system loops and working on the back end of the project doing things like insulation to preserve the heat and removing scaffolding in the tower,” Smith said.

Permanent positions will number 37 employees, according to Smith. “We’ve already filled 28 of those,” Smith said. And of those positions, about half of them are Tonopah residents.”

The Crescent Dunes project is expected to “go live” in December.

To promote the project, SolarReserve released a series of short videos called Bottling the Sun. The videos depict the construction of the project and celebrate both the workers and the town of Tonopah and its welcoming and supportive residents.

Bottling the Sun videos may be viewed on Youtube at the following links: