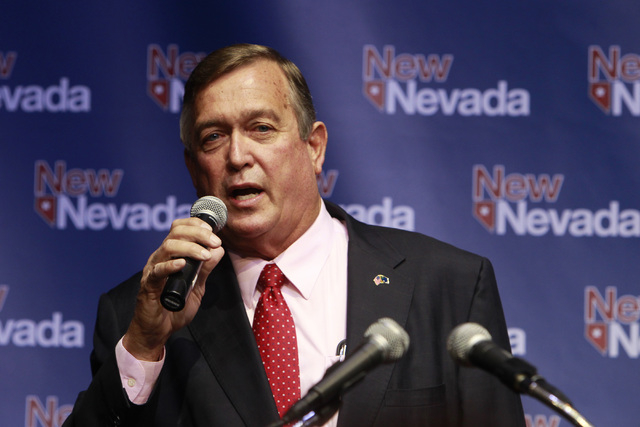 WASHINGTON — Fifty-seven of the freshest faces on Capitol Hill packed into a meeting room on Wednesday, newly elected members of Congress taking part in the traditional lottery to claim office space for their freshman year.

The mood was light as they walked — some danced — to the front of the room to pull a numbered disc from a box.

When his name was called, Cresent Hardy ambled to the dais without drama, thrust in his right hand and extracted his chit.

“Mr. Hardy has drawn Number 14,” the emcee announced, and cheers arose at the fortune of the new lawmaker from Nevada who had selected one of the higher numbers to qualify for one of the nicer suites. “That’s the luck of Las Vegas,” one wag said off to the side.

Hardy afterward professed not to be moved by the draw.

“I’m not thinking too much about it,” he said. “I didn’t really care. I’m not here for an office. I’m here to serve.”

Hardy demurred at talking with a reporter and turned down most interviews during the week he spent in Washington for freshman orientation.

It’s a rite of passage where the heights of election night transition to the humdrum of learning how to manage an office budget of roughly $1.1 million, hiring staff, understanding ethics rules and using personalized swipe cards to vote.

New members won’t obtain their official lapel pins until they are sworn into office on Jan. 6.

Hardy, 57, a Republican former assemblyman from Mesquite and construction company co-owner, unseated Democratic Rep. Steven Horsford in the 4th Congressional District that includes parts of North Las Vegas, all of Nye County and all of five rural counties.

His victory was one of the more surprising for Republicans who added at least 11 seats, more than even they expected in a nationwide Election Day wave.

Hardy was propelled by a late dash of television ads bought by the conservative Crossroads GPS superPAC, coupled with the under-performing turnout of Democratic voters. Hardy said afterward that he thought he still would have won without the late push.

Either way, Hardy already has a target on his back for re-election in 2016. Horsford has said he will explore a comeback, and the Republican Party already has listed Hardy among freshmen who will probably warrant extra help on their campaigns.

But all that seemed far away over the past few days as Hardy sat in briefings alongside 40 other new Republicans and 17 Democrats who make up the 2014 freshman class.

Upon their arrival Republican newcomers were given a 125-page spiral-bound sheaf entitled “Hit the Ground Running” that included tips on hiring staff and opening district offices.

Hardy on Thursday was preparing to announce he has hired a chief of staff — Alan Tennille, who held the same job for retiring Rep. Buck McKeon, R-Calif. During the week he also huddled with fellow Nevada Republicans Joe Heck and Mark Amodei. He and Amodei talked about the possibility of sharing a Capitol Hill apartment.

Heck said he guided Hardy in how to lobby for his committee choices, which include the Resources Committee that has jurisdiction over public land issues important to the rural parts of the district.

“It’s easier, I think, for folks like Cresent and me because we had prior legislative experience,” said Heck, a state senator before entering Congress in 2011.

“Once you get through (orientation) and get settled in January, you’ve hired your staff, you’ve got your committee assignments, it’s like being in Carson City, just on steroids.”

Amodei advised Hardy to be prepared for a re-election battle. Democrats might have been napping in 2014 but 2016 is a presidential election year, and “when they really crank up their ground operation it’s a formidable thing anywhere in the state, and not just for Cresent.”

“You’ve got to hit the ground running,” Amodei said he told the newcomer. “Your term is not two years because you’re going to have a target painted on your back. You’ve got to multi-task in a huge way to make the people who voted for you look smart.

“One of the tenets of any re-election is, are you doing good work and are you hanging out in your district?” Amodei said. “I’m a firm believer in well done is better than well said, so he should concentrate on well done.”