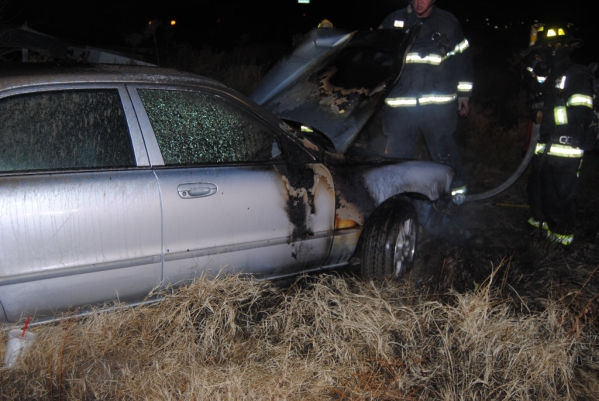 Heavy winds combined with cold temperatures, rain and sleet in parts of the valley presented numerous challenges to Pahrump firefighters over the weekend.

Friday, however, greeted crews with mild temperatures as they were dispatched to the Calvada Eye for a report of a suspicious package leaking an unknown substance.

“As we were responding, we were told that it was not a life-safety issue,” he said. “We found the suspect items located on the north exterior sidewalk outside the building, where one of the boxes was saturated with an unknown-type substance. We assembled a small team for a reconnaissance assignment.”

As a precautionary measure, a full-command structure was established, where the initial investigation revealed the leaking materials were destined for a location in California.

“The plastic containers did not properly contain the substance that was within and thus saturated the box,” Lewis said. “It appeared to be sent to an incorrect address. It should have been shipped to a California location, but instead it ended up in the Calvada Eye.”

It took crews roughly an hour to mop up the scene.

“It was quickly mitigated with no injuries or property damage sustained,” Lewis said.

Hours later, fire crews were dispatched to the area of West Betty Avenue at Barney Street for a single-vehicle rollover crash just after 7:30 p.m.

Upon arrival, crews found the sole occupant trapped inside the vehicle.

“The vehicle was found resting on its passenger side,” Lewis said. “Crews stabilized the vehicle, extricated the patient and transferred patient care to Mercy Air-21 who arrived on scene. The injuries appeared to be survivable and the sheriff’s office is investigating as far as how that accident occurred.”

On Saturday morning crews encountered what was an unconventional call for service just before 8:30 p.m., when a pet owner’s dog became trapped inside its carrying crate.

Lewis said the incident occurred at Petrack Park, just yards from Station One.

“It was right here, and due to the dog’s anxiety over the situation, it was a prudent thing for us to become involved,” he said. “The legs became trapped within the steel bars and the animal was in an elevated and excitable state, where it bit the owner. Not only did we have an animal rescue from the confines of its container, but also we had an injury sustained.”

Crews freed the animal by cutting out an area in the crate, where the dog was eventually freed, while its owner declined medical treatment.

Roughly 90 minutes later, crews were summoned to the area of West Irene Street and Blagg Road, for a report of a vehicle fire.

“Upon arrival, we found the engine compartment was fully involved, extending into the passenger compartment,” Lewis said. “Crews arrived several minutes after the dispatch and there was no immediate exposures. The crews quickly went into service and extinguished the fire with no further extensions. It appeared to be a mechanical malfunction which caused the fire.”

Ian Deutch Memorial Park was the scene of a dumpster fire just after 5 p.m. on Saturday.

Upon arrival, crews found the dumpster fully engulfed, with no immediate structure exposures.

The fire was quickly extinguished. No injuries were reported.

A single-vehicle crash just after 7 p.m. on Sunday summoned emergency crews to the area of West Street and East Wilson Road.

Lewis said a fire erupted shortly after the crash, near the Ishani Ridge neighborhood.

“It was an engine compartment fire that was extending into the passenger compartment,” he said. “The vehicle was off the roadway and the driver had self-extricated. The crews suppressed that fire without any further extension and there was no nearby exposures. The occupant decided he did not want to be medically treated.”

Lewis noted the weekend weather caused crews to be aware of lightning strikes around the valley as they were performing their duties.