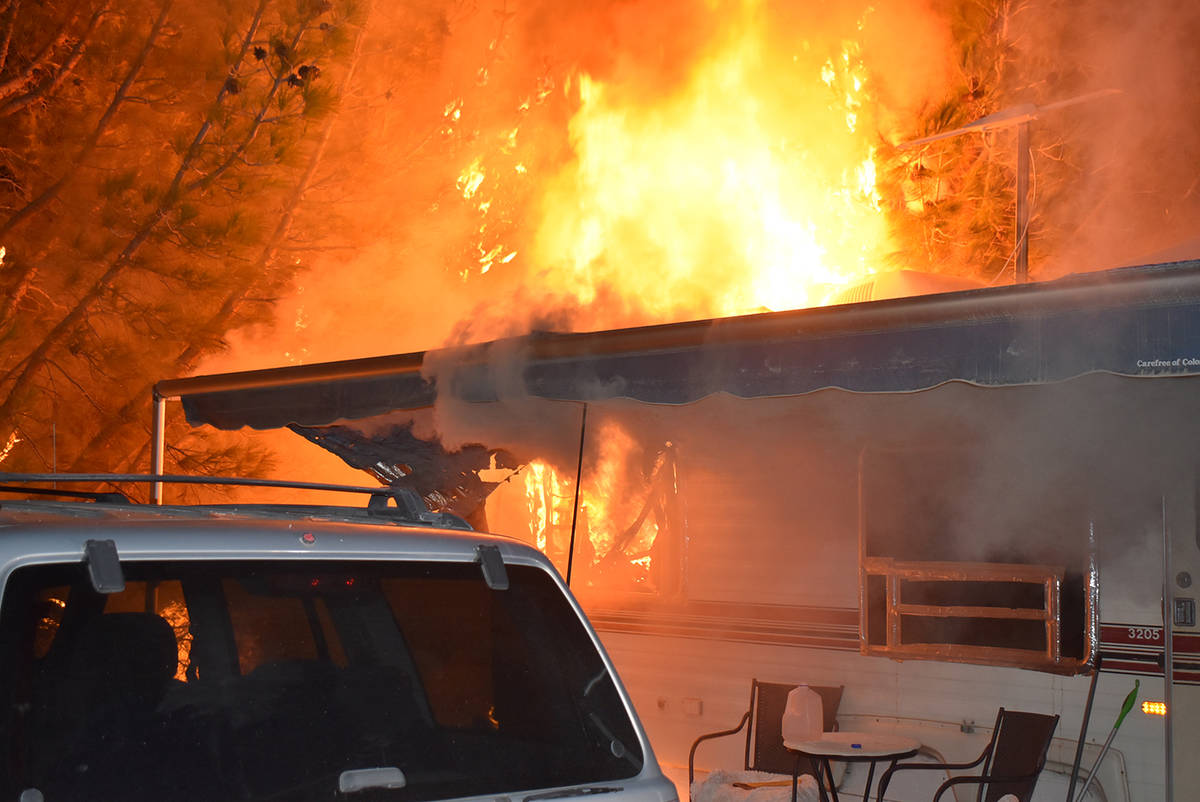 Special to the Pahrump Valley Times What originally was dispatched as a vehicle fire was upgraded to a structure fire on the 1800 block of North Dupont Drive just after 7 p.m. on Friday, Sept. 11. At least one person who was medically evaluated, declined transport to the hospital. The cause of the fire is thought to be accidental. 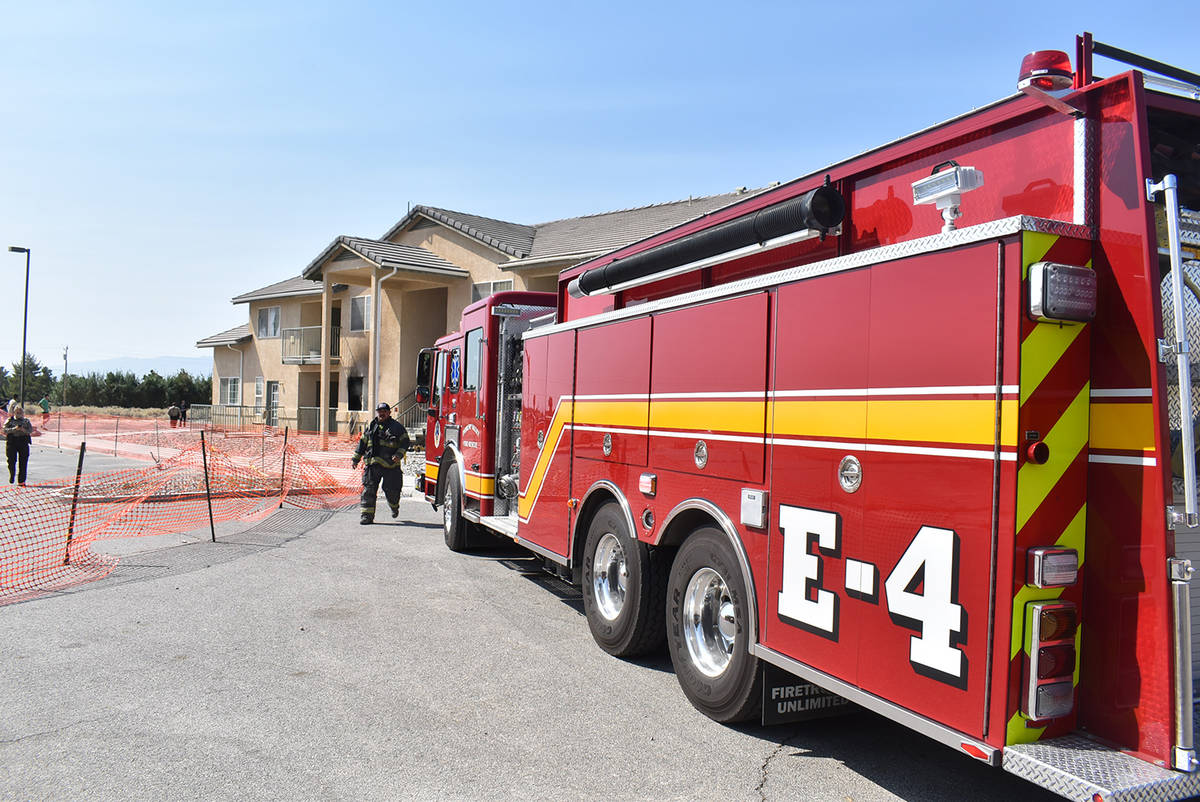 Special to the Pahrump Valley Times One person was transported to Desert View Hospital following a room and contents fire at the Courtyard Apartments along the 2800 block of Dandelion Street on Friday morning, Sept. 11. The individual who was transported is suspected to have started the fire. No additional injuries were reported. 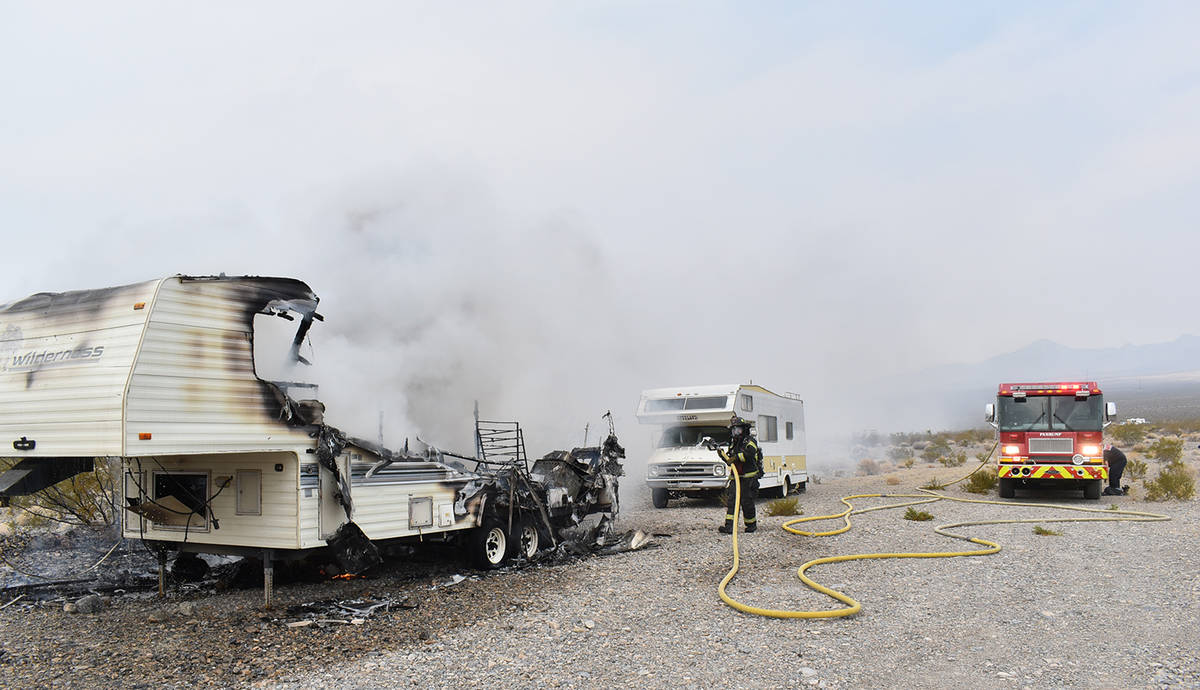 Special to the Pahrump Valley Times On Sept. 18, fire crews responded to a report of a structure fire involving a group of trailers along the 2500 block of Giordano Court at approximately 12 p.m. Fire Chief Scott Lewis said there were no occupants and no injuries reported. The cause of the fire is thought to be accidental in nature. 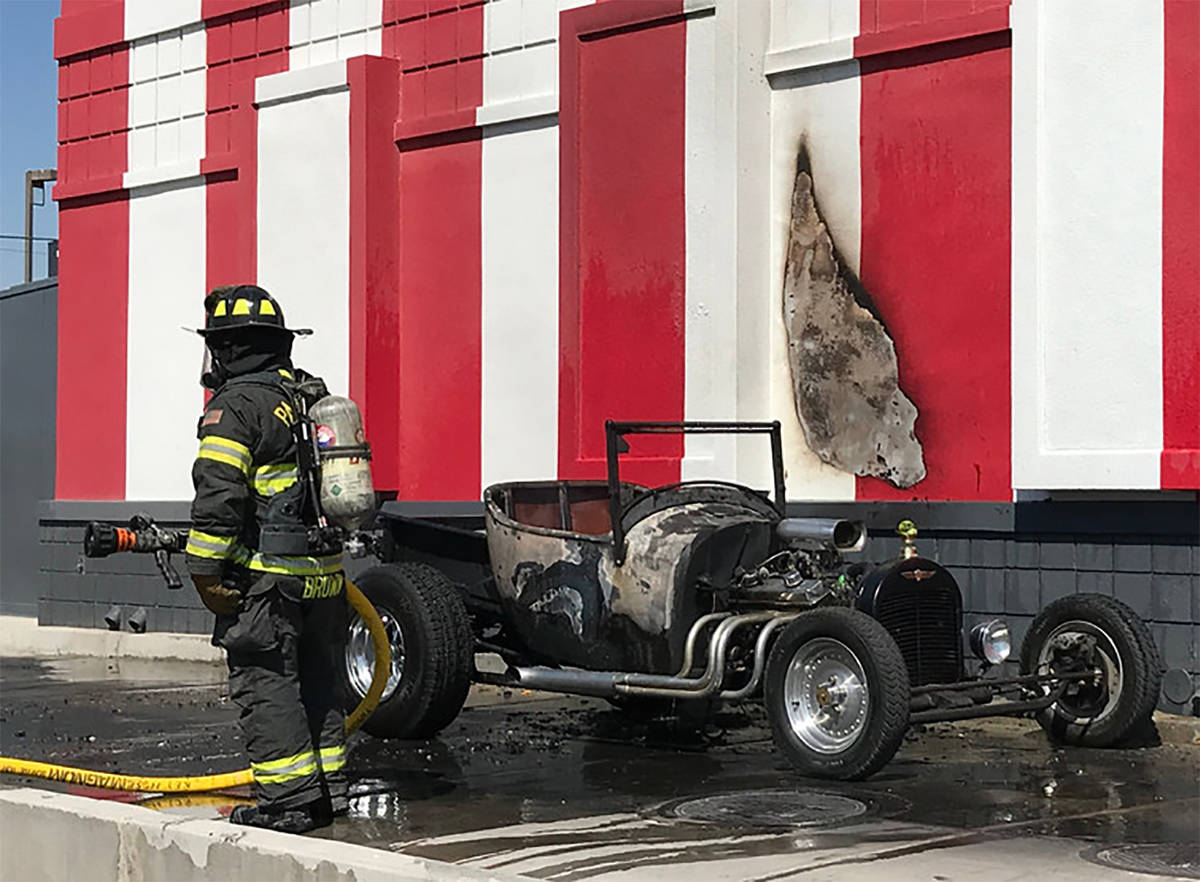 Special to the Pahrump Valley Times An antique classic T-Bucket hot rod sustained major damage while in the KFC drive-thru on Sept. 20 at approximately 1:40 p.m. Though one person was medically assessed, they declined transport to the hospital. The cause of the fire is thought to be from a mechanical malfunction, according to Fire Chief Scott Lewis.

Pahrump Valley Fire and Rescue Services crews responded to numerous fires throughout the valley this month.

Fire Chief Scott Lewis said crews were dispatched to a reported vehicle fire along the 1800 block of North Dupont Drive just after 7 p.m. on Friday, Sept. 11.

“What originally went out as a vehicle fire ended up being upgraded to a structure fire,” Lewis said. “There were heavy fire conditions across the rear of the property and there was a narrow gateway that didn’t allow the apparatus to go down the driveway, so we had to keep them on the street, but we had additional lengths of line on them.

“The fire had extended to nearby canopy trees, and conifers. The fire was also threatening a large immediate accessory outbuilding, an SUV, a second garage, and a double-wide manufactured dwelling.”

Lewis went on to say that crews did a great job as they mounted a defensive exterior attack despite the venting propane.

“They quickly controlled the fire and extinguished the exposure ground cover without incident,” he said. “There was one person, who was medically evaluated, but didn’t want any medical treatment. The fire is thought to be accidental in nature, and undetermined.”

On Sept. 18, crews responded to a report of a structure fire involving a group of trailers along the 2500 block of Giordano Court at approximately 12 p.m.

“Crews investigated and found an apparent homeless-type environment,” Lewis said. “The center trailer was fully involved and had immediate exposures on either end. Despite the rough road conditions to get to this fire, crews made their way and quickly extinguished the fire with no extension. There were no occupants and no injuries, and the fire is thought to be accidental in nature.”

On Sept. 20, fire crews responded to the drive-thru of Kentucky Fried Chicken at 1540 East Highway 372, for a vehicle fire at approximately 1:40 p.m.

“As we were responding, we were notified that the fire was extending to the building. The assignment was then upgraded to a structure fire, bringing in additional resources,” Lewis said. “We arrived on location and found an antique classic T-Bucket hot rod car that was up against the building. The vehicle was fully involved and there was a scorch mark on the building, but the building was quickly protected, and the fire was extinguished quickly with no further extension. There was one patient that was medically assessed, however there was no transport. The cause of the fire is thought to be from a mechanical malfunction.”

On Sept. 22, fire crews were summoned to the Courtyard Apartments on the 2800 block of Dandelion for a room and contents fire just after 11 a.m.

“Crews arrived to find smoke and fire showing on the first floor of a two-story apartment building,” Lewis said. “The smoke specifically was emanating from an open window, or a broken window on the front side of the building. We completed a scene size-up and risk assessment and found that it appeared to be a room and contents fire, with potential exposure to the remaining units in the apartment building.”

Lewis also noted that all occupants of the building were accounted for.

“One occupant, who was observed running from the scene, was later located in an unconscious state,” he said. “Crews immediately provided EMS care and transported that patient to the hospital. It turned out that the person ended up being a suspect in this fire, and is under investigation with the State Fire Marshal’s Office, the Nye County Sheriff’s Office, and Pahrump Valley Fire and Rescue.”