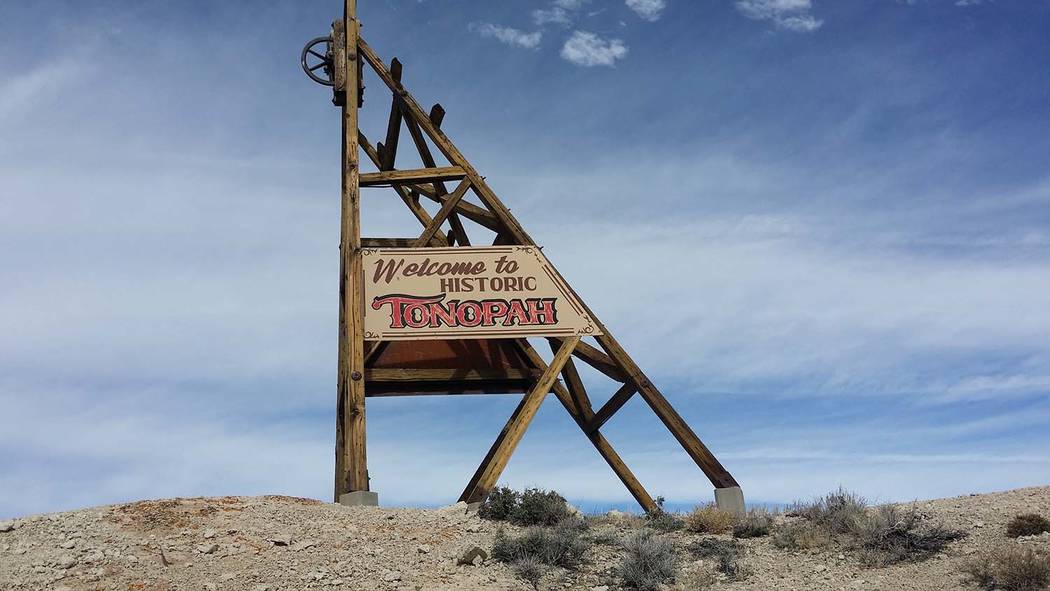 David Jacobs/Pahrump Valley Times Written sources on Nye County history and the oral history interviews and photos were used to write and publish some 20 volumes on the history of Nye County and its communities, including Pahrump, Amargosa Valley, Beatty, Tonopah, Manhattan, Round Mountain, Railroad Valley, Smoky Valley and Tybo. A marker for Tonopah is shown in this photo.

A semi-truck driver hauling what was described as low-level hazardous waste along Highway 95 near Tonopah, was transported to a Las Vegas hospital after suffering from an unknown medical condition.

The truck’s final destination was the Nevada National Security Site.

“The Tonopah Volunteer Fire Department was dispatched for a report of a possible motor vehicle accident involving a semi truck, possibly containing some low-level hazardous waste,” Lewis said. “They responded with their rescue and a medic unit out of Tonopah.

“Upon the arrival of Chief Rob Elliot, he discovered that he had a semi truck off of the roadway. The truck was upright and it had not impacted anything. There were no other vehicles or other fixed objects involved. It did not overturn or anything along those lines.”

As a result of the driver’s condition, Lewis said the scene size-up and risk assessment revealed that the driver apparently sustained a serious medical emergency.

“The fire department assisted the EMS crews on packaging and transporting that patient,” Lewis said. “They rendezvoused with Mercy Air and that patient was transferred to a Las Vegas-based hospital.”

Regarding the material being transported, Lewis noted that the situation did not pose any dangers.

“The Tonopah Volunteer Fire Department assessed the semi truck’s manifest and found it was low-level material, thus it was a non-issue,” he said. “They also utilized an imagery device to determine that there were no serious issues. The load was eventually transported without incident to its final destination, which was at the Nevada National Security Site.”