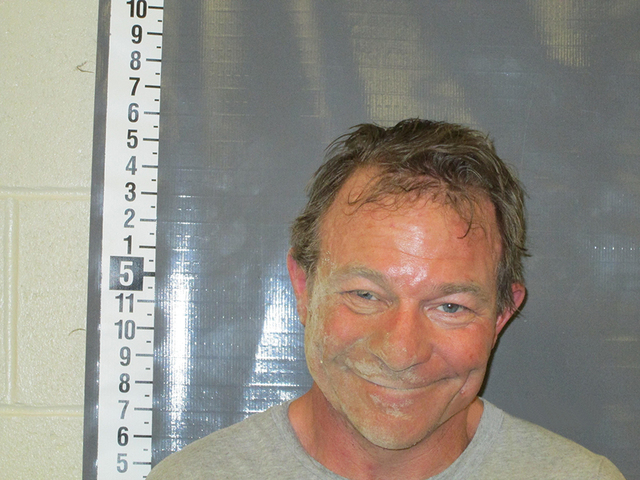 Police arrested a man earlier this week after he allegedly forced his way into a woman’s apartment and demanded she give him her prescription medication.

According to a declaration of arrest in the case, on Tuesday Nye County Sheriff’s deputies were dispatched to the area of Mt. Charleston Drive and Calvada Boulevard for a report of a man threatening to kill himself.

The suspect, later identified as Michael Allen Williamson, had reportedly gotten into an argument with a family member and then run out of his house with a handgun.

When police were unable to locate him near the home or at a nearby home of a friend, they had dispatch contact the man’s cell phone provider to pinpoint his location using his phone.

Deputies were then informed his cell phone was “pinging” in the 1800 block of Pershing Avenue.

Police then contacted the landlord who owned the residence where the man was believed to have fled to, and were informed two people lived at the address and may be home at that time.

Officers knocked on the door and got no response. They also announced their presence outside the garage and received no response there.

After confirming with Williamson’s phone carrier a third time that they had the right address, an arrest report stated they made entry into the home.

Inside, deputies could hear a woman screaming from the master bedroom area. The woman informed police a man had run into her house and was now hiding underneath some clothes in her closet.

Police subsequently found Williamson in the closet and placed him under arrest.

According to his arrest report, the woman who resided at the home told police Williamson had come in and demanded she give him any prescription medication she had. When police knocked on the door, he allegedly told her not to answer.

The woman also reportedly told police she noticed after they had removed Williamson from the closet that seven of her prescription pills were missing from the prescription bottle she kept in the closet.

He was then transported to the local hospital to be medically evaluated before being taken to the Nye County Detention Center to be booked into custody on charges of burglary, false imprisonment and possession of a controlled substance.

Police took one man into custody this week after he was allegedly found to be driving with a blood alcohol content of more than twice the legal limit and ordering his dogs to attack the deputy who pulled him over for the offense.

On Wednesday at approximately 7 p.m. a deputy was dispatched to the Winery Supermart at the intersection of Winery Road and Highway 160 for a report of a person driving while intoxicated.

The man, later identified as Bradley James Kullenberg, had allegedly caused a scene inside the establishment before getting into his pickup truck and driving over to the desert area just north of the convenience store.

When the officer arrived in the area, she reportedly discovered Kullenberg standing outside his truck with his two dogs, a German shepherd and pit bull, who were not leashed.

As the deputy attempted to speak with Kullenberg, she noted he appeared to be intoxicated. She then requested that Kullenberg place his dogs back in his vehicle and to present her with a copy of his driver’s license.

Kullenberg allegedly refused to give her the information at first and became more and more uncooperative and aggressive as they talked.

Due to the way he was acting, the deputy then tried to detain Kullenberg in handcuffs, but he allegedly resisted, pulling away from her and running toward his vehicle while ordering his dogs to attack the officer.

When another deputy arrived on scene, they were able to pull Kullenberg back out of his vehicle and place him in handcuffs.

While searching his vehicle, police reportedly found an open bottle of liquor as well as a cup containing what appeared to be an alcoholic beverage.

Kullenberg was then placed under arrest for DUI, open container, resisting and two counts of dogs at large.

He was then transported to the Nye County Detention Center where he allegedly admitted to driving from the convenience store to the area where he was arrested.

He then allegedly agreed to submit to a breath test which showed he had a blood alcohol content of .0185 percent at the time of his arrest.