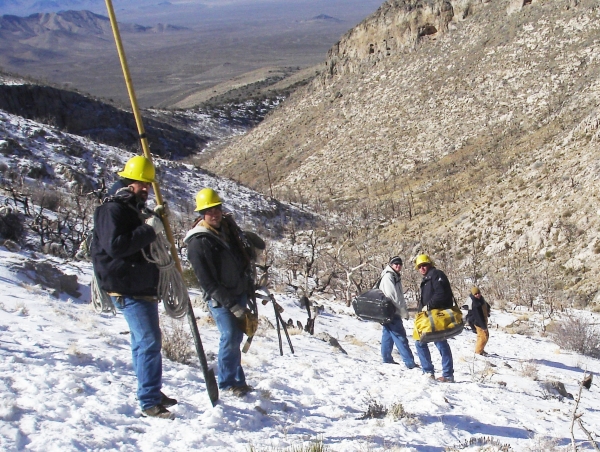 A power outage on Mount Potosi late Wednesday evening halted internet service to thousands of customers and several businesses who rely on Rise Broadband and LV.Net for their internet service in parts of Nye County and surrounding areas.

The 11:30 p.m. interruption, according to Valley Electric Association’s Tom Husted, was due to harsh overnight weather conditions on the 8,517-foot peak in the Spring Mountain Range southeast of Pahrump.

Partial, spotty service was re-established early Thursday afternoon. However, it went back down around 6 p.m. and remained unavailable at press time.

Husted noted a generator which powers communication facilities on the mountain failed to kick on after Wednesday night’s heavy freeze affected power lines.

“Obviously with the weather we had on the mountain, there was snow, ice and rain, so it’s very easy that you can have an ice buildup on those lines on the mountaintop which can cause problems,” he said. “For a large portion of those consumers and customers up there, their backup generator did not kick in. They have backup generators up there, but when it doesn’t work in these kinds of situations, it really compounds things.”

An additional challenge Husted mentioned, was the remote location where crews had to traverse to reach the site and make repairs.

Snow and ice prevented crews from driving to the site, thus they were forced to walk with their equipment.

“If the roads are impassable, the crews have to walk for miles,” he said. “We do have all-terrain vehicles to assist us with not only this mountain top, but others, and they utilize those to the extent they can. If there’s a situation which involves a lot of equipment, then it might take multiple trips up the mountain.”

Valley Electric Association was one of just a handful of businesses and entities that were not affected by the interruption.

“Our internet service has not been affected because we’re on Valley Communications High-Speed Broadband,” he said. “We have several gigabits of capacity here on redundancy fiber-optic lines that serve us, and will soon serve the entire community.”

Pahrump’s sole RadioShack location was affected by the outage.

Manager John Dolin said his customers could not complete their transactions by swiping credit or debit cards.

“We could only do cash sales, but the customers seemed to take it in stride,” he said.

The outage did not appear to affect operations at the Pahrump Nugget Hotel/Casino, as customers were busy playing machines as usual on Thursday.

Pahrump’s Pathways is described as a non-traditional school where students do their coursework and take tests online.

Principal Karen Hills said students who had internet service at home were not affected by the outage.

“If they’re in the same situation we are, then they cannot access the Internet,” she said. “We are looking to try to get our own in-house server for the curriculum because we could not have students do anything here on campus. Our students really only have to come when they take their tests. The next time they come and take their test they will take two of them. It does create problems in the sense that it depends on what internet service they have at home.”

Husted, meanwhile, said outages of such magnitude as Thursday’s are not very common in the area.

“Jan. 7, 2007, was the last significant weather-related outage that we’ve had on Mt. Potosi,” he said. “Of course, being a high mountain location, it’s also a communications site for various private companies and federal and state agencies, including Valley Electric Association. It’s just very tough terrain and sometimes when there are weather-related outages, it can be difficult to quickly fix, just due to the geography.”