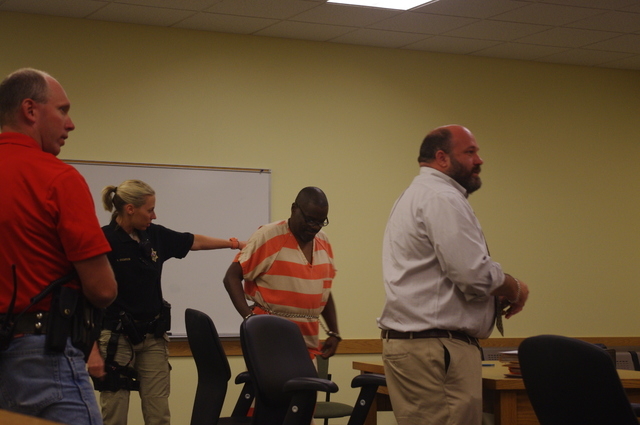 A first degree kidnapping charge was added to the litany of criminal counts faced by an HIV-positive pastor accused of lewdness with a minor last month.

He was arrested on July 25 after the family of a mentally disabled 17-year-old boy complained about the pastor luring the juvenile on July 17 into his home and allegedly hugging, kissing and touching the boy inappropriately.

The minor told police the pastor grabbed his pants at one point and looked inside his clothing at his privates.

Ferguson, following his attorney’s advice, didn’t testify. Justice of the Peace Ron Kent closed his courtroom to the press and public while the juvenile victim testified. The victim’s mother and a detective on the case each provided testimony in open court.

The boy’s mother — the Pahrump Valley Times does not identify victims of sex offenses — said she and her family of nine children moved to Pahrump in October and joined Ferguson’s church a few months ago. She said she trusted the pastor and that her children grew close to their new church family.

“I thought he was a wonderful person,” she said of Ferguson. “Because he had this way of making you feel like nothing you were going through in life, everybody has a past, but everybody’s future is not determined yet, you can change things in your life by being positive, coming to church and praying regularly. He made you feel like you were a person worthy of being in church again.”

She told the court her son suffers from several serious mental disabilities, including being bipolar, having anxiety disorder, mild autism and frequent depression. She said he reads and writes on a third-grade level. He also has been institutionalized twice.

“Sometimes it’s a struggle to do things that you are normally supposed to do, like showering, or if I give him an instruction, I have to be detailed and repeat it constantly,” the alleged victim’s mother told the court. “His mind is set toward one thing. My house could be burning down, and if he wants ice cream, that’s what he is going for. He has no sense of danger. He doesn’t react to danger normally. He learned his reaction to pain and danger from watching other people’s reactions.”

She described to the court how she learned of the pastor’s behavior, at first believing it was possibly a misunderstanding. She said her son came home from his girlfriend’s house and gathered his brother’s and sisters on the porch to tell them what occurred.

“They came in and my son said, ‘mama, we need to change churches.’ I said what you mean? I said I like where we are, if you want to go somewhere else, you need to let me know. He said, ‘no, I want you, my brothers and my sisters,’ his exact words were ‘eff that, we need to go to another church because your pastor tried to eff me,’” she said.

That’s when the police were called.

Det. Michael Eisenloffel said Ferguson denied the allegations at first but progressively admitted to the behavior. A voice stress test was administered to Ferguson but the results were not admitted. Ferguson’s attorney, Jason Earnest, strenuously objected to any mention of the test in court.

“It is an abortion that it is allowed to even be used … it is a tool of interrogation, it is a tool to trick defendants,” the lawyer argued.

Deputy District Attorney Tim Treffinger agreed not to mention the voice analysis results and the judge agreed it should remain out of the record as well.

Earnest stipulated during the hearing that Ferguson has AIDS, the disease caused by HIV, and also admitted that his client had “indulged in gay sex” in the past. Earnest made the stipulation in an effort to keep more inflammatory information about how the preacher contracted the disease out of the hearing.

During closing arguments, Earnest called the state’s case weak and some of the charges specious. He even claimed that after hearing the victim’s testimony, he wasn’t convinced of the seriousness of the juvenile’s mental illness.

“The boy, he’s mentally ill like a fox. He testified well. He answered my questions, wasn’t sure, he got coy with me, asked me some questions, wanted to fight back a little bit … he wants to go to college. He’s mentally ill enough to have a fiance and breed and get married. God, let’s hope he does that. He’s not mentally ill,” Earnest said.

Ferguson is charged with attempted exposure of HIV, luring a mentally disabled person, open and gross lewdness and first-degree kidnapping. He faces a potential five years to life in prison.

Ferguson was also charged with driving under the influence in an earlier unrelated criminal case. A March 12, 2015 bench trial was scheduled for that charge.

Meanwhile, the pastor was bound over on the charges stemming from the July 17 incident after all of the testimony was heard. He is scheduled to be arraigned in District Court on Oct. 13.

Earnest sought a bail reduction for Ferguson, who remains in custody in lieu of $50,000. Kent refused to lower the suspect’s bail, however.

The married pastor was joined in court by family and members of his church, none of whom wished to comment.